Unfortunately, I was unable to respond further to the “a Modest Proposal” post (A Modest Proposal - #72 by Ivan_Tellez) because I got home too late. I don’t agree with @Geoff_Perlman 's words at all when he says:

Sometimes the bug is in the underlying OS for example. Then we have to prioritize them which typically (but not always) means those that impact the greatest number of users and are difficult or impossible to workaround come before bugs that appear to be impacting just a few users and are very easy to workaround. Each bug is somewhere on that spectrum.

I request to enable the whole list of feedback cases in order of score. This is because if it were true what he says, we should see the list of bugs of most interest to users (and not just the requested features). If there is a scoring system it should be respected, and issues that have no score should not be fixed first. That’s why I created a feedback case for this request: feedback://showreport?report_id=66456

That is a “non-argument”, or what we used to call a “Microsoft answer”:

A helicopter pilot gets lost in dense fog, and his radio has failed. He nearly runs into a skyscraper, but can open the door and shouts to a man on a balcony: “Where am I?”. The man shouts back: “You’re in a helicopter!”

It also doesn’t mean it can’t be fixed, so what was the point?

To actually answer the question:

That would be easily implementable in Feedback, and might be useful, so the answer is (no points for guessing as you already did it): file a feature request.

Content removed from here too. Not sure why I bothered.

I have never demanded that all bugs be fixed. Each bug has its own story. But hiding the feedback cases (don’t tell me you can search for them because that’s crazy), hiding the sorting, getting users to create detailed feedback to reproduce the problem and then ignoring them is damn wrong. Giving the option to assign points and not respecting them makes no sense. Voting new features and bugs together without two lists makes no sense. You don’t want to fix it? You can’t? Take responsibility. If there are memory leaks, wrong design logic, don’t pretend nothing is wrong. Surely it’s a problem in your code. Fixing only the easiest things and consequently not helping/protecting the customer is wrong.

Xojo have always said that feedback points are only one consideration when prioritizing their work. It helps break the tie as it were. I find Geoff’s statement to be perfectly reasonable.

If there is a feedback case that you can’t open; this is typically the result of the case being marked “private” between the submitter and Xojo.

Yes, it would be helpful if the Feedback app returned a message saying something like “Case xxxxx is marked private” after you search (or click a FB link), but it doesn’t.

Regardless, I just thought it important you should know that’s why you can’t open some cases.

Likely one of the reasons a case is marked private is because it probably contains proprietary information or code (from either the user or Xojo), which makes this a good feature to have.

Xojo have always said that feedback points are only one consideration when prioritizing their work. It helps break the tie as it were. I find Geoff’s statement to be perfectly reasonable.

Of course points are used to prioritize. I never said otherwise, in fact that is exactly what I am advocating. I’m just saying that this is not being adhered to. I’m not demanding that they be fixed in order, but at least within a number of release cycles, not left there for life. Take the release notes of the latest versions and look at what feedback and score they were fixed with. Most of them have not even been voted on.

If there is a feedback case that you can’t open; this is typically the result of the case being marked “private” between the submitter and Xojo.

When I said the cases are hidden I didn’t mean the private ones. I meant that the viewable lists are all always limited. You can only see the last 150 cases, in the top only 20 and all the others you have to try to search them with keywords. But if you are supposed to use the feedback system not only to report but also to be a tester, you can’t even search for any old bugs from other users and test if they are still broken or not.

I am not offending xojo and I am trying to find a way to make things better. It is useless that some users (more or less always the same) defend these choices of Xojo. If every few days there is someone on the forum complaining it means that things are not going well. I have expressed several times constructive ideas and even then it was ignored is really frustrating. I want to see if instead of between programmers these problems occurred in other situations, it wouldn’t be accepted by anyone.

As nice and respectful as I can be in dealing with the Xojo team, you are really testing my patience. With behavior like this you really don’t deserve a license renewal. But it is a waste of breath once again. Ignored again like all other posts and feedback cases.

I’m sorry you didn’t get more information. As was posted on the Feedback case, there is more to just the Feedback scoring system to figure out this metric, we went into a lot of those details on this blog post, which may be helpful.

Thank you for your input. I had read the blog post a while back, but unfortunately that’s not really the case. In the post it says:

and unfortunately it only shows 20.

While this is only one criterion, it’s an extremely important one because it helps us determine the impact surface of any issue.

However, the thoughts of users are not (as far as it is a criterion) followed. I have a case of feedback in the 100th place that received interest from many users, given the poor performance of Web 2.0. It’s not even marked as reproducible. Or another feedback that shows memory leaks and destructors that don’t work. It’s marked as reproducible and left to fate. If these aren’t the types of bugs that affect everyone I wouldn’t know what else to think of. Just security bugs? only PRO users are privileged? the web platform doesn’t sell that much so it’s ignored? Since web 2.0 came out, considering the complaints, I would have expected a lot of fixes but instead they think of something else… I hope it will be the same for android otherwise it is not fair to web users.
Plus why is it not possible to display more feedback than the default ones? It seems to me that they are omitted on purpose. Give me the possibility to display all the feedback divided between bugs and features for each environment (web, desktop, iOS) if you have nothing to hide. I’ll be happy to help test other people’s reports, maybe evaluate bugs I wasn’t aware of without having to spam the forum. This only causes ill feelings and hate.

Don"t worry Attilio. They will eventually get to you.

In all fairness, that bug has a grand total of 2 subscribers. For the most part we prioritize bugs based upon the number of users they impact and whether or not the issue can be worked around.

All fairness, you’re missing the point.

@Geoff_Perlman since I’ve been responding for a couple of posts on the forum and haven’t received a response from you, instead of fueling more controversy over old feedback, can you respond and give me your perspective on everything I’ve written? 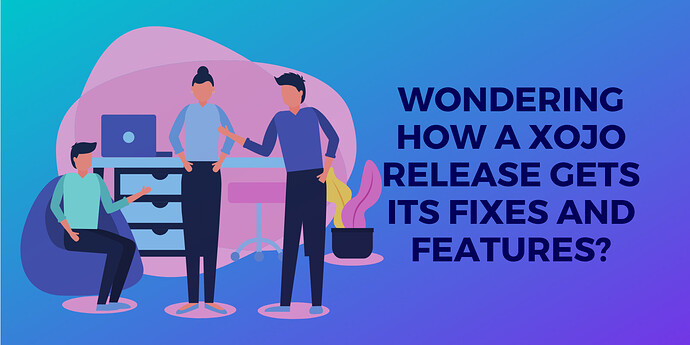 How do we decide what goes into Xojo? – Xojo Programming Blog

I’m locking this thread because it has been addressed, even though some may not like the answer. If you want details you can refer to the blog post. You don’t have to agree with the way Xojo handles bugs. Suggestions for improvements can be entered into Feedback itself.