XDC sessions should be also available per presentation

Suggestion.
As a “kind of” advanced user, I don’t see myself buying the full pack of videos by the full price, but I could buy some topics of interest. The current full pack only way, miss sales for people with such profile. As a matter of suggestion, I wished a shopping cart “pick what you want” too option, like: 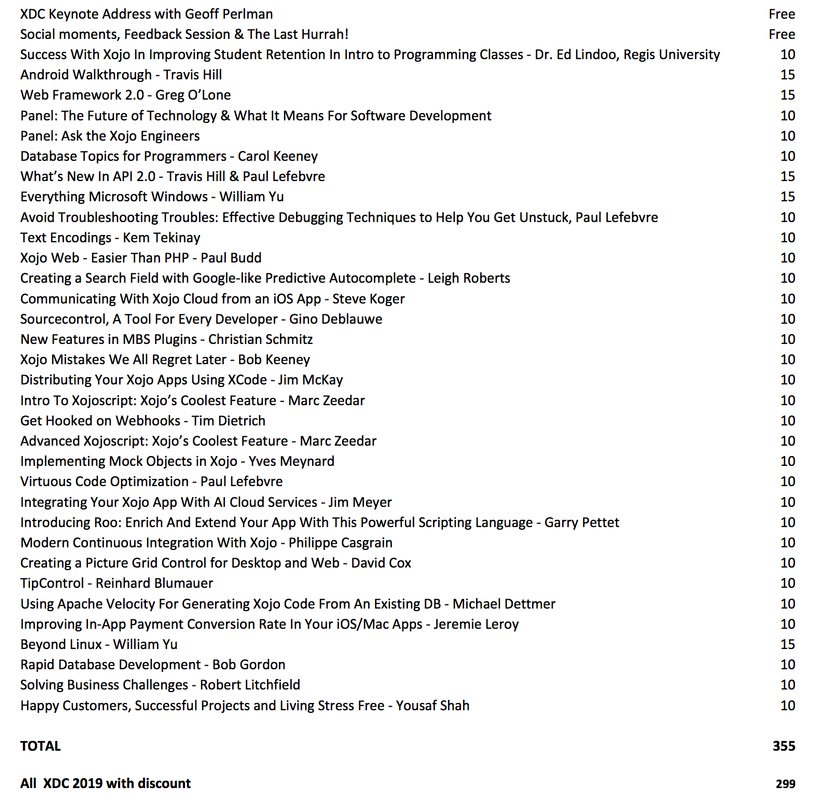 I second this suggestion. Some of these i’d watch (maybe a few) but the whole thing? Probably not.

[quote=435838:@Norman Palardy]this idea gets floated around every year after XDC and the videos get released
so far they’ve never done it and I fully understand why[/quote]

But I don’t. That’s because it’s hard to handle a mass of small payments? Don’t like $70 in 4 months from an user because there’s a preference for $0 for the entire year? I don’t get it.

and this company did their business with the videographer and video editor differently
they werent paid just a flat fee - although they did get part of their remuneration as a flat fee
they got a % of sales over a certain base amount and continued to make that percentage on all additional sales
so it was in the companies best interest to sell lots of every video and so thats how they organized things and none of the videographer, video editors or company lost money on the deals
and they sold a ton of videos to those would could not make the conference (which always sold out VERY quickly as they were in places like Hawaii, Aspen & Mt Washington in New Hampshire)

The conference must sell the experience, the gathering, beyond the content. Watching selected topics don’t give you the experience. Breaking the full video in pieces is a work the current staff should be able to do, an intern, or even the CEO (Yes, small companies do whatever is needed using all the resources). No need to pay a “videographer” for such small job, of splitting, adding a intro with a fade in, and fade out at the cut. Users are different, they will pick very different sets, and may return later and pick more, for months. A bundle must have a monetary reason to be chosen, as a noticeable good discount as suggested. The full edition can be sold only for the first month while the second edition breaking topics are done. Who really wants the content ASAP will buy it, those buying a “let’s see the presentation x this weekend instead of netflix” can wait. There isn’t an “I’m not going to the next one because I watched 5 videos of the last event”, but there are probably hundreds of “I’m not going anyway” around the world, and “I’m not going to watch it the way they want force me to”. The times changed. CDs with 12 musics where you just like 2 don’t sell anymore, they stream each one, and let you pick whatever you want. The current way is not milking the cow correctly to the max.

They did sell one video at a time but they also enticed you to buy 5, or 10 by discounting them decently in bundles

And they sold a lot of them in those bundles

Xojo doesnt do that
Why?
I have no idea - they just dont
It could be a hassle to set up in the store or set up pricing or … I really dont know why they dont they just dont

Nope. Not a discussion about internal preferences. I don’t care. I’m not the director or CEO. All I am entitled to do are suggestions and I did it. Gave my 2 cents of intro to 21st Century, explained the losses, and that’s all.

By the way, nice to “see” you, Norm. You were absent for too long in the forum.

And per video would certainly not be $10, but more $99, so three make it worth to buy the whole collection.

this one video sell has been discussed here after each xdc, and never came as individual cells.
I also would buy some video but not all. so they got $0 from me instead of $50 may be for 3-5 videos ?
that’s business. I still don’t understand why they don’t do it, but it’s their property.

What is the relevance of old videos ?

Every XDC I see the same discussion about the video’s. I understand Xojo wants to make the video-project cost-effective, but don’t see the added value of single cam video’s . I experience a good webinar as more valuable.
@Paul Lefebvre does a recap of XDC 2019.

And per video would certainly not be $10, but more $99, so three make it worth to buy the whole collection.

Two bad assumptions Christian. Let’s do some more assumptions. What about I don’t value them as you do? What if I don’t care about the videos as important to me, but I just wished to help, the business and the users, at the same time? What if, besides being a developer, I’m an expert in marketing (including digital) that worked for years in the field?
In another thread we discussed about Udemy, have you experienced buying ENTIRE COURSES of the thousand subjects there? I do have access to dozens of bought courses, tutorials, etc from MANY SOURCES including Udemy, including 3 I bought and NEVER watched because lacking time to do so, but I wished to get that content at that time, and the price wasn’t significant to avoid doing it. We call it impulse sales. When you buy something, because you see a good offer by a not significant price, you just buy it for your collection of “to watch later”. We are talking about pricing things in the range of beers, sandwiches, pizzas, coffee; not Apple HomePods. The concept of In-App transactions to buy upgrades in software came from the same human behavior analysis, from a certain value up (hard to define) people just give up a sale not valuing an item as much the seller, but if you break the price in some modular way, given a good value for very good price, people will buy it and later many will buy the upgrades. You converted the zero sales to significant sales. We live in the world you give games away for free, completely usable, fun, etc; but if your game character wants to have a Ferrari, you must call the in-game inventory panel and buy him one for $0,99. This way some changed $1000 sales of $9,99 priced games to $100000 sales of $0,00 priced games, continuously, after the first sale, because more people will be impacted, and people return for more, not significant priced items, they don’t care to spend in a blink. Don’t get me started about MP3 and music world again.

That’s the current world, live it as it is, or lose opportunities without even noticing it.

Well, the FileMaker people put their sessions on YouTube. No charge.

Yes. They just want to sell FileMakers. Not “conference videos”.

Another thing to note is that you cant always judge a book by its cover. Several of the talks I watched were not what I expected - they were far more interesting. If I was just presented with a list of titles to choose from its quite possible I would miss out on some really interesting and useful topics.

Another thing to note is that you cant always judge a book by its cover.

So true. At least three sessions were not what I thought but helped me to see things in a different light. I’ve been stuck on a GUI issue and David Cox’s session ‘Creating a Picture Grid for Desktop and Web’ helped me to rethink how to go about it in another way! Thank you @David Cox !!!

you cant always judge a book by its cover. Several of the talks I watched were not what I expected - they were far more interesting

That’s easily fixed by a small synopsis following each title. Write it carefully, and voilà, the interest goes up ten fold.