In one instantiation of Xojo the line control is missing. Search yields no result. 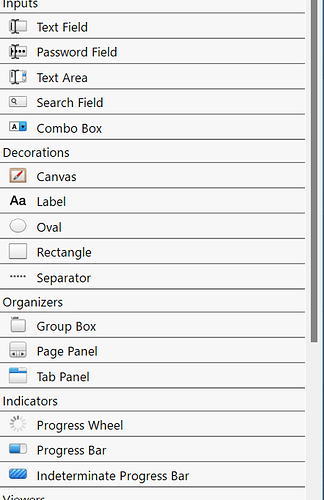 In another instantiation the line control is present. How is that possible?

In General I would suggest to configure this list to sort by Alphabet and without the group headers.

Fresh reinstall solves the problem, but when I open a specific project, line control is gone. Strange.

Has one project been converted to Desktop API 2 and there is no line available for API 2?

That is a possibility. But, 2021.3 is standard API2.0 right? So a fresh install has the line control, I load my project, the line control disappears and with a new project it does not reappear. It is gone forever…

Projects created in a version before R3 is still api 1 if you open it in R3 and have not converted anything.

On my R3 for windows with a new R3 project the Line is gone, but if I open a project created in an earlier version, the Line is there.

So Line is gone for Api 2

Aha, didn’t know that the line control was deprecated…

Strange decision… how to draw a colored line?

That is something I want to know too

Drop a canvas and draw a line there.

Maybe draw a rectangle with a height or width of 1…

Maybe… not tried it myself…

What do you mean?

I have some small containers I use for buttons. A selected button shows a colored line, but the buttons are small. I just ran a quick test and a rectangle with 1 pixel height works.

Sugar, yes, the line disappears after converting to Desktop API 2. I use some lines to align controls. Those changes are really annoying.

I stopped using lines because sometimes its display aas erratic.

I stopped using lines because sometimes its display aas erratic.

Yep. They, don’t know how, created a simple line control that sometimes showed as a straight line and sometimes as a crazy diagonal line, messing the design and never fixed it. It was a “random line control”

, so I was forced to removed it from the layout. I think that they preferred to drop it instead of fixing it, I don’t know why.

To be clear, it is removed from the library when the super of the Window is changed to DesktopWindow because the library now shows the new Desktop controls.