There is a variable

that raises an OutOfBounds Exception in my Code.
Specifically,

where pinFunc is an Integer.
Does either the Str command or the pistonFunctionText variable have anything that would cause an out of bounds exception?
Bug report below, with pinFunc visible. 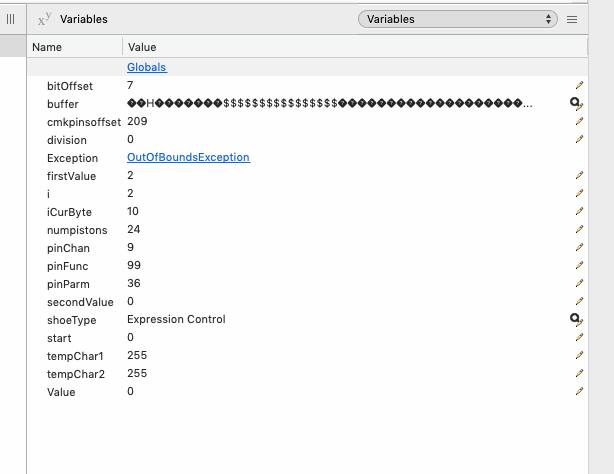 Aren’t you sure pistonFunctionText is an array and the index pinFunc is out of range?

There is a variable

This is an array of strings, not a simple variable. The array has NUMPISTONFUNCTIONS elements.

From your debug screenshot, we can see that numpistonfunctions = 24, so the array pistonFunctionText() can hold up to 24 elements.

From your debug screenshot, we can also see you are trying to reference element number pinFunc, where that value is 99. Since that is larger than the number of elements in array pistonFunctionText() – that is 99 is greater than 24 – you get an OutOfBoundsException.

I have no idea what you are trying to do or why pinFunc is 99 but NUMPISTONFUNCTIONS is 24. But that is the crux of your problem.

From your debug screenshot, we can see that numpistonfunctions = 24

It’s kind of strange (and most likely problematic) that you’re calling Str() on a string.

Mea culpa. That’s what I get for trying to shoot off a quick reply.

Somehow they looked like the same name. Thanks for the correction.

Though I still think with pinFunc = 99 and an OutOfBounds exception, the pinstonFunctionText() array must have fewer elements than that.

Thank you for your responses. Yes indeed the pistonFunctionText is an Array and is created as size 15, hence the Out of Bounds Exception since pinFunc is assigned to 99 in the same method.

For the record I did not write this code, just inherited it