I notice the main application icon for the IDE in linux doesn’t have the xojo icon, it has some system default (appears broken) icon. A fact of that icon is that I can’t right click it and add it to the favourites menu, or open a new window from the menu bar I just don’t get that option (like I do with chrome and other apps). I’m not sure if it’s a shortcoming of linux, the app IDE itself or something else.

BTW, the icon DOES appear correct when I search for it in the spotlight quickbar search tool. Just thought this was interesting.

How XOJO appears on my dock:

chrome tray icon to compare it against 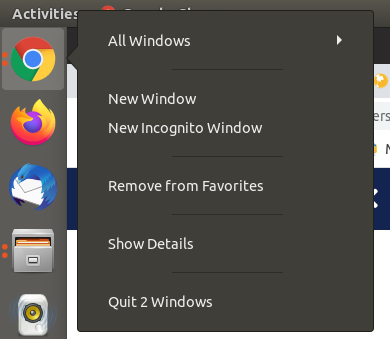 xojo icon appears for the app itself: 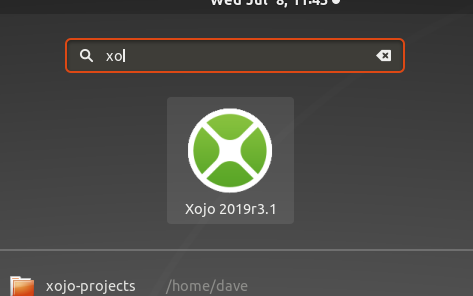 how did you install it ?
from the tgz ?

On my Ubuntu 18 system the Xojo icon appears in my installed software screen:

I marked Xojo 2019r3.1 as a favorite and it appears in my menu bar on the left side of my screen:

However, when I launch Xojo from that icon it doesn’t show the typical red dot to the left of the icon to indicate an instance of Xojo is running. Instead, a new icon appears at the bottom of my menu bar (as seen above) with the generic rectangle icon containing a “No” symbol (as described in the first post).

I suspect that the program launched by the Xojo icon isn’t the Xojo IDE but rather another process which then launches the IDE. Which might explain why the Xojo icon never shows a red dot since that program isn’t running after it launches the Xojo IDE. Instead the newly spawned Xojo IDE appears as a new/different process at the bottom of my menu bar.

I have learned to accept many of Xojo’s eccentricities when running under Linux and this is just one example of many.

The same happens to Xojo-built Linux Desktop Applications.
feedback://showreport?report_id=60293 60293 - Linux: Desktop Application Icon is not showing in Launcher-bar
See the workaround in Feedback - and that Xojo seems to have improved this for a future release.

It must be something wrong in your App.desktop file. Here are two of my Xojo apps in the Mint taskbar:

Here’s my .desktop file for that app:

Note that the icon won’t appear in your debug runs since there’s no .desktop file at that time.

Ah - the issue is a Ubuntu GNOME-Shell thing. Doesn’t do that on Cinnamon, XFCE, or MATE (at least here).

It must be something wrong in your App.desktop file.

You’re right - a .desktop file also helps to get an Icon shown.
Still - an application launched without a .desktop file can also show it’s AppIcon… but Xojo built apps don’t do that (yet), unless you’re doing that yourself using a Declare. That’s what feedback://showreport?report_id=60293 is about.
Which is about the same effect if you’re launching the Xojo IDE (downloaded as a .tgz) and don’t create an own .desktop file to launch the Xojo IDE.

I downloaded it directly from the xojo website, the downloads section: https://xojo.com/download/ and yes, used the TGZ Archive.

I am still using Ubuntu 18.04 (so that is gnome) purely because I’ve been procrastinating about what I want to install next (I really don’t know and so have been dragging my feet)

I will try the desktop file, thanks.

I can’t follow that feedback link (either of them), I get “Open xdg-open” and “https://forum.xojo.com wants to open this application.” and a “cancel” and “open xdg-open” button, but neither of them open or do anything. (I feat this is something wrong with my install, I get this across many websites and being somewhat dubious on intentions for other websites, I always go cancel. Here I did click open, but the tab just closes without opening anythingso this could help me fix two problems)

just thought I would add, the feedback link looks like: “feedback://showreport?report_id=60293”

I created another thread specifically for the feedback question: https://forum.xojo.com/61194-feedback-on-feedback