Please keep this on topic. The OP wanted to discuss the effect that rants and have whether other languages have the same.

Well I can only say again that that’s not in my nature at all and those that know me would LOL at the thought of me saying anything like that.

Does Geoff now get banned???

This reply doesn’t add anything to the discussion, please be civil and respectful so we don’t have to close a reasonable conversation.

Too early for jokes?

Every tool, every piece of software, every piece of hardware, every OS that I have used over the past 30+ years in the IT industry. Not one of them has been perfect - every single one has had users that were unhappy with the state of certain parts of the product or the direction been taken in the development of that product.

Nothing in the world of IT is ever perfect for everyone - it’s just impossible.

I’m new to Xojo - I see the same here but I’ve been super impressed with the capabilities of the product and believe it has a great future - the Web 2.0 development is a major leap forward. Is it perfect? No. Will it improve? For sure.

Xojo is not a large company - they don’t have a team of 200 engineers who can be assigned to a particular project. You want to see slow - go see FileMaker (part of Apple). The speed of development on that platform has been painfully slow over the past 5 years - now they are diversifying into other tool sets and again people are complaining.

No platform is perfect - this one is no different.

Geoff, I find it hard to believe you don’t remember calling me when I ranted in a Xojo Survey about my three issues where I mentioned issues with getting bugs fixed in a timely basis, getting Web 2.0 in a reasonable timeframe, and also getting new Web bugs fixed quickly. You called me as you were concerned that since I was “reasonable” you wanted to reach out. We talked and and you told me one my multi year old bugs would be fixed and I reiterated my three issues. Do you not remember that?

I’m sorry to hear that. We fix a LOT of bugs with every release but we can’t fix them all. There’s no large development tool that can. But we do try to work with users when they run into showstoppers.

You hear only now that Hal Gumbert and Tim Dietrich had left??? 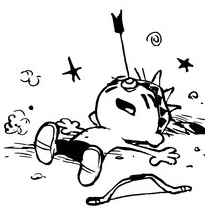 Explains why you think Bob is still around:

Bob Keeney still does Xojo development full-time so I’m not sure why you think he left.

Bob never ranted but made measured and well argued observations. But in the end he had no choice but to shut his Xojo consulting business and took on a job where he uses his Xojo skills (what else would one expect - him to suddenly earn a living doing brain surgery?). He is no longer active on the forums (though I’m sure like many ex users has a soft spot for Xojo and drops round to see how it is doing), he no longer promotes Xojo, he no longer recommends Xojo, his software has either been handed on (Tim Parnell has taken over ActiveRecord and Argen) or seems to be no longer in development (no API2 versions of his excellent BKeeney SHORTs and FORMATTED TEXT CONTROL … maybe Xojo should buy them and incorporate them? After all, the build-in reporting system is an embarrassment).

Thomas Tempelmann as far as I know has handed most of his active Xojo development to MBS and only uses Xojo for quick&dirty private stuff and updates to Arbed and FindAnyFile (though I don’t think he will update them to API2).

Sure, sometimes people leave for different reasons or come back - but the sheer VOLUME of EXPERIENCED users leaving is disconcerting.

And the number of new forum users per day is disconcerting too: 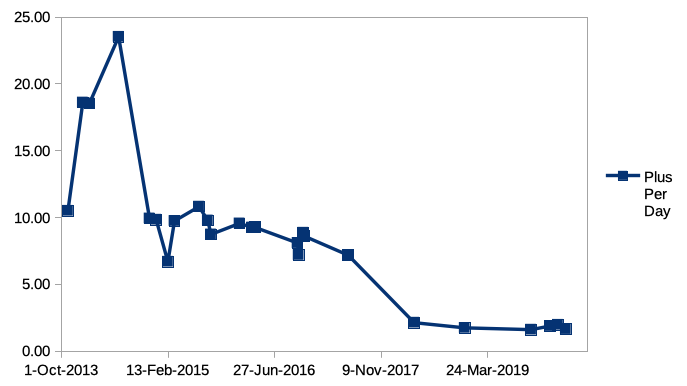 I would LOVE for Xojo to grow - that isn’t growth, that is “puddling along” as my grandmother used to say. And the exodus of experienced developers DOES have a knock-on effect.

And while Xojo has been around for over 20 years, the World has not stood still in those 20 years, and it isn’t a guarantee for being around for another 20 years. Other development systems have sprung up, non yet as easy to use or mature where cross-platform development is concerned, but they are catching up fast - and most of them are free.

So what do you expect people to do when their voices aren’t heard? When even someone as respected and engaged as Bob Keeney can’t make himself heard with measured and well-argued opinions?

Like Extinction Rebellion, Black Lives Matter, Fridays for Future - ranting is all that seems left to get at least SOME response. Even if it is usually a very disappointing locking of threads …

Is it perfect? No. Will it improve? For sure.

This cycle repeats itself over and over. Xojo announces “stuff”, it ships, folks rant about the bugs and when it’ll get fixed. Over and over.

This is the reason for rants. It’s to try to get Xojo to address the issues. Most of the time the response is silence. Other time with “be patient”, “soon”, etc.

I won’t be posting anymore. I thought it’d be helpful for Xojo to hear, but it’s like talking to a wall

@Geoff_Perlman my pulseware Software rolls out as xojo Source and the customers have to order Xojo to compile it. Behind the scenes are many small oem getting it delivered. Again: I love the concept and my only panic is that it will die. And sorry if I read that you think we will shoot in our knees I think you are not in the information status what customers are doing with Xojo. I can understand when you decide this but I have also to be sure that my way is correct. So if I calculate the risk at the end of the day I have to decide if Xojo is the right tool and Xojo inc. is the right partner. Cause if there will be a big strikeoff of functionality I have the problem that I need to react. As all of you know there will be a change in the Web. In this case there will never be a Chance to have a smart solution. Rewrite will be affordable. The point is that it has to be possible. Only that’s why I am ranting. I am not an enemy I am a user and my freelancers and customers to. If I have a way with Xojo I am happy.
One other thing is the ban of Norman for 1000 years. That shows me a bit of a censoring culture. Yes I beleave to the open discussion in all cases so I also beleave that you can suspend for a week or erase the user or you could suspend for 99 years what normally would be the method. But 1000 years is not helping. In my view there is the chance to come clothes together. Geoff please do not forget I was making xojo to a part of our drvellpment strategy cause I really beleave in it. That’s taking emotions into discussions cause there is not one week where I am confrontated with the problems.

One other thing is the ban of Norman for 1000 years.

Just to quickly cover this, the default for Discourse is to suspend a user for 1000 years when you select permanent ban. It’s not some jab at the user, just the way the forum software works.

I ask you all one question: are we wining anything with those harsh comments ? I am afraid that we ALL loose something.

Yes. It may be described as unprofessional by a certain Xojo MVP. However when the public discourse gets so great, Xojo (in the past) have relented.

API 2.0 continues to be a thorn in the side of many long-time developer, and it would have been worse had Xojo not caved and reverted the Event name changes.

Just to quickly cover this, the default for Discourse is to suspend a user for 1000 years when you select permanent ban. It’s not some jab at the user, just the way the forum software works.

I can’t answer that with any real authority, but I’d say it was partly a result of the forum conversion if that’s the case.

Not an attractive quality.

And probably what’s behind Norman’s ban too.

Ah okay that’s nice cause his other account was banned for 200 years so it looks a bit like adding from time to time. Sorry about it I could not know.

@Geoff_Perlman what I forgot: only thing was mouse positions in pressed events. Not less not more. And that you wrote will not be happened. A pressed event on canvas without this isn’t needed. Cause the mouse position is in many cases needed for. With all rest I can live even with rewriting code. But let us be able to. I do not need mousemove and I don’t want to need it. I also don’t want to make to mouth pressure cause of errors like ide under Linux slow and so on. When I wrote first time I thought that xojo is big player. Now I know that xojo is small company. Respect and at the same time: you may need a few more helping hands,

Best decision I made this year was not to wait on Web 2.0 for a major project but to press on with other tools. Because the little time I”ve spent on it and all I’m hearing leads be to conclude it’s basically a public beta.

Yes every platform has its issues, but we’re not talking about the usual bits & bobs, we’re talking about basic building blocks that have not been delivered.: iOS - dated, Android - absent and Web 2.0… ya well.

It’s a pity, there is an awful lot I like about this tool, but I just can’t depend on it going into a major project.

FindAnyFile (though I don’t think he will update them to API2).

AFAIK Thomas re-wrote FAF in a different to

Showing off with your fancy latin abbreviations…