Aaron Schacht, it is not because of shiny toys we want. I want to get off the pressure from Xojo Team cause it is not really nice to be under this pressure.
This is the foundation for my way: one stable Release to support on. Why there will not be this way? I do not know. There is the need for this way. Cause than everybody of the users knows, that there is the stable release.
For the new technology there can early birds be released. Without stopping to support the stable release. This would mean: we would have still supporting for errors in 2019r3.x. So everybody can work with this Version for long term without the need for changes as well.
When new technology is ready to show, there can always be an early bird release or a Beta Release when its going on to build it up as the new stable major release.
So everybody has a long term to get used to new technologies and can do his job. The new technologies will be previewed. That’s why I really pray for this release system.

That’s why I really pray for this release system.

I would have no problem with that if Web 2 was usable instead of half-baked.

I quickly played with Web 2.00. It could indeed get more love.

But as an old time user, I still remember new releases that were not that polished. The latest being iOS. It lumped as a poor unfinished thing for some two years, before finally, Xojo resumed development for it.

I was severe enough for the state of iOS.

But Web 2.00 is not the only game in town. Web 1.00 is reasonably stable enough for most business development, where a cute UI is not a requisite. So one does not have to port applications under Web 2.00 immediately.

As a developer myself, I know how demanding users can be. They always want bug fixes right away, and the product is never good enough for some. I also know that no matter the desire to please, there are contingencies that will slow development, no matter what.

Should Xojo have waited a bit more to introduce a more polished version of Web 2.00 ? Perhaps. But there were enough voices already clamoring for the release of 2020R1, which was expected for Q1. Clearly, Xojo was caught between the hammer and the rock plate. If they released later, users would be furious to have paid for licenses and not get the new releases (already happening). They chose to release a tad prematurely, and they are going to be chastised for an half baked Web 2.00.

If I was Xojo, I would tend to put resources in Web 2.00 (80% complete to be honest, and not half), rather than to go back to Web 1.00. Greg time is limited, and he cannot course both the new hare and the old bag…

The companies I know moved away from Android when they had to start taking privacy seriously. A hospital I know banned all Android devices from their network.

Well, I know none here. So if everybody here runs “pocket” banking systems without having their accounts wiped out, we certainly can do hospital systems. If a company really wants extra security, they can use extra secure Tablets, like Samsung, that uses their Knox hardware security layer and enterprise management systems.

Android is why Xojo Web is indispensable to the Xojo portfolio. That is likely to be so for quite some time. We have found Web 1 works on quite low end $60 devices sold at supermarkets even.

Companies can write software for iPads & iPhones and deploy them to their devices without the App store.

Not any company. You must be an “Approved paying company”. Not a small/medium company. If you have 99 employees, even paying, you are out. “Eligibility” starts at 100. 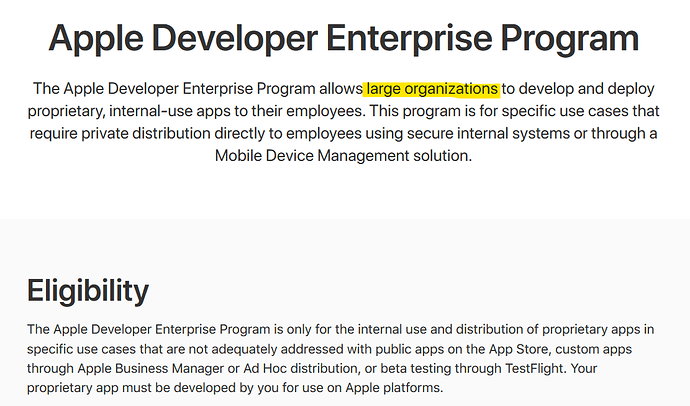 And as mentioned you need a MDM solution or something similar in place … that is often a price killer, even for large companies where paying for 100 developers doesn’t matter …

As far as I know, I can’t write an iPad app, create the binary, and send to companies that have contract with me and they can deploy MY apps to their devices. They need at least to sign the app as theirs (maybe AppWrapper can trick this part, but it’s an unusual procedure, not sure even if possible), because Apple’s “enterprise program for large companies” is an authorization for using the companies’ in-house apps only, not from outsiders.

There are lots of Web 1 apps with plenty of life in them yet which cannot migrate to Web2. So by all means rush out some patches for Web 2 To be workable with new projects. However there needs to be conversion tools and greater Web 2 maturity before many Web 1 projects can be successfully migrated.

Their walled garden, bureaucratic and complex interconnected and Apple dependent model is better than nothing, thanks.

the companies need a mobile device management tool in place

As Mark pointed out, there’s another model too besides the Enterprise. The “Custom Business”, but both are related, with your app passing by the Apple bureaucratic, complex, paid, inspected and approved app deployment tracking system as you pointed out. But at least it is manageable if you find a market in such ecosystem.

A market in such ecosystem would be most large organisations who will not allow the free for all that is Android anywhere near their networks.

Anyway it’s pretty clear that you are anti iOS so I’ll leave this discussion now.

A market in such ecosystem would be most large organisations who will not allow the free for all that is Android anywhere near their networks.

I don’t know, maybe, but such claim could only be possibly valid in US, UK, Canada, and Australia.

Anyway it’s pretty clear that you are anti iOS

Not true. I love the OS. I just don’t like the ecosystem.

The point with Apples policy is that they do not allow third party software except within a small business program up to 100 users and for payed channels. There is no other way, the user cannot decide to install, Apple decides this. As a long time Linux developer I love being in an open world so iOS for me is a pain.
But there would be a nice way to bring up iOS development to all computers witch would realize open Plattform development. I don’t work with Mac OS and also not under Linux. So developing with a build server would be a nice solution cause xojo could provide on this way iOS development under Linux. B4i shows the way.

Could an admin simply lock this thread ? It has derailed beyond redeem, and is no longer on topic.

Could an admin simply lock this thread ?

where the bell is you can also mute it.

Both can link to specific posts in this topic if they wish to refer back. I’d like to remind everyone that the forum guidelines do request that participants not derail discussions: