Web 2.0 : is a vertical webtoolbar possible (or planned)?

or do we have to use webcontainers to mimic a vertical navbar ?
thanks.

also how to set a small logo at the top left ?
when I use an imageview, it gets recovered by the toolbar at runtime.

I think that the idea for the Toolbar is to automatically adjust to the device width, so I don’t think it will be a vertical option available. Maybe a different control for that.

For now the Toolbar is fixed at the top of the screen, I guess that is the only way it will work. You will need to put your small logo on the Toolbar.

Edit: when I said ‘put your small logo on the Toolbar’ I tried to say this:

Put the logo on the toolbar as a Title. There’s also an icon for the toolbar.

Put the logo on the toolbar as a Title. There’s also an icon for the toolbar.

We’ve gotten a couple of verbal requests for a vertical toolbar. If you want to see such a control, put it in Feedback!

the icon is too small.
to put it in the title, you mean I store the SVG format of the picture I want in the title property of the toolbar ?

it could be replaced with a TabPanel if you could put the labels on the left side ?

Ah, your logo isn’t square then. Usually when I think of icons, I immediately think of an app icon. 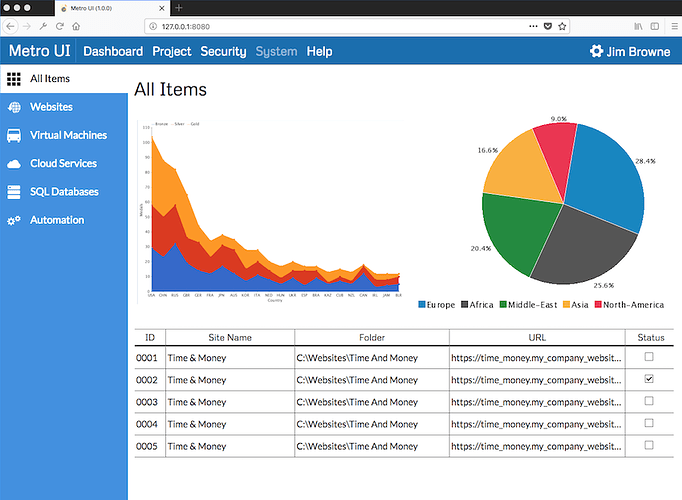 It’s on Github, if you want to have a look.

@James_Dooley: I’ve already seen this huge project of yours.
many thanks for giving it to the community !
I would like to start from scratch with web 2.0
in your project, the underground classes are quite huge also.

When there is a stable production ready version of 2.0 available, I’ll look at doing an upgrade put not until them.

Creating a WebContainer with the FlexLayout is probably the easiest way to create a Vertical Toolbar Currently. And then you can do things the current toolbar doesn’t support like having nested WebContainers in the toolbar as controls

It actually already does this. It turns into a hamburger menu

You know this already exists…automatically.

does any of you have an example project for this ?

I used a rectangle logo and it automatically scaled but at 30 pixels wide its just too small to be readable. I haven’t successfully been able to figure out how to make the Toolbar taller in the Bootstrap CSS or the Iconwidth/height bigger than 30 pixels. The few CSS editors that I have found are not very good at saving a usable file. I’m starting with https://bootswatch.com/spacelab/ and many of the editors spit out garbage .min.css that doesn’t run correctly in Xojo. I played with this stuff a large part of the weekend and the only positive results I’ve gotten is from manually editing, but stuff I change often doesn’t seem to change the resulting behavior.