I’ve released an update to VersionTracker, my free app that builds change logs for developers. Designed to fit any workflow, language, or platform, VersionTracker can simplify your release process. 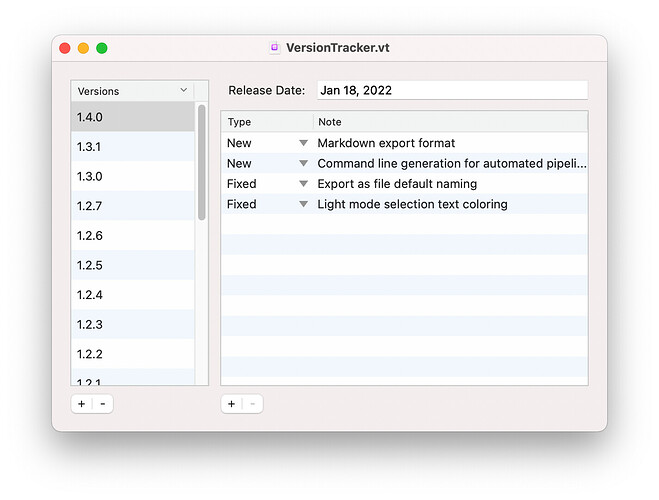 Additionally, this version also includes the ability to generate export formats by command line for automated pipelines. The documentation for how to use this can be found under the Help menu.

Might want to bump up that copyright year, in the About window

By two years, no?

Thanks for pointing that out. I’ve got it fixed in the next update

Versiontracker 1.4.0 on Monterey (12.1 and 12.2) shows a dialog (when saving) that it will not work in future versions of macOS and needs to be updated. 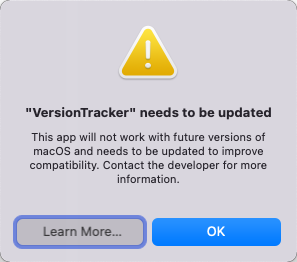 Clicking in the “Learn more” button opens a website with infos about python 2. Apple did announce that is will remove phyton 2 from macOS (Apple Finally Removing Python 2 in macOS 12.3 - MacRumors).

lol just I added a python formatting script because Xojo broke JSON Item pretty print.
Any update on when that will be fixed @Greg_O_Lone so I can pull that hack?

Thanks for the heads up, I’ve been avoiding Apple’s newest release because I’ve heard of so many issues. I do think I have a backup plan if Xojo is still going to ignore the issue.

(this applies to JSONItem.Compact = false as well and doesn’t appear to be related to a string variable. hopefully they don’t stick their head in the sand about it any longer since hacks and workarounds aren’t going to cut it)

Thanks for the heads up, I’ve been avoiding Apple’s newest release because I’ve heard of so many issues. I do think I have a backup plan if Xojo is still going to ignore the issue.

Its only version 2 of python that will be removed from macOS 12.3, as it was deprecrated with Catalina (Apple Developer Documentation - section " Scripting Language Runtimes"), maybe you can use python 3 instead, until the JSONitem problem gets fixed:

It was a quick and dirty shell hack to use python to format the JSON. Shell.Execute("cat " + fTemp.ShellPath + " | python -m json.tool")

I’ve replaced like 25 lines of workaround using Einhugr. This python warning will be gone in the next build.

This python warning will be gone in the next build.

Thanks!
VersionTracker is one of those nice, little tools I use every day. Glad to hear it will work on the next macOS update…

There’s a JSON parser built right into the macOS.
You’ll need to convert your dictionary to a NSDictionary, but then you can utilize the Apple JSON parser, which may or (since Apple PJ) may not improve the JSON output.

JSON Bug is reported as fixed for a future release: GenerateJSON `expanded` property broken? - #10 by Dana_Brown