String vs text, what's it's gonna be ? doc is confusing

wanted to use mid but beetween API 1-2 and all, got confused, doc is confusing too 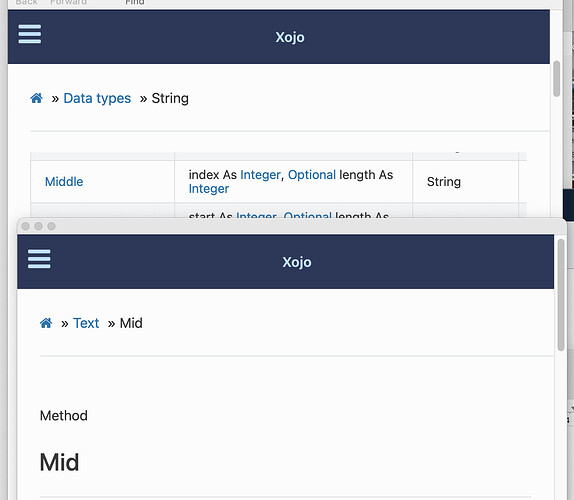 Text is a data type that is used to store and manipulate text strings in a platform-independent way. This means that the same text string can be used and displayed correctly on both Windows and macOS, for example, regardless of the underlying character encoding used by the operating system. Text strings are stored in memory as a sequence of Unicode characters, which are a standardized encoding of text characters that can represent most written languages in the world.

It’s also worth noting that Xojo uses Text for the text fields and text areas in the GUI and String for the variables in your code.

I dunno what GPT is, but you should forget about the Text type altogether; it is now deprecated. Just use String, and the API2 methods such as Middle. I removed all Text from my app some years ago.

The Text type was deprecated in the past; and later, due to community claims, they changed it to “deemphasized use”. String absorbed all the unique Text type capabilities. So just use the String type.

Text seems/was a special class for ios development in past?

Xojo documentation could be better for sure.

Mid is a method which get the string as input and a string as output.

Mid is “deemphasized” too, just use Middle.

but the api is confusing itself, we write textfield.TEXT not textfield.STRING

so textfield.TEXT produce a string; kinda funny, why shouldn’t we be writing textfield.STRING ?

A TextField holds a text content (letters, words, etc), that text content internally is a String. Maybe at some point some of those properties returned a Text type (not sure) before the “reorganization” around String. I do remember some classes containing Class.ToText() in the past that after the deemphasizing of the Text type gained a ToString() too.The idea is to kill the Text type in the future.

so textfield.TEXT produce a string; kinda funny, why shouldn’t we be writing textfield.STRING ?

No. TextField1.Text returns the TextField1 contents…

Feel free to create an issue against the documentation if you believe it is unclear.

And as said, TextField contents are returned as a String type content.

Assigning a string to the Text property replaces the entire contents of the control. The font, size, and color are uniform and match the values last set with the FontName, FontSize, and TextColor properties, or if these haven’t been used, the settings in the IDE.

Please note that the implementation of the DesktopTextField and DesktopTextArea controls is platform dependent. Do not expect that the text you assign is the same as the text you receive from this property. For example on Mac your text is converted to UTF-8 internally. On Windows all text after a null character (which means chr(0) and not “0”) is ignored. End of line characters can change to their platform specific counterpart. Special characters with Asc values below 32 may be ignored or removed.

Clear (remove) any text that is displayed in the TextArea:

some methods was more robust, the new can throw an exception.

When? When the dev commits an error? Are you trying to say the API1 was more lenient and accepted some silent errors and API2 is more strict and makes us more careful?

That would be the other way around, API2 would be more robust if it does not accept quietly something potentially harmful.

we can use mid and middle ?

string.middle is Zero based, mid is 1 based. Look carefully at each change from mid to middle.

just a example i have in mind for
0 = Val(“A5”)
0 = Val(“”)
“World” = Mid(“Hello World”,7,100)
new framework raise for everything an error which is not handy for elementar methods and is difficult to test all situations.

OT
thanks rick,
i can not reproduce it anymore.