Well, it was fine for you about 12 weeks ago.

Anyone else tired of this?

I guess its 'delete half the contents of my machine, spend 12 hours downloading a new Xcode, then spend a day trying to get Xojo to talk to it’ again.

You may need to go to a newer version, which uses a newer SDK.
Or discuss with Apple to let you use older SDK a bit longer.

You will need to use Xojo 2021r3 or a newer version to release iOS apps.
Unless the App Store team makes an exception for you, which is difficult to get if you aren’t a big company

Or discuss with Apple to let you use older SDK a bit longer.

Sadly, I cannot even beg, threaten or bribe.
Transporter refuses to even upload it for review.

(Actually, after reading some of the reviews I don’t know why I am even bothering.
The things people expect the ‘cup of coffee priced’ app to be capable of , are way beyond the capabilities of Xojo and I.)

I really suggest trying your app in Xojo 2021r3. There were many fixes for iOS in that release.

It is the version I still use for my iOS project as there is a problem that only seems to affect me in 2022r1.

I really suggest trying your app in Xojo 2021r3. There were many fixes for iOS in that release.

It would probably compile.
That’s not the problem - I may do it anyway, but there’s nothing Xojo related that needs to be fixed.
And 2021R3 / 2022 don’t add any new features for iOS that I actually need - (plugins and API calls had to take care of some of those)

I don’t have any actual bugs that need to be addressed, so like many years I usually stick with the Xojo & XCode builds I know work, rather than risk introducing new issues that were not of my own making.

My issue is only that Apple won’t take a minor update to the app because of a new (to me, arbitrary) rule.
To appease that rule, I will probably need to waste days updating everything and risking introducing potential new issues.

there is a problem that only seems to affect me in 2022r1.

Exactly.
I’m seriously considering abandoning iOS. The returns don’t cover the cost of the Xojo licence, let alone the hardware and my time.
But I’ve sent a message to Apple.
You never know…

The point is that Xojo 2021r3 builds apps using the iOS 15 SDK, and that’s what Apple are asking for.

Ah. I didn’t notice that. I’ll give it a whirl.

What I did just notice:

My issue is only that Apple won’t take a minor update to the app because of a new (to me, arbitrary) rule.

This is definitely not a new rule. Apple announces every year that App Store submissions must be done with the latest iOS SDK a few months in advance.

there is a problem that only seems to affect me in 2022r1.

Just to be clear, this is an edge case, that only affects me at the moment. I have discussed the issue with the engineers and it is already fixed for next release.

Which is both amusing and annoying because I would LOVE to support iCloud, but cannot achieve it.
No idea why it thinks I do at this point. 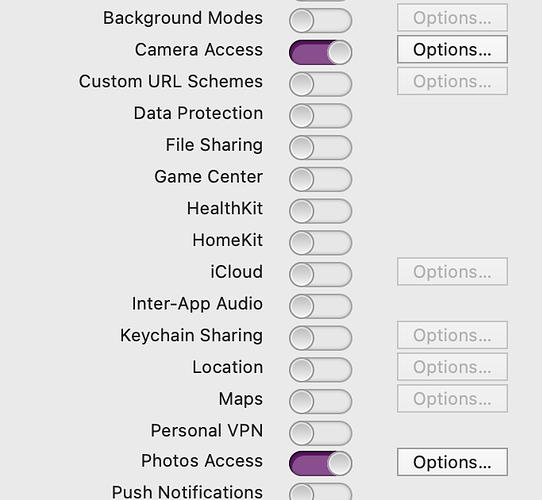 Just to be clear here, this has nothing directly to do with Xojo – it is Apple who insists that App Store submissions be compiled with a specific minimum iOS SDK version. And that version is a moving target, updated (IMHO too) regularly.

If / when Apple is forced to allow alternative app stores or (general) side loading of apps, this may become less of an issue – if willing to forgo the Apple App Store.

It is unfortunate that Apple does not allow minor revisions/bug fixes to be submitted using the same SDK as an existing app. But they live by the Golden Rule: “He who has the gold, makes the rules.”

Blank project works fine, so thank you @Jeremie_L and @Gavin_Smith for suggesting 2021R3
I honestly didnt imagine that R1 and R3 would use a different SDK

There must be something in one of these big libraries I dragged in that refers to iCloud, so I’ll do some pruning and see what happens.

iOS SDKs change in the fall with the new iOS releases from Apple.

The good news is that I tracked down one line of code in a library which I wasn’t using, which caused the error message in 2021R3 but not 2021R1
So I can compile, and am now hopeful of being able to do the update this time around: thanks again both.

"I understand from your email, that you need to make a small update on your app. However, due to updates within the Apple Developer Program you need to use the latest version of Xcode to complete this.
… you can contact our AppleCare team for support on storage on your device if you need assistance with creating space on your Mac. "

I would guess that they made the assumption that you didn’t upgrade xcode because you were running out of disk space.