I’m having to run the Xojo IDE in Windows 10 within Parallels on my mac, because of the issues I’m having over here.

It’s really sluggish when doing things like dragging UI elements around, resizing windows, or navigating the code editor via keyboard. I have things like key refresh rate set to short/fast within the Windows Keyboard Control Panel, but there’s a real lag when holding, say, the arrow key down and expecting to zip up or down a couple dozen lines of code.

With Xojo running on a native Windows PC, I don’t see any of this sluggishness, so it’s something to do with the virtual environment, I think. The Mac is plenty fast (10 core i9 @ 3.6GHz w/64GB RAM and a Radeon Pro 5500 XT 8 GB GPU), running Big Sur.

It’s been almost 15 years since I last used Parallels. Is this performance to be expected or are there some performance tweaks I can do to make Xojo faster? Other apps running in Parallels (like Chrome, for example) don’t seem to be this slow.

That’s interesting. I have an 8-core 2.3GHz i9 and my parallels Windows 10/11 configs are set up with 6 processors and 12 GB RAM and I hardly have any sluggishness at all.

That said, I try not to have anything processor intensive running at the same time.

I have it set to use 10 cores (it’s on Auto, so this is what it chose), 16GB RAM, and the base preset I’m using is the one for software development.

At the moment, the only Mac apps running are Chrome, Mail, Slack, BBEdit, Terminal, iMessage (then within Parallels, just Win10 and Xojo 2021r2.1.

If I drag-resize the main window for a Xojo project, there is no live refresh while I do it, and when I drag and release the mouse it takes about half a second before it redraws. When I do the same in Chrome within Windows on Parallels, it’s live (though it stutters a little).

If I copy/paste a long document into Notepad, and then use the arrows to scroll it, it’s as fast as it is on the mac - takes about 18 seconds to scroll from the end to the beginning, just holding the Up arrow key.

The same text pasted into a Xojo code editor in parallels took 94 seconds to scroll up (I timed it with a stopwatch, so give or take a bit).

Hi Perry, just a thought have you installed the latest version of the Parallels extensions into the VM even if you’ve installed them for a previous version of Parallels before, without them the VM can perform really badly. I’d reinstall them just as a test anyway…. Also make sure you enable video acceleration in the VM settings…

This is a fresh install of Parallels/Windows, on a newish machine. I’ve never had it running on this mac before. The last time was ages ago, with Windows XP on a completely different machine.

Are you referring to Parallels Toolbox? I did install that for mac. I did not install it for Windows, because of this note in the installation window: 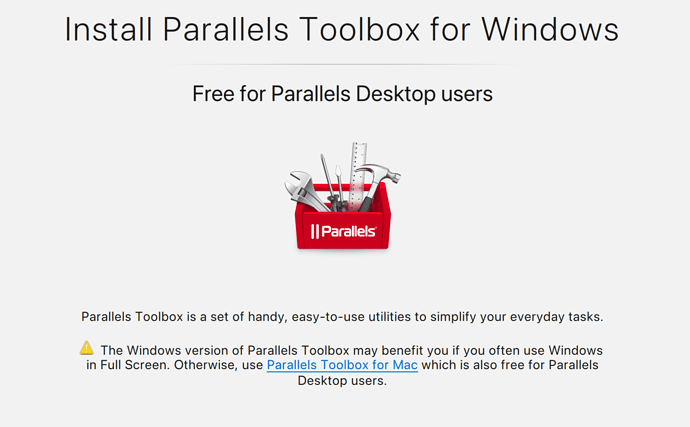 I believe they are called Parallels tools in Parallels, I not too sure I use Virtual Box or VMWare.

Have a look at this article : KB Parallels: Improve virtual machine performance on Mac

Hmm. I’ll fiddle with the CPU settings tomorrow. Maybe less is more in this case. Though there doesn’t seem to be any adverse effect of running the VM on the mac side of things, with it set to 10 (which I assume is half my CPUs, if you account for hyperthreading).

Only other thing I can think of that we haven’t discussed is the type of drive the VM is on. All of my VMs are stored on SSD drives and it makes a huge difference in performance of the whole VM.

True, the parallels article I listed discusses that, though regardless of drive type, they recommend never running them on an external, usb drive. I use an internal fusion drive…

though regardless of drive type, they recommend never running them on an external, usb drive

In my experience, an external SSD over thunderbolt is superior to an internal hybrid drive.

Based on your specs, I’m assuming you have an iMac or Mac Pro. If so, I suggest replacing your drive. You’ll see a major speed boost across the entire OS.

Hi Greg, thunderbolt is far superior in bandwidth to usb in every respect, which is why the article specifically mentioned USB.

My iMac uses a seperate 256gb ssd as a cache for the larger drive, in a fusion drive configuration. All reads and writes are made to the ssd before being offloaded to the other drive in the background. My iMac boots as quickly as my Retina MacBook Pro with a 700gb ssd.

My windows and Linux vm’s boot in under 20 seconds so performance is pretty good.

Thanks for the suggestions though…

My mac has a 1TB NVME drive so that’s not the issue - Parallels, Windows, Xojo are all running off the internal SSD. Again - the performance of a text scroll in Notepad on the exact same machine is significantly faster. I just tried another one, and what takes 9 seconds in Notepad is 45 seconds in Xojo’s code editor. It’s not that Windows itself is running slowly, it’s Xojo within windows, on Parallels.

I did a test this morning to drop the number of CPUs to 4 (8) and there’s no difference. I also played with some of the advanced settings to see if the Parallels Hypervisor is better than the Apple one, Apple being the default, but there’s really no appreciable difference there either.

It’s not a memory issue either - in Windows Task Manager, only 16% of the 16GB of RAM I’ve allocated to it is being used. And watching the CPU usage in the task manager, I never get above about 8% CPU usage when moving around in Xojo.

I use VMware Fusion, not Parallels, and don’t have any performance issues with Windows 10 VMs. However, Windows 11 can be pretty slow and one thing I did to speed it up was to turn off Retina/HiDPI scaling for the VM. May be worth a try with Parallels as well.

one thing I did to speed it up was to turn off Retina/HiDPI scaling for the VM. Maybe worth a try with Parallels as well.

That did it. Thanks!

For years, I’ve always paid for both Parallels and Fusion, and I tend to ping-pong between the two as it typically seems one is better than the other on any given year. In particular, the quality fo video drivers matters to me. If turning off Retina/HIDPI fixes the problem, it could be that you actually don’t have Parallels tools (whichi includes the simulated video card drivers) installed or configured properly?

it could be that you actually don’t have Parallels tools (whichi includes the simulated video card drivers) installed or configured properly?

I am looking through the Parallels Toolbox window: 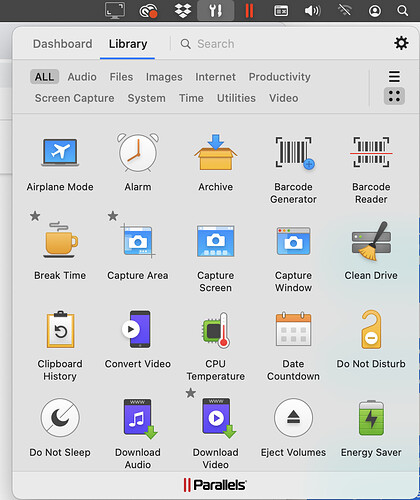 And don’t see anything about simulated drivers. Is this what you’re referring to, or something else?

I am looking through the Parallels Toolbox window:

I don’t think you can see it there. Parallels Tools has little to do with the Toolbox.

Maybe try if you can install the Tools like described in this Paralells KB Doc.: KB Parallels: Install Parallels Tools

Hmm. Well, they are installed, but I reinstalled and restarted the VM. 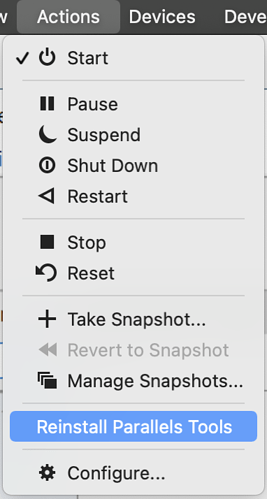 …But no difference in performance. If it’s set to “Best For Retina Display” or “Best for external displays” it’s a slug. If it’s Scaled, it’s pretty zippy.

I can find no other configuration options beyond these selections. The 2.3k screen I’m getting with Scaled is fine for my purposes though, so it’s not the end of the world.

SSD with the USB HUB: max is around 40MBPS
SSD direct connect: around 480MBPS…

Test with HD reflect the same numbers (around): 40MBPS with the USB HUB while 120MBPS directly.

I used “Blackmagic Disk Speed Test” for the speed tests.