Xojo 2020r2 can build applications for Apple Silicon and it can build universal applications, too. We updated MBS Plugins and include Apple Silicon support in version 20.5. You can try it, but we’ll soon have a new beta for the next version as we find issues while more people try building for those new Macs with M1 processor.

All MBS Plugins in 20.5 (and future versions) include an Apple Silicon version. Not all libraries are available yet for Apple Silicon and most functions have not been tested although since it’s basically the same code on the same OS with a compiler change, we expect everything to just works.

The iOS target in Xojo got a major improvement with moving to API 2.0, which includes using more of the older Xojo framework parts like String and Variant for iOS. Auto and Text are deprecated and fade away. Since those data types were added, Xojo Inc. ported the plugin SDK to iOS. This allows us to provide you our plugins with iOS counterparts. So far this plugins build for iOS and are included with 20.5 release:

These plugins build, but are not shipping with iOS as we currently don’t see use for them on iOS:

And the following plugins do not compile for iOS and we may look into them later:

If you like, try the plugins and let us know what you think and where you have trouble.

Barcode detection is not working in iOS.
I tried all samples, converted to iOS from the MobileImagePicker to the sample code.

All results are “no code found”

Maybe you have an iOS working sample?

Can you email me your test project and picture?

so I know which class you use and what barcode.

It’s send, tested on real device to not work. 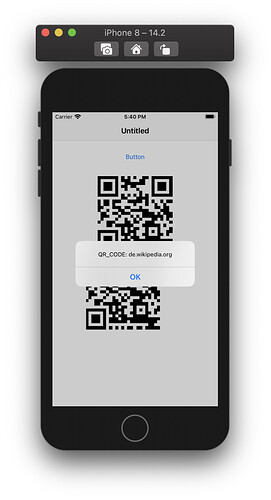 Next week, we’ll have a new pr.

The plugins I have may already have a few bug fixes.
So try next week with pr1 of next version.

@DerkJ @Christian_Schmitz Can either of you confirm if the barcode plugin now works on iOS?

I’ve not tried plugins later than 20.5
It seems 20.5 is not detecting it well we rather wanna use avfoundation and camera bardcode detection on iOS hope @Christian_Schmitz will have it soon.

it builds, but I have not yet tried it myself!

Yes. We map UIWindow to NSWindow and use our NSWindowMBS class for them.

Hi @Christian_Schmitz can you provide a sample for live barcode scanning? without having to take a picture first?

I worked on such an example and it’s included in the 21.0 release. But may not be finished. Feel free to try it.

It wasnt’t working anymore and when rotating i’m unable to get the correct rotation for the camera view.

Your example crashes on the AutoResizingMask in the configure method.