Made it onto the MAS!...and a question

Hello everyone. I finally got through the MAS approval thicket and my latest app ARC-X is now on the Mac App Store. A sincere “Thank you” to all of you for your kindness and patient help. I’m a film editor so ARC-X is a utility for editors. If you’d like to have a look at how it works you can check the website and watch some of the videos. Special thanks to Sam Rowland, Christian Schmitz, Beatrix Willius, Michael Diehr, Tim Parnell, Michael Bujardet, and the rest of contributors to the macOS corner of the forum. Each of you helped in some way and I am most appreciative.

Now, another question. I would like to offer a “try before you buy” option on the MAS but don’t know how. I saw the big announcement Apple made regarding its availability, but I haven’t seen a demonstration of how to implement it in Xojo. I currently use Christian’s plugins for the basic MAS interaction in ARC-X. Has anyone successfully implemented “try before you buy” on the MAS?

Many thanks, as always.

There is a 14-Day trail In App Purchase option, I don’t know where it is off the top of my head, so you’ll need to Google it.

Actually the “try before you buy” is only available for in-app subscriptions.

To access this feature open appstoreconnect, go to your app, then Features > In-App Purchases > (+) button

As soon as you define the subscription duration, you can then set up an introductory offer (aka try before you buy) 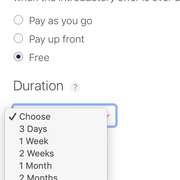 To be honest, unless you set this up, I don’t see how your app can make any downloads with at a $75 price tag.
Furthermore, paid apps make 95% less downloads than freemium apps (free to download, pay to activate all features)

EDIT: feel free to PM me if you want advice on ASO (App Store optimization)

So you are saying… if I had an app that I wanted to sell for $X
that I would technically make MORE $$ if I crippled it, gave it away, and charged $X to uncripple it (ie. unlock features).

[quote=473607:@Dave S]So you are saying… if I had an app that I wanted to sell for $X
that I would technically make MORE $$ if I crippled it, gave it away, and charged $X to uncripple it (ie. unlock features).

I was looking at doing the opposite… touting it as “Has NO IAP!”, “Ad free”, “Buy and have fun”
both because it is easier , and figured people were tired of crappy ads anyways… (and I’m talking $2.99 not $75.00)[/quote]
From the developer’s perspective this seems better of course. But it only works if you have a marketing team that will promote your app in some way or another
From the buyer’s perspective seeing a promotional video and some screenshots aren’t enough, they need to test the product first, especially when the price is high. ARC-X is priced $75, which I assume is a fair price for what it does.
I don’t know if Anthony has time or money to put into marketing this app. If he doesn’t, the best way to make money is:

In both cases, translating the app (or just the App Store product page) to Chinese Simplified & Traditional, German, French and Russian alongside applying basic ASO techniques would greatly increase the visibility of the product.

Apple refused to accept the model that’s existed for software since the dark ages, whereby a user pays once for that version, and then is entitled to an discount update when the next version is released.

According to my discussion with an Apple rep last summer, IAP is the way to offer this. When I pressed for more details, I was pointed to documentation (which didn’t help explain) but gave me the impression that Subscriptions is the only way forward.

I experimented with a handful of designs on trying to replicate the traditional model using IAP, but ran into serious complications every which way I turned. Shipping a 2.0 as a separate product is what landed us in hot water, and ultimately cost us lost business for the last 5 months on an 18-month development time frame.

Through IAP there are two options I can see.

Back in 2016; when I wrote my long letter to Tim Cook, I was asking for method to replicate the traditional/existing software mechanism of pay for v1.0, pay an upgrade free for v2.0. Like everything else in my letter, this point was ignored.

[quote=473631:@Thomas Osthege]@Anthony:
Great movie on your website. Very informative.[/quote]
Weird that I can’t play the movie with Chrome, I had to open the website in Safari for it to play.