As using the normal serial device can’t filter out based on vid/pid I try now with MacUSBMBS from the MBS USB plugin.

The device I have is a so called BattLab-One which has an FTDI USB2UART chip on board.

For example a simple ‘j’ sent down to it returns back following hex data when using Python3 serial module:

In Xojo I use this for sending which works fine as I can see that it for example can switch voltage on the output:

But when reading back with:

Only in rare cases I get:

Still wondering why it always prepends 0x0160 for every ReadRaw command though it doesn’t return anything:

The device doesn’t respond at all when sending “h” (power supply on).

Seems FTDI devices are sending back their PID as the first two bytes in ReadRaw…regardless if anything was sent or not.

Well, you are basically running a raw connection and get the serial protocol.
So when you send our plugin doesn’t package it for you and when you receive, we don’t unpack it.
You may lookup the protocol details and you may find what is the meaning of the packages.

Some byte is probably the start of the package, some the end. Somewhere is the length of data and in the middle should be the data.

Already switching to libUSB as it supports more than one device with same VID/PID/Name (o; 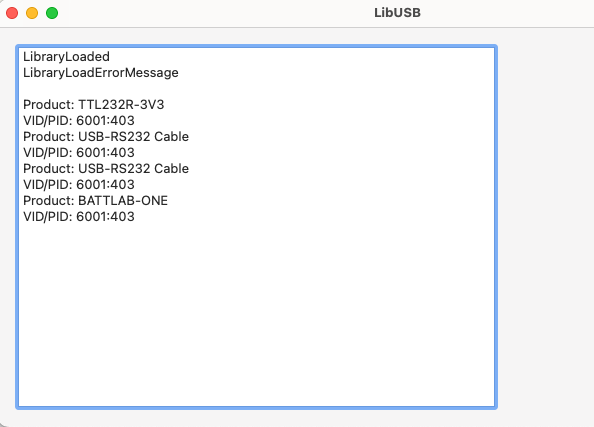 Just have to figure out how I could package it with universal libusb-1.0.0.dylib…

You can usually just include the dylib in the frameworks folder of your app.

BTW: Are there any licensing issues with bundling libusb?

There are still something like 100 million Intel Macs out there with your customers.

libusb is LGPL, so you can include a dylib within the app and load it at runtime.

You checked our libraries folder?

Oh, I See. That one is not yet ported to Apple Silicon.

Maybe you can just get one via homebrew pre-built and copy it.

So I need separate builds for Intel and M1?

Or is there a way to check during runtime on which silicon it runs?

So I need separate builds for Intel and M1?

No, you can lipo them together.