Is there a way to stop temporarily the mouse wheel scrolling when you give it a push. Normally, that’s a good feature, for example when quick scrolling through many pages in a text, but one of my cases it’s really annoying.

Depending on the control, return True from the MouseWheel event.

Yes I got Return True on Mouse Wheel. It works on an ordinary mouse having the typical “tractor wheel” for scrolling, but there you can’t set in motion like on a track pad or phone. In almost every aspect I prefer the Magic Mouse, but in this particular case it’s really annoying.

I believe the keyword you are looking for is “inertia” (this is when the scroll gesture starts an object scrolling, and it keeps scrolling as if it has momentum). There are some other behaviors such as the “rubber band” or “bounceback” effects which happen when you hit the end of the scroll limit. Which ones are you trying to disable?

Me, I’d like to disable the rubber-banding and the bounceback. Very irritating when one’s app contains an HTMLViewer.

Specifically, I use the scroll wheel for zooming in and out over a fairly complex model. This means that the model has to be updated, which of course take a little time, say 0.15 to 0.30 seconds for a full redraw and 0.1 to 0.15 seconds in “simplified mode” used when working dynamically. With a standard mouse wheel, it’s not really a problem, but with Apple’s Magic Mouse, it often tends to live a life of it’s own, going into a frantic for several seconds where it goes into an uncontrolled spin. I have tried all sorts of timers to block it, without much success. 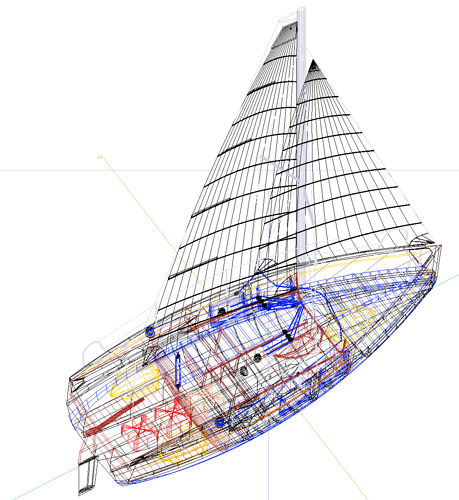 In other words, while the user is still scrolling, you never update the display, always waiting until the scroll events have stopped, before allowing the timer to trigger the refresh.

Finding a way to turn off inertia might be a better solution? Not sure.

What 3D display technology are you using?

Here’s an example (which uses WebGL) : three.js examples and on my mac, it renders perfectly at 60fps, even when using the zoom in / zoom out behaviors on my Magic Mouse.

TLDR: If you can get your refresh code running in under 16msec, then you shouldn’t have any issues with scroll mouse events.

I will experiment a bit with that

The problem lies in the modeling unit, which does not use OpenGL, as its main purpose is to model fairly complex parametric NURBS based shapes, and where the task usually consist of hundreds or even thousands of micro adjustments. The example consist of around 325 objects controlled by about 13000 control points.

Thanks, that helps explain the situation. If I were you, I would do this:

the task usually consist of hundreds or even thousands of micro adjustments. The example consist of around 325 objects controlled by about 13000 control points.

Are you using compiler #pragmas judiciously?
In xojo, tight loops doing small changes can be very inefficient, since each loop will check for Thread yielding, nil objects, etc.

I have worked very hard optimizing the code, and generally speaking, it actually feels quite snappy. I have accepted that it will never be the fastest program, as I have favored shape control and maneuverability over speed. It uses a dynamic method for calculating the shape of the model at any given time in the fly, which costs in speed. In reality though, it does what it’s supposed to do way quicker than any similar program on the market doing what the program does as it constantly delivers feedback to the user.

Of course, I always try to improve the speed. One lead I have is that the Windows version on a fairly humble I3 clone seems to be faster than on an M1 Macbook. The test model redrawing times are 0.16 vs 0.20 on average in favor of the Windows machine. For some reason the Mac is slightly quicker in Simplified mode (used when rotating the model) 0.07 vs 0.055 seconds. It suggests that math grinding may be a bit slower on the Mac, whereas the drawing parts works better (as lines, it’s about 100 000 objects to draw).

Anyway, my problem is fairly restricted to this zoom thing, and explicitly using this particular mouse. An ordinary mouse is not really a problem. I will investigate your leads. Thanks for your help.