There is another Thread about Xojo users having issues with libcrypto.
It boils down to the fact that Apple wants Developers to include their own build/version of libcrypto. And/or on the newst macOS (especially arm64 | when using the newst macOS SDK, such as Xojo 2021r1 does) to link against a specific version. But since one can’t know which libcrypto version(s) Apple provides with it’s (upcoming) OSes - better include the version you need yourself.

So the big question for many of us is… How to build OpenSSL (libcrypto) and include it in a Xojo built app?

If you’re interested - here is an example project: macOS: OpenSSL - Bring your Own

This example project shows how you can build your own OpenSSL Library from Source as a Universal .dylib (arm64 and x86_64), include it in a Xojo project - and finally use it in your application. It includes

macOS: OpenSSL - Bring your Own 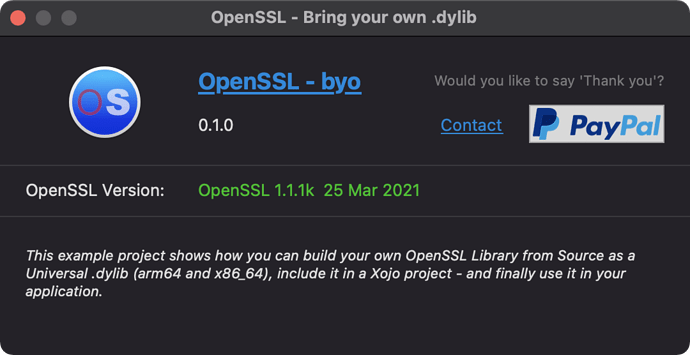 And just for fun… I have compiled the outdated OpenSSL 0.9.8zh as Universal (arm64 and x86_64). That’s a bit more tricky since you have to add/modify the Configuration for arm64 yourself. Notes are also in the example project. Not that I recommend that - but in case you are using Declares that only work with that libcrypto-version, and no longer with 1.1.1 - this might be a temporary solution to make your app working for a M1 Mac (as an arm64 build) without fiddling with existing Declares.

MBS Plugin has OpenSSL included.
If you let me know, we could add a few more methods for you…

You can get OpenSSL built for Windows from the CURL project: curl for Windows

Well, of course there are Plugins available. That’s even more convenient for most.
It’s just that this Thread and example is not about that

This one is for the curious, the interested and for those few in need of a “do it yourself” way.

Building should be quite similar to macOS, without the need of creating a Universal one.
I just haven’t done this myself yet because all our supported Distributions come with libcrypto versions we’re fine with.

Seems a bit more tricky to compile yourself.
If anyone has done so and would like to contribute, I’d be happy to add your Notes about “how to … for Windows”.

You can get OpenSSL built for Windows from the CURL project: curl for Windows

Another source to get built libraries for Windows: Internet Component Suite

Hi Jürg,
thank you for sending me the .zip version via DropBox.

I’ve updated the example with a build script that should work for OpenSSL 3.0.x.
It’s now located on GitHub: macOS: OpenSSL - byo

And I have tried to build the outdated OpenSSL 0.9.8zh as a Universal Binary.
I just don’t have a M1 Mac, so I can’t try that.
Should someone want to try: Download the built example app from the Releases.
Thanks for letting me know if that works on a M1 Mac.