How I hate CMD-B (and therefore the « Build » button too)

→ Compilation starts and clicking on the « Cancel all » button has no immediate effect.
Sometimes it has simply no effect.
Then, after a while, we have to think to reset the « Non release version » number (even if the compilation has ben canceled)
It’s a long time wasted.

Why do we have a shortcut and a button for such a rare action ? And why are they so close to very frequent keys or buttons ?
For me they are totally useless.

The funniest is that in the last Xojo Release, the Online documentation shortcut (CMD-?) has gone though it was much, much more useful than the CMD-B……

Command-B for Build ? It was a different one pre-Xojo (on the beginning). It tooks me years t-o se Cmd-B.

No Keyboard Shortcut for the documentation ? I already talked about it (2021r1 I think) and no one was concerned: they never read the LR…

How many times a week someone use the wrong one (Q) instead of A or S ?
Without saving ?

I have unbound the CMD-V shortcut. Makes my days easier. In Preferences, General pane, click the Edit... button under Menu shortcuts. Expand Project in the listbox, then double-click the Key column beside Build and remove the B.

Bah. @Graham_Busch Beat me to it while I was typing.

I’m very sneaky. I saw you typing thought I should get a quick response in

OK (and thanks) for the shortcut.
But we have still the #&@# button…

Well, that’s not new that if you click the wrong button, something else than what you expected would happen. This is normal in many apps and the cause of more than a single button most of the time

The only way for Xojo to prevent you to build by mistake would be to remove the toolbar button, menu item and command key equivalent (and the Xojo script command…); but then, it would get harder for anyone to build.

On macOS you can add Application Shortcuts to specific apps using the Keyboard in System Preferences. Just make sure you spell the menu shortcut exactly like the one in Xojo. 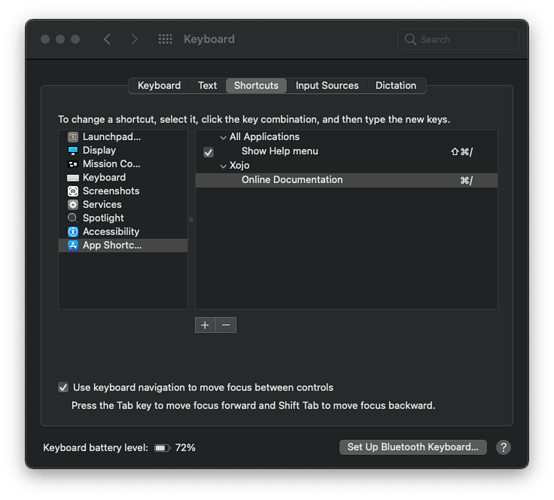 The IDE prior to Xojo would allow the user to re-arrange the icons in the toolbar. Now they are frozen. I used to have my build button all the way to the right, far away from the run button for this exact reason.

You can disable the build button by not selecting any targets in build settings.

Our project is huge and takes a long time to be compiled and linked.

For years, I’ve changed the menus in macOS keyboard shortcuts:
Build to SHIFT-CMD-B so I can build it when I want to, but not accidentally hit it when pasting.
Step Out to F1
Step Over to F2
Step In to F3

I would immediately forget these. Besides which, the left hand is not for typing, it’s for propping up the chin.