How do I set the list box scroll bar width?

I have a list box that has 2 columns and about 5 rows
The entire list box doesn’t fit on the screen (too tall)
so it has a vertical scroll-bar. Problem is that it is
too small for me to easily “grab” – how do make it
larger? (This is cross-compile for RPI) – is there a
property I can set?

just fixed that – its still to small
Ideas?

what is “fail”… it seems to be the size it is supposed to be… there is no “fail” in that.

if you want a custom width, then create your own, but that would be against OS guidelines

Im not trying to be difficult. But what is a fail is that users on my raspberry pi application cant scroll the list box. They dont care about Apple os guidelines, or anything else. They care that they cant scroll. So, how would I create my own ?

I am going to leave this conversation with one last comment.

If there was such an issue with the Scrollbar (on PI or any other Xojo platform)… I would suspect that this forum would have dozens of other posts complaining about the same thing… Seeing as that does not seem to be the case. I suggest your real issue lies elsewhere.

FYI… I said OS guidelines… not Apple or Microsoft specificially

[quote=454576:@Luigi Faustini]I have a list box that has 2 columns and about 5 rows
The entire list box doesn’t fit on the screen (too tall)
so it has a vertical scroll-bar. Problem is that it is
too small for me to easily “grab” – how do make it
larger? (This is cross-compile for RPI) – is there a
property I can set?[/quote]

From your description of “grab” I infer you are using a touch screen. The Linux interface has been created with a mouse in mind.

If the Pi screen is anything like Windows tablets, you may want to use two fingers to scroll.

make your own scrollbar using a canvas. you can make it any width you want. it’s just more complicated to build.
but it’s a very good programming exercice.

Looks like Raspian OS?
You could add your own scrollbar… Set the width to 25 or so.
If you want the slider to fill the trough, you may need to hack it a little with ModGTK3.

In the ModGTK css you could add something like 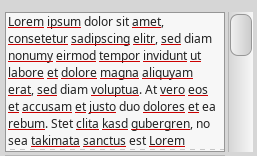 Of course any css mod would be app-wide.
Windows OS’s also allow resizing the scrollbar.

Thank you for the constructive help. I like the idea of adding my own scroll bar.
Heck, I could even just putin an “up” and “down” button… My next (beginner)
question is how do I force the list box to scroll up or down from another
control? is there a property or method to cause that to happen?

Again, thank you. I realize that I am a beginner have questions
that may seem obvious to many of you.

is there a property or method to cause that to happen?

You can set the scrollPosition

[quote=454599:@jim mckay]You could add your own scrollbar … Set the width to 25 or so.
[/quote]
just for the records, it doesn’t work on macos at least. the width of the scrollbar stays at system 15 value.

it doesn’t work on macos

Yeah. Leave it to Apple…
If you set the width, you’ll want to do something like

Apple needs to go back to using scalable vector based graphics for controls etc
Don’t care if its PDF, TIFF, SVG or something else but hard wired control sizes make a lot of things a pain in the rear

[quote=454616:@Luigi Faustini]where would I put the line
scrollbar.vertical contents slider{min-width:20px}
???[/quote]
If you download the ModGTK3 project above, you can run the project and there’ll be an editor. There you can try different values.

To use it in your project, copy the GTK3 folder to your project. Then in App.Open, you can load the css with something like