This item was deprecated in version 2021r2 .
Please use GotoURL as a replacement.

for ShowURL, I said that I will give it a try but once I replace it with GotoURL I get

Item does not exist

While on the docs it does say

Desktop and iOS project types of all Desktop, iOS and iPadOS operating systems.

Any idea why it does not work ?

Should I open a feedback case ?

I think some things that were planned to deprecate in 2021r2 were moved to 2021r3, this may be one of those. 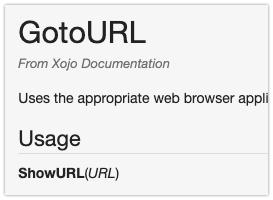 I don’t know if there is a Feedback case for this, if not, you can open one.

This is the entire content of my CancelLoad event handler, if it helps:

Maybe it is only a docs bug, instead of just “GotoURL” it is “System.GotoURL”

It works for me if you put the “System.” in front of it, but the documentation doesn’t indicate that the “system.” is required at all. (edit: darn, Alberto beat me to it)

I think it is a docs bug. But perhaps the release notes must have said something, else I wouldn’t have known to use “system” either!

Steps: The attached screenshot shows the docs for system. When using ShowURL I’m told that System.GoToURL is the replacement. But the method is missing from the docs.

At this point, I have to ask. What was wrong with showURL?

Haven’t a clue what is wrong. Not verb-y enough?

Nothing , just saw it deprecated and I said that I should replace it with the new one to avoid the headache of adapting it later, but I guess it was to early . I’m still using ShowURL for now

Ah, from XOJO point of view ? no idea either, I guess they are adapting the api to fit their needs and add something new to it

in console apps, neither ShowURL nor system.GotoURL exist. The latter autocompletes but fails at compile time. Go figure.

I suppose nothing change except that we need to add System. before the instruction. For Beep → System.Beep , Xojo kept Beep because it is to much common (I guess).

Neither apply to a console app. Maybe it’s a bug that it autocompletes.

Oh? I did not realize. Why would we not have the capability to invoke URLs from a console app? Works just fine with a shell open command.

At this point, I have to ask. What was wrong with showURL?

Haven’t a clue what is wrong. Not verb-y enough?