I have a windows app that uses dual screens. Screen 1(0) is 1024 wide and Screen 2(1) is 1680. If they were both the same size I could just set me.left = 0 and it would be fine but they aren’t. Or I could use me.Left = (Screen(0).AvailableWidth-me.Width)/2 but they aren’t the same size so that won’t work. Setting me.left = 0 moves the app to the big screen (screen 2) where it shouldn’t be. I guess maybe it uses the bigger one by default. Any help on resolving this would be great. Thanks.

i guess you need reorder the displays in windows os system settings?
left 1 main screen and to the right display 2
and then Screen(1).Left should be position of the second screen.

That will not work for me. The smaller one is the main display in Windows, it has the “make this my main display” checkbox checked and grayed out. I want that to my my main display, I run other apps on it.

and your windows settings where the displays can moved by mouse reflect how the monitors are arranged in real?

This is what I would expect as that is the way the windows are ordered in Windows and the smaller is the main display. Does it matter that the type of window in my project is a Moveable Modal? I have it this way to avoid seeing the title bar.

I am unsure of what answer you need, but usually, the OS opens new windows on the largest screen (not always *)

Murphy’s law: Gimp (for example) open some “dialog” on the smaller screen here (the external; less size, less dpi than the internal screen).

I see what you’re saying, I’ll have to check that out. I really don’t want the title bar on the form so if it has to be a form then I have to jump through some hoops that way. I’ll look into it, thanks.

So being a moveable modal is not the issue. I changed the app to a document and it still shows up on the second monitor.

A quick scan of feedback I can’t see a similar ticket open but there are so many reproducible/verified tickets that match “window.left screen” it could be hidden in there somewhere.

Other than using declares, I can’t think of a way to move the window to the left screen, I tried altering left and bounds and they both moved the window to the left edge of the right screen. Someone else might know of a workaround for you, if not I can take a look at the declares if you want? Just let me know.

Did you set the target screen in the properties pane ?
(to main screen for example ?) 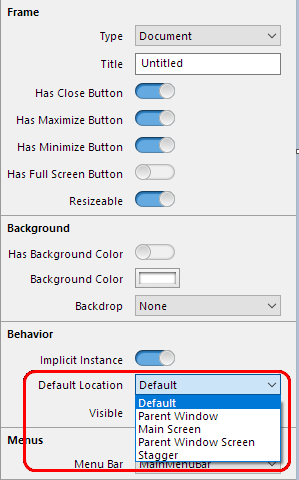 Ifn fact, choose the one you want / need from the list.

Interesting. Never seen the options before. But what exactly do they do? Which value is recommended? For instance, I have an odd bug with a sheet window. The window escapes its parent when there are 2 screens.

OT
at windows os i use often parent window because if i move the main window i want a new window or dialog near by. sometimes i also use a method to put a new window where i want with the size i want.

That should position the window left of screen(0). It does not matter if each screen has a different resolution.