Does Xojo still use REALbasic as a programming language?

Me thinks the answer is no.

And this goes far away in that direction:

I am not complaining,I realized it when I read that line (part of an advice), yesterday.

When will we see the Java return in Xojo ?

Mixing both can be a bit troublesome, and you must be careful, because the older variant is 1 based in some functionality, and the modern one is 0 based. Also the modern one raises exceptions where the older one just silent fails.

When you see people talking about Xojo API1 (older) and API2 (newer), it is due to this kind of distinction.

I am with REALbasic since the alpha versions of REALbasic 1, back in 1998 (may, I think).

So, I know what you write above.

My point is different. I was talking about the Language, the paradigm.

If this trend continue (and it will), we will have a completely different language that looks like… Java (or some other I do not know ?).

It is not an API 1 vs API 2; this is what you called older vs modern.

.ToString was not present in the first Xojo release (back in 2013).*

Your point is exactly what I said. Xojo made a radical redesign of the language, so it now has 2 languages in one, dialects. And the older one will die with time, as the “API1” is being “discouraged”. So the “matroska” functional system will be deprecated in the future by the more clear, sequential chaining method invocation equivalents, like:

Using your example, “Java”, Java today is not what it was in 1996 in the JDK 1.0. Enums, Generics, Iterators, Lambdas, etc, literally thousands of changes, comes to mind.

So to answer the topic question, yes, Xojo is still its root language, and no, Xojo is not the same language. A kind of Schrödinger’s cat. Two dialects superposed at the same time, but in a distant future, dialect1 will naturally die.

A kind of Schrödinger’s cat. Two dialects superposed at the same time, but in a distant future, dialect1 will naturally die.

But only if you open the box and observe it.

A kind of Schrödinger’s cat.

But only if you open the box and observe it.

I said “a kind of” because in the Schrödinger’s case, if you open the box, you will get an unknown state that the opening it, interfered, but the result still be random. In Xojo’s case, older devs opens it and can find Realbasic, newer devs opens it and only see modern Xojo, the observer alters the sample, but not in exactly in a random way. But the 2 states are there in the closed box.

My point is different. I was talking about the Language, the paradigm.

If this trend continue (and it will), we will have a completely different language that looks like… Java (or some other I do not know ?).

In all those years the programming language did evolve, whether it was called REALbasic or Xojo at the time. Some steps in that evolution were greater than others, but I never got the impression I was suddenly dealing with a different language – certainly not Java or anything like that. But then I was happy about most of these changes so I wouldn’t complain.

I agree to a large extent with the idea that changing vocabulary has often been more pedantic indulgence than real necessity.

Using Var instead of Dim, for instance, is downright redundant, and brings nothing to the table. Except, indeed, make the language sort of Javaesque

If, and only if API 2.00 is really implemented throughout all platforms, including iOS and soon Android, perhaps would justify a dialectal change. Only if I can take a desktop source and move it to iOS with a minimum of fuss would that be beneficial. But I still have my doubts. Let alone because the pesky and cruel obligation to go through abstruse auto layout constraints remain.

Why insist on making left and top read only being idiotic in the first place. At least XCode allows using those values directly, without having to cope with convoluted constraints. And if Apple tool offer such facility, I frankly don’t appreciate Xojo forcing me to gulp undue complexity

I don’t really mind dialectal differences. A good programmer should be able to find his way through different languages. I just find that kind of ridiculous.

- Source: Why does Swift language change significantly with each new release? - Quora 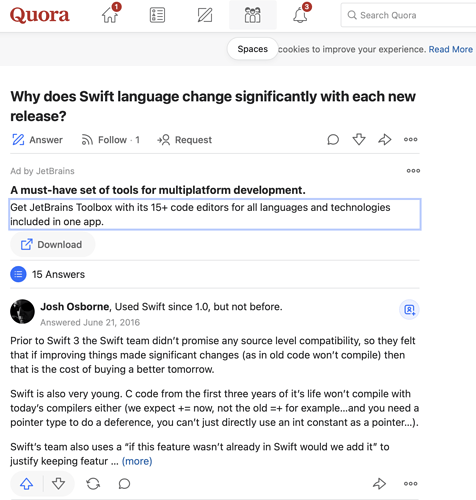