I want the application to detect with system it’s on and select according to the system the correct path.

you can possibly call a shell command to get the hostname of the running system? Assuming dev and prod have a different name? Something like this:

In any case the shell is likely your friend, for this case of challenges. Try solving it in “in Linux” first and then execute this shell command from within your Xojo program via the shell …

I thought shell was going to be the answer but wasn’t quite sure. I’ll give that a whirl after I finish some other stuff and let you know if this solves the question! Thank you!

Hmm, okay I am getting a return value but when I test for it to select the code I want to run it doesn’t work… 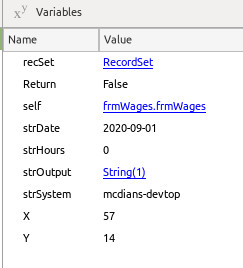 Here is a capture of the debug data…

I have 6 areas this is supposed to be used and it’s not working in any of them. And as you can see in the image in the above post, strSystem has my system name in it so the data is being obtained and returned.

John, you should inspect the string for extraneous spaces. If they exist, you can use the Trim function.

Hmm, I’ll try Trim. I did look for spaces as that was my first thought… could be a carriage return maybe?

Hmmm, thanks! That worked!