A DesktopListBox has 4 columns. When showing the scrollbar (MouseEnter event), the 3 rightmost column titles shift to the left as the scrollbar appears. Column title text are then out of place, not in line with their rows beneath.
Config: Xojo v2022r1.1; MacBook Pro M1, macOS 12.4

How can this be prevented?

Looks like that in the header, column’s width are shorten a little bit. The side effect is that columns to the right shift left. Looks like the farther you go the right, the longest get the misalignment.

My first thought is that is a bug, but that would have been noticed.

Do you have any code running when the scrollbar is shown or hidden ?

My first thought is that is a bug, but that would have been noticed.

I’ve never seen such a misalignment before. I checked with almost the same configuration.

No event- triggered code running when the scrollbar is active. Only MouseEnter and MouseExit for scrollbar on and off.

Column widths are defined as %.

This is the code that populates the lis box:

The described behaviour is observed when the ‘Has Vertical Scrollbar’ default is set to False.

When default is set to True, the same columns shift to the right when the scrollbar disappears (MouseExit). Just discovered that.

When default is set to True, the same columns shift to the right when the scrollbar disappears (MouseExit). Just discovered that.

That confirms the columns shift when the scroll-bar appears and when it disappears. Did you check if in Issues a case was created about this issue ?

I wonder if it works fine on Windows or not.

When clicking into a row, the cells are also displaced to the new column position:

I can send you a project file.

Such an obvious bug would have been found before. Why would you hide the scrollbar when loading more data? I just did some check where I set “has vertical scrollbar” to false. And the scrollbar doesn’t show when the listbox has more data: 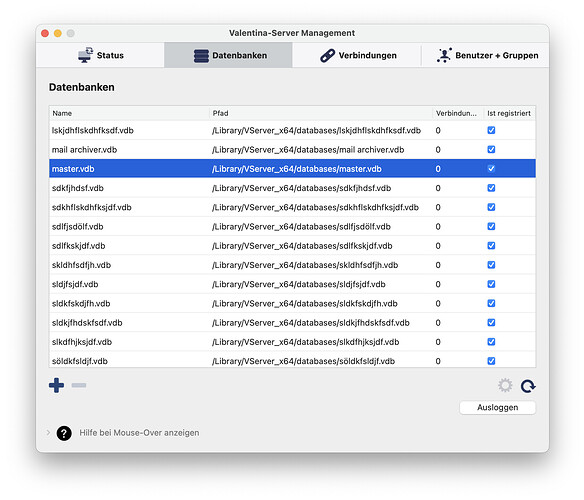 The intention is to not having the scrollbar around when there is no business in the box. Another refinement would be to show it only when there is actual scrolling (like in macOS).
However, column headers and row cells should not move when the scrollbar appears or disappears.
I suspect that there is something wrong with my code, but I don’t get it nailed.

This I found in Issues: https://tracker.xojo.com/xojoinc/xojo/-/issues/66442.
Not sure if it is related.

The intention is to not having the scrollbar around when there is no business in the box.

Use NSTableView from MBS or the piDog DataView instead. Mucking around in the bowels of macOS is not a good idea.

Not sure if it is related.

Does not seems to be related, in this case when scrolling horizontally the header does not scroll at the same time as the data.

I will have a look later this afternoon to your project.

Try a fixed set of values for the width (instead of %, avoid *) for a test.

+1
… I gave up on the Xojo listbox a few years ago (mainly because it didn’t have the functionality I needed and I was getting tired of attempting subclassing solutions) and went with piDog DataView. Besides having a boatload more built-in functionality, whatever few problems (bugs) I discovered, were fixed expeditiously by Jim McKay (piDog). Interestingly enough, one of the bugs I discovered was nearly identical to the issue raised here with text alignment dependent on a combination of presence/absence of the vertical scrollbar (which was set for auto) and the manner in which I was employing colorized headers. I sent Jim a sample file and had a fix within a few days time. I have literally dozens of DataView instances working flawlessly in most of my desktop apps doing a host of things I couldn’t do natively with the Xojo listbox.