Forbes just posted an article stating that Apple only approve 15 Mac apps a MONTH on their Mac App Store (in the past they’ve stated they reject anywhere between 50~66% of submitted apps). 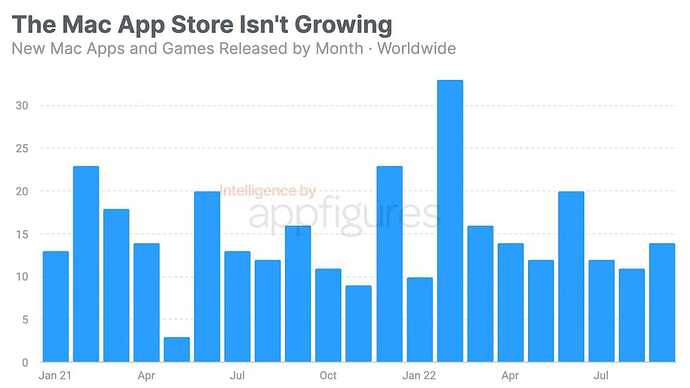 Apple’s Mac App Store Adds Just 15 Apps Per Month vs 15 Per Minute For The...

Apple’s app store for the Mac seems to be stuck in neutral, according to a new report from analytics firm AppFigures. Launched over a decade ago in 2011 with a thousand apps, the Mac App Store now contains just over 31,000 applications ...

For many of us, we’re not surprised that there’s less Mac apps than iOS, but just how little is really bad. There’s a great numbers of reasons as to why many a developer has quit the Mac, heck just keeping your Mac app working year after year is a challenge, especially when the money coming in isn’t as good as it used to be.

This presents an opportunity for Xojo, especially given how both 1-Password and Spark have re-written their Mac apps in a x-plat tool. With both these companies, they actively promoted the tools and frameworks that they used, Xojo NEEDS to be in on this game!

I hope that the powers which be at Xojo would set-up a war room (as per say) and figure out exactly what developers need to re-create their Mac apps in Xojo and enjoy the benefit of creating native x-plat apps, that don’t use half a gig to display a web page. It’s not going to be easy and I know that Xojo isn’t going to like a single one of the things they’ll need to do, but I think they should really take advantage of this opportunity, especially before it’s too late.

This is one of the reasons that I try so hard to promote the Linux side of Xojo and push for fixes. Linux continues to grow and if we can start providing 64bit ARM (notice I did NOT say Raspberry Pi) apps, we’ll have one more option for development that’s hard to get to with other tools.

Only 31,000 applications on MacOS, what a pity. Seriously that is not enough ??? What is the problem here ? Developers will be happy to create the app one is missing.

I remember a long time ago, many were predicting the end of PCs - fat clients - that would be replaced by terminals - thin clients. Look at M1 Macs, fat clients are still alive and kicking.

It’s not the death of Mac development. Just - hopefully - the beginning of the death for the Mac AppStore. Apple is still super arrogant and has learned nothing.

Just - hopefully - the beginning of the death for the Mac AppStore. Apple is still super arrogant and has learned nothing.

That would be nice, but I don’t see it happening with this CEO, if they only approve 15 releases a month, it’s not like it’s costing them anything to ruin the market, but to fix it, would eat into their profits, which would reflect on the stock price, and the CEO wouldn’t get his almost a billion dollar bonus, for stock performance.

But when I strip the (+/-) games from the iOS list… still a lot - but every time I have to update some apps, I got the feeling of visiting a toy store

I do not care, I do not have an iOS device…

I got the feeling of visiting a toy store

We’re never going to change that now, but the wave of ‘me too’ apps, ‘quick buck’ apps, and the rapid descent into ‘free, but we will hit you with IAP’ has driven down the end-users expectation of pricing.

I’m not in the App store for Mac any longer: sandboxing etc was too strict (stop turning the Mac into a phone!!) for one thing.

But I’m also taking a risk… I’m putting up my prices for the first time in 10 years, in January.
Wish me luck… as I have said in other threads (particularly in regard to new codesigning requirements on Windows), I’m predicting maybe 3- 5 years of sales left.

“If you’re developing for the Mac this might be shocking to you: The Mac App Store sees just 15 new apps every month on average,” says Ariel Michaeli, CEO of AppFigures. “That’s what the App Store, which sees about 1,000 new apps every day, adds in 20 minutes.”

Just for fun I looked at new macOS apps that were added last 3 three days (all version 1.0) and I counted 18 new apps.Makes me think how AppFigures is counting stuff. AppFigures is also highly recommended and sponsored by … Microsoft. Figures.

And no one talked about the quality of these “15 new apps / moth”, nor if they are useful…

Take LibreOffice as an example. Did you tried to create a data base with it lately ? (good luck: do not waste your time; use Xojo).

Have-you tried to copy text data from a pdf using Ventura (and Preview) lately ?
You better use QuickView and Select your text from that window or download the Free Acrobat (not yet tested).

Surely it’s more ‘Death of the Mac App Store’ rather than for the Mac as a whole? Even then these figures are somewhat dubious.

It won’t be death of Mac or Apple Store, it will be just hundreds of thousands devs giving up on the platform, but lots of others trying the platform for the first time until giving up too few years after, cyclically. It has been this way for… almost a decade now? So it’s more like controlled kill of devs while collecting $ from them in the process than the end of Mac development. If devs start worryingly dying in flocks at some point they will announce that the annual $100 fee has dropped to $50 and increase the stock.

Linux continues to grow and if we can start providing 64bit ARM (notice I did NOT say Raspberry Pi) apps,

The only small issue is that apart from developers who address the corporate bespoke, there is no money to be made on Linux apps, contrary to Mac, Windows, iOS and Android.

Copying files found from the Search window worked fine until Ventura: now only one file can be copied at a time and you have to wait (somek a cigarette) before being able to copy another file… Weird !

It’s not going to be easy and I know that Xojo isn’t going to like a single one of the things they’ll need to do, but …

My english is not very good Sam and I may have misunderstood what you wrote but, isn’t Xojo already cross plate-form (1) development tool?
(1) : that’s what means x-plat I suppose.

Apple just provided a new niche for some developers:

… who address the corporate bespoke, there is no money to be made on Linux apps,

My company of 21 years would be quite the outlier then since we made over $15M from 2001 to 2021 with just one of our products specifically for Linux. It was an IT tool, but it definitely wasn’t bespoke.

for ios i think most of the “apps” are games.
about apps for mac os,
mac cames with most apps that basic user needs, same for ipad.
about developing they moved from uikit to swiftui and generally u use a nag framework with fragmented docu or examples for older uikit.
for devs which use swift 5 it is really difficult to develope a app because the concept of swift ui and apples framework.
currently i create a kanban board app for mac os and ipad just for fun and i can compare
the effort with xojo and pure basic. (guess what is the fastest development)

Lol! I have a good idea for this… maybe I’ll slap something together just for fun. I need such a tool if I am to upgrade to the latest OS.