According to the documents OpenGLSurface was deprecated. 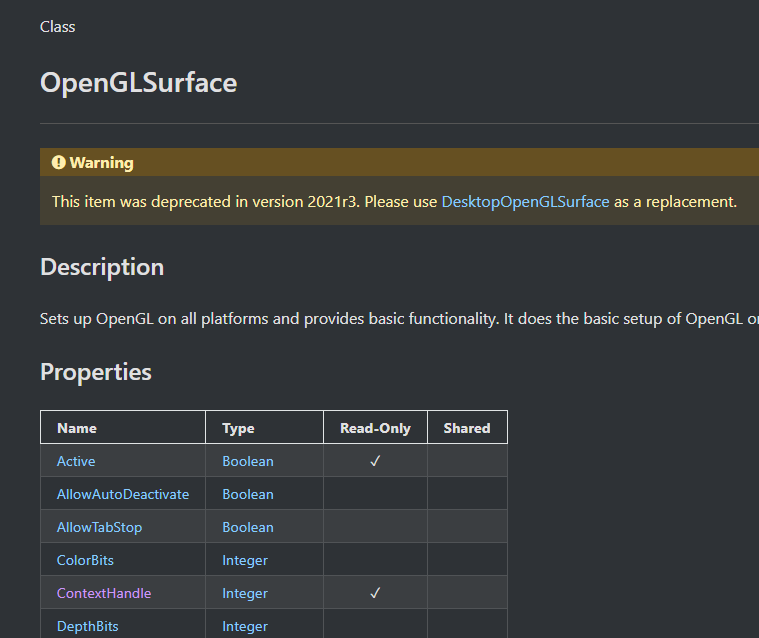 Up to now I had used Control(OpenGLSurface).Handle which was an Integer without problems.

I need to use the Handle in a Declare. Which value have I to use?

Thanks for your help.

You’ve put this thread in the private Testers channel for an old, now released version. You should post in General for more public visibility.

You are right.
Can I change the channel or do I have to text it again?

How do you want to make further use of the handle?

Thanks Anthony. How did you do it?

This is the code I have been using for many years and it worked perfectly well.

I am a forum moderator.

OpenGLSurface (deprecated) and DesktopGLSurface both have a ‘ContextHandle’ property of type integer. Means ContextHandle’s type should be an integer, not a pointer.
I did not check in the IDE, but if ContextHandle’s type now is a pointer, I would consider it being a bug, at least an inconsistency between IDE and documentation.
Handles and pointers are not the same (ref. Wikipedia)
In Xojo, the term ‘handle’ is used for both handles and pointers:
DesktopControl property ‘Handle’ of type ‘ptr’

Yes, you are correct that the ContextHandle should be a pointer, not an integer.

Here is a method from my Declares book to create a memoryblock from an integer memory address.

From Xojo’s documentation: memoryblock, the pointer can be retrieved from a MemoryBlock in two ways:

You could change the declare to take the ptr instead of the integer.
or cast the ptr to integer.

Ptr and Integer for the handle should have the same value.

Thank you Anthony, Torsten, Eugene and Christian for your comments.
I think I will give another go and tell you about the result.

and I get two different pointers. Is it normal?
Anyway, when I try to convert these pointers to an integer (Var kk As Integer = k.Integer(0)) the application crashes.

According to the documentation:

You can compare one Ptr to another Ptr or to Nil.

You can convert the value referenced to by the pointer to a specific data type using the available methods.

You can assign a Ptr to a MemoryBlock.

Anyway, when I try to convert these pointers to an integer (Var kk As Integer = k.Integer(0)) the application crashes.

That’s because they should be casted to an integer instead.

Dim I as integer = integer( desktopControl.handle )

What your code is doing is getting an int64 at the ptr location, not an integer of the pointer’s location.

Thanks Sam. You are right. In fact I was thinking about it but I didn’t know how to do it,

I tried, and the second one

I think that the clue of all this is here: 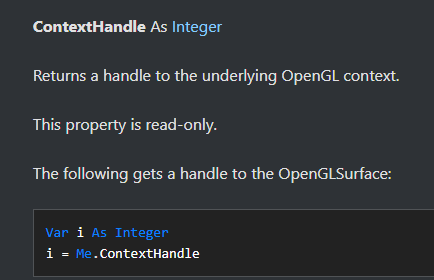 Although there is an error of variable type (ContextHandle is a Ptr, not an Integer) it seems that the pointer is to an “underlying OpenGL context”. I have no idea what it means, but it seems that the “underlying context” is not the “handle”.
That’s what I think, but obviously I am not sure at all.

The documentation is short on this and should be amended accordingly.

A context in Opengl is a pointer. Opengl is given numbers and the context provides the meaning behind the numbers, which is referenced as a pointer.

The pointer to Opengl needs to be known by the window that draws Opengl.

If you are using glfw then you can use the command getcurrentcontext (I think that’s the name, I am not at my development computer)

I tried, and the second one
Dim kk As Integer = Integer(DesktopControl(OpenGL_Surface).Handle)
works!! But why??