Can't get app added to Privacy/Automation

The user has 2 computers. One one computer my app works fine. On the second one the app is declining Automation approval on it’s own. I let the user reset Automation with a Terminal command. Then I made him a test app with the following code from the MBS plugin examples:

The full app has the usual plist, codesign, notarisation. I made sure that the test app has the same.

Neither the full app or the test app show up in the Automation pane at all for the user.

Instead of getting the usual “blabla wants to control Mail” the result is an error -1743: Not permitted. Any ideas what else I could try to get Automation working?

Has your user tried to restart its computer?
I’ve seen such restarts reset weird things regarding the “new Apple privacy system”.

Thanks, I think I forgot to ask the user to restart. §$%& security.

You’re welcome; though it can be very well another issue.

Can we still name it that way? That’s rather a “lock out”…

I now had reports from 3 users that they can’t get access to Automation.

They all restarted their computer. No change.

I made another test version with a different bundle id. But I didn’t get anyone to test that - too complicted.

I suggested for 2 of them to contact AppleSupport. I hope that they get back to me. I’m going to do a Zoom session with the third tomorrow.

One user has 2 computers - one with Crapolina and one with Monterey. My app makes problems on Crapolina. Monterey is fine.

The only change I did compared to the last version of my app is that the app is now universal.

Send me the test app and some basic reproduction steps.

One user solved the problem on his own. I just did a screensharing with another user and everything works fine on his computer. I don’t know what he did before.

If there is no NSAppleEventsUsageDescription then I get the same result -1643 “don’t wanna” instead of asking for the permissions.

I don’t have a plist file but do everything in an IDE script with localisation:

The strings are in the plist where they should be.

Why does the app get the NSAppleEventsUsageDescription in debug and after building but not in the notarized dmg?

I can reproduce the behaviour. If I pack and notarise a test app with AppWrapper then AppleScript doesn’t work. App is available at http://mothsoftware.com/downloads/max-test.zip .

There are indeed no privacy usage strings in your test applications plist. I don’t think it is a bug with App Wrapper as App Wrapper also uses them (you can check the App Wrapper plist file if you like).

I am a bit confused, you say you don’t use a plist, but then say they’re in the plist. AFAICT that command line snippet processes the localized version of the strings and NOT the actual plist.

I think I need more information for this.

Otherwise please send me a copy of the unwrapped application and your App Wrapper data file, so I can attempt to reproduce it here.

Otherwise please send me a copy of the unwrapped application and your App Wrapper data file, so I can attempt to reproduce it here.

I’ve sent you the test project and the AppWrapper file.

Probably this is my stupidity - as usual. In version 6.1.3 I’m using an entitlements file:

AppWrapper doesn’t have an extra entitlement for AppleScript. Instead it has the following section:

My guess is that the switch does the entitlement.

My guess is that the switch does the entitlement.

Correct. The field “Usage string” is also where you add the “Default” usage string.

I got the test app working fine with AppleScript. The final app does NOT work. Does AppWrapper propagate the AppleScript entitlement to helper apps?

I see, so the AppleScript is being called from a Helper. Is the helper being launched by the main application or another application, say the commandline or a something?

Is the final application for the Mac App Store or website deployment?

Click on the “Options” button next to “Code signing” in the sidebar and check the "Nested executable entitlements popup menu.

What is the difference between Inheritance, Inheritance Plus and Main Entitlements? Isn’t Main and Inheritance the same?

Both Main and Inheritance plus don’t work. What now?

The “Helper” app is an app that is installed by a self written installer. No commandline. The final app is for website deployment. 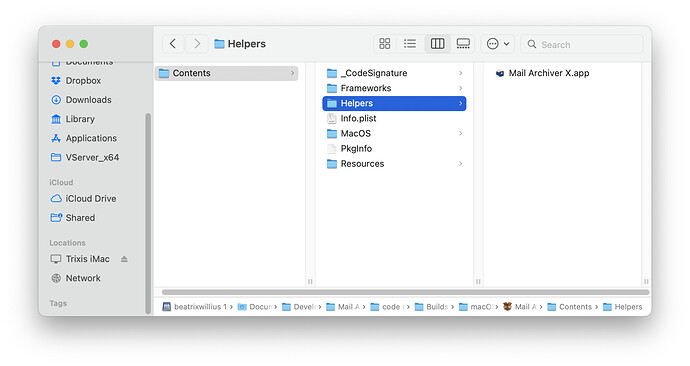 AppWrapper is overwriting the existing entitlements. In the old version of my app I used an entitlement plist file and did the codesign in code. The current version should use only AppWrapper for codesigning, creating the dmg and notarisation. But I forgot to take out the codesign.

I just did a test where I built the app and then only used “Pack & Notarise” instead of “Wrap, Pack & Notarise” and I finally got the automation correct. Now the path of the second app in the dmg is wrong but at least I’m making progress.

How can I script AppWrapper not to do a codesign? Using “Wrap, Pack & Notarise” fubars the Automation security even with "“Nested executable entitlements” set to none.

If necessary I can do my app in 2 steps for a while.