Can be compiled across Windows platforms

Does the latest version of XOJO support Mac Intel or ARM applications generated on Windows?
If so, is there a choice between M1 and Intel?

A Mac is required to build for Apple products.

After the MacOS option is checked in XOJO 2020, the Compile button is grayed out. Does this mean that Windows native application compilation for Mac is no longer supported in the new version of XOJo?
As far as I can remember, versions prior to 2019 can be compiled across platforms.

Xojo used to be able to generate 32-bit macOS apps on both Linux and Windows. This is not currently possible for 64-bit macOS applications. There are a number of threads on the forums discussing this at length, including statements from Xojo that they are currently working with the LLVM maintainers to implement this ability.

You could previously build 32-bit apps for Mac under Windows, but there is a problem for 64-bit apps. As 32-bit is no longer available, then FOR NOW you can’t build Mac apps under Xojo-Windows.

Thank you very much. Looks like the Mac is a must.

I would expect that when the llvm project gets the linker to run on Windows and output to MacOS, Xojo may bring it back.

But you still need the Mac to do notarization, code signing or to create a dmg.

yep it seems that even if LLVM recover the ability to compile for mac from a windows machine
you will still need macos only tools to sign the app.

I downloaded Ubuntu for macOS (?), and it was saved as .iso. I was able to burn a DVD with that .iso, then boot from that DVD.

Maybe .dmg is not mandatory. I do not make more tests.

As 32-bit is no longer available

Yes, but recent versions of Xojo do not include 32-bit compilation for macOS, so you’d still need an old version of Xojo. 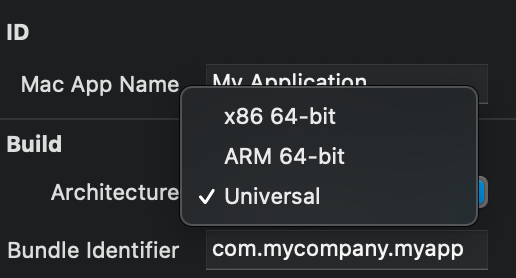 Maybe .dmg is not mandatory. I do not make more tests.

Mandatory, no. Strongly expected, I’d say yes.
dmg is more integrated than other formats and looks more usual, in Mac.
When I get a Zip file for an application I download, my first though is “Ah, this has certainly be made from someone not knowing Macs so well” and my initial feeling starts bad (I expect to see a Java-like app or am already psychologically deceived).
And .iso is clearly not used for software delivering on Macs. That’s rather a format usually seen for converting CD/DVD medias to a disk image.
And I’m not the only one with these thoughts.

Arnaud:
sure you are right.

I only wanted to say that it is possible.

And, you talk about everyone excepting Joe Newbie who will be lost whatever strategy you wll use (iso, dmg, zip, rar… tgz, whatever). And I do not talk about the “the applcation comes from an unknow developer”… even if Joe read English !

I only wanted to say that it is possible.

Ah, ok. Then, there are things that are possible but not worth.
If a Windows user, as (s)he should, has a Mac to test and notarise his/her application, then (s)he can make a dmg. Otherwise, the app can still be in a zip file (or another compressed format), but it’ll look unusual and, of course, the app wouldn’t have been notarised nor correctly tested.

Last but not least, specifically about the ISO format, it’s a whole file system, as per its designation. It’s like buying a 1 Tb disk to store a 64 Kb file alone. You can do that, sure. But advertising for it is perhaps not a good plan

And, you talk about everyone excepting Joe Newbie who will be lost whatever strategy you wll use

Actually, I talked about no one in particular.

dmg have been there since at least Mac OS 9. It has a good reputation and is the recommended choice. If a new user, knowing nothing, looks for help on installing an application, (s)he’ll first read about the dmg practice and learn that.

“the applcation comes from an unknow developer”

Currently, zip and dmg files must be notarised. I don’t know about the others (tar, iso, custom archives one may have made with an app, etc.). I’ve always found it strange Apple requires one to notarise zip but not tar, although they serve the same purpose and can both be decompressed natively (well, the inner app still has to be notarised, anyway).
I expect the ability to have apps on other formats than dmg or zip without needing to notarise them will eventually become unsupported from Apple…