Im about to issue an update to an existing app.

On the ‘whats new’ page, I have the ‘opportunity’ to add new screenshots.
Knowing that Apple lock things down as soon as an app is approved, I dont know if it will continue to use the first set of images if I do not upload new ones…
eg if I don’t upload any images, will my app
-have NO images
-use previous images
-demand a whole new set before I can submit?

Anyone know for certain that leaving the images blank just uses the existing ones?

&&%^&*% Apple.
So even though the screens haven’t changed, they’re insisting that I upload a whole pile of images again.
Oh well, at least they didn’t publish it without images attached.

When you press the “Submit” button, you can still change EVERYTHING you want regarding the app metadata and screenshots until the app changes state to “In Review” (usually 8-48 hours after pressing submit).
Metadata is title, subtitle, description, keywords …

You can’t change the build nor add new in-app purchases.

After the app is approved by Apple, you can still change in-app purchases prices and the promotional text.

And I completely agree, this change of screenshots size is a real pain in the @$$. I have to make more than 150 new screenshots for the next update of Packr.

SO… I recreated all the screenshots, and uploaded them.

Rejected.
Apparently a screenshot of each the screens in the app, showing all the options available is not ‘sufficiently reflecting the app in use’
Maybe I forgot to include a thumb.
SIgh

[quote=449037:@Jeff Tullin]SO… I recreated all the screenshots, and uploaded them.

Rejected.
Apparently a screenshot of each the screens in the app, showing all the options available is not ‘sufficiently reflecting the app in use’
Maybe I forgot to include a thumb.
SIgh[/quote]
so if your app has hundreds of screens which may alter their appearance due to a particular state of the app, they require you to upload every screen in every permutation? That is ludicrious

Yup.
The submit screen says ‘give us screenshots’

The rejection says (paraphrased) ‘add text boxes and pointy arrows to show people what the app does, even though the version you are submitting a teeny point release for didnt do that.’

I got the same kind of rejection after making 240 new screenshots last week.

I need to make another 80 screenshots for iPhone Plus 5.5" screens… What a waste of time

Didn’t they originally limit you to 3 or 4 “iphone” and same for iPad?
The App store isn’t supposed to also be an online tutorial for your app

I have 5 screenshots for iPhone Xs max, 5 for iPhone 8plus, a few for iPad. Multiplied by 21 languages

I could do things the easy way and use US English screenshots for every store, but that decreases download rate by 70% in some countries.

Apple allows up to 10 screenshot and 3 video previews.

I think my reviewer didn’t want to read 6 pages of user manual.

After seeing the screenshots for your app, I kind of understand the reason for rejection of your screenshots before you added text boxes.
Now it looks more like a user manual than an actual showcase of your app. I agree App Store reviewers can be very picky, but Apple always wants the best possible display of their products and their app market, the App Store.

You might want to have a look at Fastlane / Frameit tool to add titles to your screenshots and describe what your app does in a very nice way.
https://fastlane.tools

Please don’t see this as criticism of your work, I’m trying to share my experience with App Store marketing

I just (re)-discovered this to make beautiful App Store screenshots: https://iosjetpack.com
Well worth the $34 if you already have Photoshop, Figma or Sketch

@Jeremie Leroy : What does this mean: “Create an awesome presentation”??? How would the Jetpack help with creating screenshots?

I explain this in my session at XDC 2018 in Denver, if you have access to the videos.

Most developers forget that when releasing an app on any app store, [quote] You should spend as much time and resources into marketing as you should in development[/quote]
Developers usually focus on the product, making a good app, most of the times with no bugs, a good UI/UX but usually forget about the marketing.

App Store screenshots are part of the marketing. They should be meaningful, appealing to the person who is browsing the store and make them want to discover more. 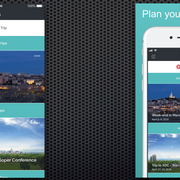 [quote]Screenshots of an app are the first sneak peak a user will get about the app. The first 5 seconds are decisive when a user searches for an app and is browsing all results.
Your screenshots should send a message.
The image on the left is colorful, but doesnt really send a message.

The one on the right has a title that describes what the app can do. It also presents the actual device frame which helps the user see what he will have in his hand when using the app.[/quote]

What I meant about “Create an awesome presentation” is to appeal the user within the first second of seeing your App on an app store.
Jetpack is an easy to use template to present screens of your iOS app with a mockup device frame, bright colours and a title that explains what the app does.

The word “screenshot” I use can be understood in two ways:
(1) The image saved to your Desktop hitting cmd+S in the iOS Simulator
(2) The actual image you upload to iTunesConnect when publishing an app

Even getting an image of the ‘right’ size seems a chore. Often a screenshot from the simulator isnt correctly sized, as they structly want images that match the exact shape of screen
Jeremie’s post above is very helpful, and demonstrates that Apple is happy to take ‘an image of the right dimensions’, which is not the same as a screenshot - I didnt know that.