Thanks a lot in advance,
regards!

Ok, just found the FAQ -> no update for Aloe Express so I have to switch to Aloe XWS.

I had not heard of Ale XPS so had to look at the site to learn more.

It appears to me that @Tim Dietrich is not removing Aloe Express from the open source community. Just does not plan any more releases himself past v4.1.1 – but that is not to say you need to switch if Aloe Express is otherwise working for you.

I have Aloe Express embedded in some desktop projects which also provide some REST like interfaces as an ancillary function. On a quick skim of XPS, those won’t convert over to XPS readily because XPS is based on a WebApplication class instead of (desktop) Application.

Did you have a specific problem with Aloe Express due to 2019R2? Being open source, it is possible to not only fix it yourself but also contribute those back to the community.

Thans a lot for the info!

2019r2 does popup a good amount of warnings; as Aloe Express is not further developed, time to switch to Aloe XWS.

But You are right, Aloe Express could be changed; but it’s not my code and I want to use a library which is or may be further developed.
Unfortunately, found no other solution for web socket server at the moment (not at MBS nor ChilkatSoft)!

Maybe I change that but I wonder if there really is no other solution even licensed…???

Are the 122 warnings just deprecated items? If so, it will be years before those features are removed from the language. But I also understand your desire to use something being actively maintained or enhanced.

If XPS fits your needs and workflow, then you prefer to go that right. In my personal case, Aloe Express is being used in both desktop and console apps as more of an ancillary function and a means to remotely pull status information on the app’s primary tasks. So I can’t just switch to a WebApplication class model even though I have a Pro license.

Maybe @Tim Dietrich will chime in with more information on Aloe Express and 2019R2.

I just analyzed the Aloe Express module (v4.1.1) using Xojo 2019 R2, and 134 warnings were reported. Most of the warnings are deprecations, many of which are relatively easy to resolve. However, others are complicated in subtle ways, and will likely take quite a bit of time and effort to resolve. There are also a few “unused local variables,” as well as a handful of “unused event parameters” for subclass events.

The good news is that none of the warnings appear to be show stoppers. So, in theory, you could choose to ignore them. However, if you’re like me, you probably consider deprecations to be technical debt. If that’s the case, and if Aloe Express is important to your apps, then you’ll probably want to take the time to resolve the deprecations.

Another option to consider is using Aloe XWS, which I released this week ( https://aloe.zone ). Whether or not XWS is a viable option for you will depend on your situation. Here’s why…

Aloe XWS is designed specifically for developing web services and similar apps - so it lacks many of the features that were in Aloe Express. Also, XWS subclasses Xojo’s WebApplication class, so it can only be used in Xojo Web apps. XWS is not a drop-in replacement for Aloe Express, and depending on how you are using Aloe Express, converting to XWS might take quite a bit of effort.

A short while ago, I posted an update to Aloe XWS which resolves a few deprecation warnings that were reported while analyzing it using 2019 R2.

Downloaded 2019r1 version and the compiler complains as it was saved from a newer version of Xojo. When I try to compile (2019r1.1) I get comments like ‘string has no member Count’ and similar.

I accepted the dialog that Xojo produced when it mentioned that the file had been created in a newer version etc.

Am I overlooking something simple ?

between version 2019r1.1 and 2019r2 they renamed a TON of stuff which is why you get those errors

Realised that but then what was the point in @Tim Dietrich having a 2019.1 version then ?

Realised that but then what was the point in @Tim Dietrich having a 2019.1 version then ?

I presume because not everyone will be using 2019R2 for various reasons, and he wanted to release a version of XPS that was saved pre-API 2 .0?

His web page also suggests he wrote XPS well before 2019R2 betas were available, since he has been running it himself since early 2019. So chances are what he released is what he had developed and tested. Then just recently posted a 2019R2 version just to help reduce deprecation warnings for those trying it under 2019R2. Or at least in this thread above he said:

A short while ago, I posted an update to Aloe XWS which resolves a few deprecation warnings that were reported while analyzing it using 2019 R2.

Thanks. Once again though - the project has lots of issues in 2019.1 version that seem to be related to the project having been saved in 2019r2 (my guess).

The Aloe XWS version numbers aren’t meant to match up with the Xojo version that they support. Confusing, eh?

In hindsight, I should have used a different versioning scheme. But this is what I’m seeing from Xojo and other systems (such as NetSuite).

Anyway… Neither version of Aloe XWS is Xojo 2019 r1 compatible. When I get some time, I’ll pull an older copy that is compatible and make that available as well.

Sorry for the confusion.

Ah ok thanks Tim. And yes, if you get the time, a 19r1 compatible version would be awesome

Thanks for your continued efforts and generosity.

Does aloe.zone work ? I’ve been trying to access all weekend. Was getting connection reset errors. Now I see SSL errors…

It looks like something got misconfigured. You’d have to reach out to Tim D for him to fix it. There are github forks in this thread if you’re looking for the project Aloe Express to API 2.0?

I’ve made some work to convert for API 2.0 : https://github.com/Valdemar-VDSC/Aloe-Express.git 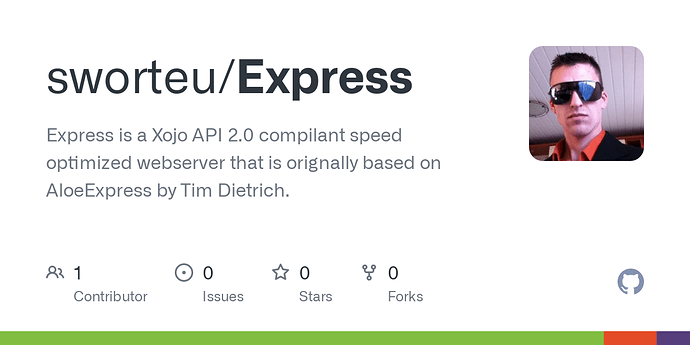