They’ve switched over to Electron for cross platform. Apparently SwiftUI wasn’t worth it for iPhone/Mac code base sharing. 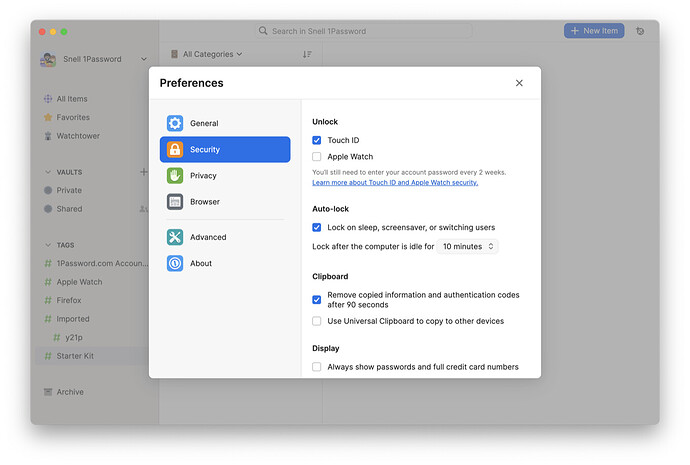 I think Xojo should call up AgileBits and see if they could use Xojo to make their 1 Password app for Mac, Windows and Linux.

This is an opportunity.

There are plenty of other password management applications for Mac/iPhone. One of them is my PassDirector - Encrypted, secure database for Mac macOS and iPhone | PassDirector

Except… that’s not really true. From their blog:

Ultimately we decided for a two-prong approach. We would build two Mac apps. One written in SwiftUI that targeted the latest operating systems and another using web UI that allowed us to cover older OSes.

Edit: I’m really curious about Snell’s source on the matter. He claims what AgileBits says is not true, that they abandoned the dual app approach. But doesn’t back that up with anything. The comment about the preferences window doesn’t make much sense, because sheet windows are fixed within their parent even on native platforms. I have not touched 1Password 8 so maybe there is something obvious, but why should I doubt what AgileBits has said? 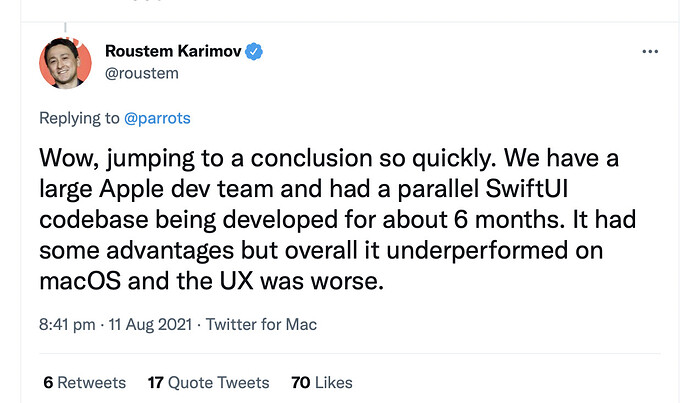 Assuming that tweet is correct, they need to update their blog post. But I think it paints a clear picture what happened. AgileBits greatly prefers native development, which is why they chose SwiftUI. As the blog post says, it’s where they believe the future of macOS development to be heading. So they chose to invest in it. After about six months, they concluded that SwiftUI isn’t as polished as they need it to be and were presented with a difficult choice. Either they delay by at least six months, or pivot to Electron on all versions of macOS. From a business perspective, there is only one choice in that scenario.

It’s not that AgileBits has given up on native macOS, it’s that they made a bad investment, got burned by Apple, and now have to pay the price.

To me this is a tempest in a teapot. I use 1Password on the Mac and I rarely open the full app, usually using the mini version from the menu bar or in Safari to get to stuff or edit entries. So I can live with the bloat for a couple of minutes a month.

The biggest problem with 1Password 8 seems the fact they are going to abandon iCloud syncing, so basically only pushing the subscription model for 1Password.com.

Well it’s not exactly surprising. As a cross platform developer myself, I’m not supporting iCloud either, and I have absolutely zero intention of changing that. iCloud syncing is only available on 2 of their 6 platforms. That definitely complicates tech support and tutorials.

1Password has evolved from a Mac app to an app available on basically anything. That comes with compromises. The developers on this forum should understand that better than most.