Also you can get the latest Windows 11 build through the Microsoft Insider program even if it’s not offered as an update for your machine yet. But I’d take JulianS’s advice and install it on a VirtualBox. Having used it for a couple days I’ve decided I’m sticking with Windows 10 until they stop supporting it!

Windows 11 is Windows 10 but with exceptionally UI customization and performance improvements. Every XOJO app I’ve tested works without error. I’ve been using Windows 11 for about 4 months or more now and I’m not going back to windows 10.

I have not seen any incompatibility issues with upgrading to Windows 11 with my programs since the release of Windows 11.

Thank you all very much.

Be aware that while everything seems to work the same under Windows 11, some of the controls look slightly different since Micro$oft changed some of the native controls.

Xojo apps don’t look right when using TabPanels, but it’s a relatively easy fix to change the TabPanel super to PagePanel and then use a segmentedControl (or other control) to change tabs.

I’ve had several users who are on Windows 11 report to me that Windows complains when they try to launch my Lightwright app. The message is “Unable to execute file: C:\Program Files\Lightwright 6\LW6.exe” and “CreateProcess failed: code 140. The requested operation requires elevation.”

Is there something new in Windows 11 that would make this necessary? Is there any way I can make this easier for the average user, who doesn’t need admin privileges to do their work?

@John_McKernon : what settings do you have on the advanced Build settings? 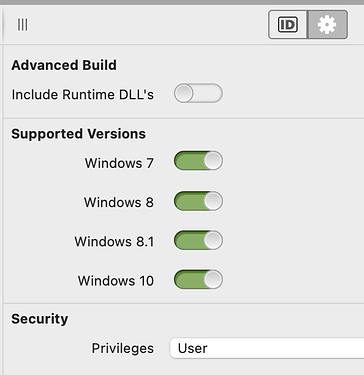 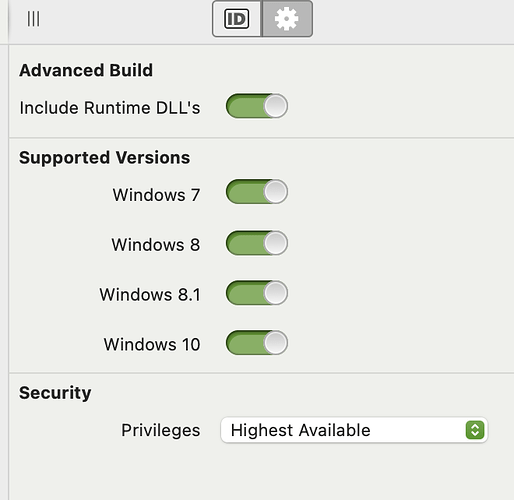 Well, sounds like a questionable option to have for most apps. If your app need Admin rights, choose admin, If not, choose User to avoid problems. Try to compile one with User and ask some of the users having issues to try it.

The only thing to keep in mind is that Windows 11 is only 64 bit. Windows 10 was the last 32 bit release. Besides that, it is mostly cosmetic changes. Anything that works on Win10 should work without issues.

Since this app doesn’t normally need admin privileges, I’ll put it back to User. It does have a helper app that needs Admin privileges, but I have a ShellExecute command that handles that very nicely. And yes, Lightwright is strictly 64 bit these days.

I assumed Win11 was going to be OK, but as it happens, I’m also suddenly hearing from users who have sporadic problems with EnableMenus causing the Windows version to quit suddenly without warning (and debug log files confirm it). I suspect this is something new in Xojo 2021 R3.1, but can’t confirm yet. I’ll dig into this and file a Feedback report if I find anything repeatable.

Personally, I will not upgrade to Win11 for at least a year after. They are still fixing and adding things. It is more in a beta state than a stable release. For example, one of its biggest feature, running Android apps, is still not ready months after they launched the OS. It’s coming in a month or two, but my point is that Win11 is far from finished today. I understand every OS has to be tested, but things are still going to change with Win11 in some dramatic way during the year with updates and fixes.

Check if your app is not writing or trying to make changes to a protected folder, like the Program Files. Windows 11 had some bugs with admin privileges, like letting low privileged users modify the registry.

With the your phone app in windows connected to an android phone, you can run Android apps on your pc now. I’m doing it with my surface Duo 2 and loving it.

Why do you use a backdrop on a canvas?

You could just paint the image in the paint event and have full control over the background of the canvas by drawing nothing before the background image.

Thank you all very much once again… My Dell has been finally upgraded to Windows 11 (by Software update automatically) and I have not experienced any issues with Xojo compiled applications - they are working exactly as they worked on Windows 10.

This raises the question why Xojo does not internally let the Backdrop just paint in the Paint event.

Since Canvas Backdrop has always been trouble some and for years or decades the solution is always to paint it your self in the paint event.