I have a Delphi app that shows al integers form 0-100,000 in a listbox and the numbers that are prime are shown in a second listbox. Calculation speed Delphi 1.9 sec. In Xojo I have the same app, and the calculation time is 46 secs. 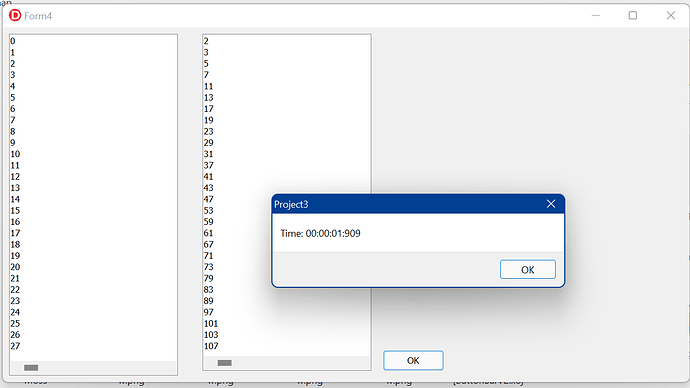 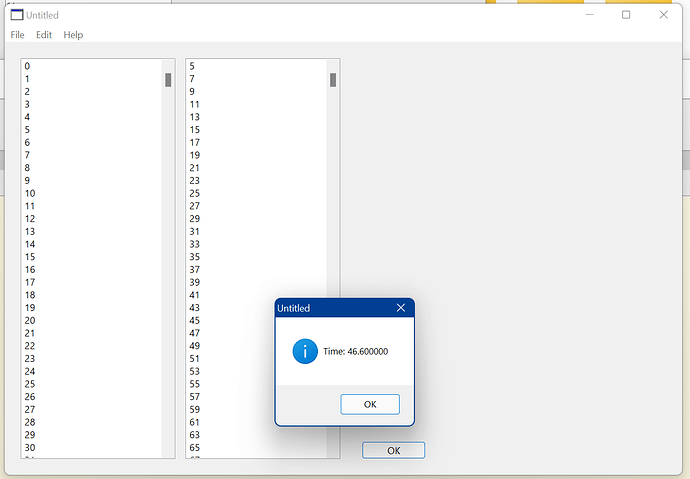 Heavy lifting of the calculation is done by IsPrime function:
In Delphi/Pascal:

The app fills the listbox in a for/next loop and tests every integer (which is not necessary, could do with only odds). Delphi:

This difference is huge. How to improve it?

But I agree with other replies - you’re testing 2 different things (calculation of primes and adding items to a list) and adding the times together.

There are other posts in this forum about list boxes with a lot of rows. There can be performance problems. And for a real application, how is a user going to navigate through 100000 items?

Indeed it does… didn’t notice that. That is strange as the functions are the same as far as I know.

Your isPrime function is buggy. The Delphi code does return true after the loop. Try this:

Yes indeed! Thanks for mentioning. With the bug fixed I and skipping the listboxes I get the same results in prime count and calculation speed is better now: Xojo is 0.41667 sec and Delphi 0.009 sec. Still a huge difference.

Adding to a listbox can add considerable time. I have a high-speed CSV parser with a test app that will show the parsed CSV in a listbox for inspection. On a 150MB input file, parsing 3,173,959 rows and adding to the listbox takes 76.45sec, while just parsing and not adding them takes 49.97sec, an over 50% increase in time. That said, we are talking about over 3 million rows, so that’s not too bad.

And here is my outer loop where the timing is just the loop without the output. It should be better to compare. Also I use Microseconds instead of Ticks.

PS. I set the window title because I don’t like the MessageBox

Thanks! That gives 408 millisecs and the population of the listbox is very speedy. Or is it microsecs. It should be about 0.5 sec so 408 should be millisecs though.

Speedy! I see you store both the integers in an array. My machine gives 0.5 sec Intel Core i7, 16 gb

Delphi has two methodes that can speedup adding items to a listbox.
BeginUpdate;
-add stuff-
EndUpdate;

Unfortunately, I don’t think Xojo has something like that. But that would be useful though.

Years ago look for a tool for my business. I tested with Delphi and XOJO.

As a result, I saw that Delphi generates a more efficient binary and handles Windows objects very well.

It is no coincidence that Delphi is faster on your machine.

Although the C compilation output is faster than Delphi, the latter almost comes close.

I do not mean that XOJO is not good both tools have their strengths. Delphi on Windows works fine.

If I had to read more than a thousand files to collect data, I would not do it in XOJO.

That’s because Delphi does not have a framework like Xojo. So .exe are very small, just like VS C++

Delphi was pretty great and probably the best RAD tool ever made. But after Borland did let it go (after bankruptcy?) it wend down hill.

A very good friend of mine (Didier Dambrin) here in Brussels made the very well known Fruityloops with Delphi, which is now known as FL-Studio. Lately also ported to macOS with Delphi.

Regarding to your comment. For my testing plan, I used Delphi with Embarcadero.

That is, with the current multi-device tool.

I bought one Delphi license since one month was not enough for the tests.

Now the tool is big, expensive, and takes a lot of resources. But the EXE continues to be efficient.

MarkusR’s solution is pretty quick in populating the listbox by reading the numbers in an array. Hardly any delay.

Double check docs for use, but place these at the very top of your code.

I tested this on a MacBook Pro 2.8 GHz i7 with 16 GB RAM and Xojo 2021r3.1. In all test variations I collect the values and set each ListBox once using AddRows per MarkusR’s suggestion. This results in a UI refresh time of ~0.035s. All times below are for the processing only. So the total time would be processing + 0.035s.

So using the pragmas and compiling on aggressive makes a big difference.

Using the Sieve of Eratosthenes against a boolean array, compiled aggressive with pragmas, I get 0.072s processing time. If I compute to 1,000,000 instead of 100,000 the sieve algorithm scales by 10 to 0.723s. But the IsPrime function doesn’t scale as well with a processing time of 1.255s.

For comparison, using Sieve of Eratosthenes in C against a char array, Xcode 11, the processing time is 0.000197.