For Next not displayed correctly on 2021 r2

In that case, Brian’s original suggestion of a screenshot would help. If that didn’t fix it, it may be that the For and Next lines actually don’t match.

A screen of what’s going on 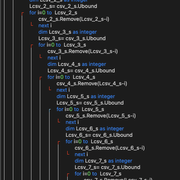 Wow. That’s a lot of loops using the same variable name. Let me play around here and see if we can find a solution.

What happens if you change:
next i
to
next
?

OK, the problem is the For line. Add a space before and after the = sign on each of those lines.

it’s working… now it’s displayed correctly, but I need rot indicate what next is been closed, as I’m making lot’s of recursive loops ones inside others, and not always the closest for is the one to close…

I just upgraded to 2021.R2 and it is driving me nuts… I now have a bazillion “errors” in my mainstream app that won’t compile to the point I’m considering going back to 2021.R1 simply to get it to compile, again.

While I can replace every “=” with " = " and then replace all the " = " with " = " it suggests the interpreter is a tad dodgy at parsing the syntax of such a BASIC (pun intended) statement.
(NB sorry double spaces don’t appear as such - there really IS a reason to use a monospaced font like Courier for code)

This particular one has already been reported and the case marked as fixed, IIRC. It probably wasn’t found because the Xojo Engineers (and, apparently, those of us in the Testers group) use whitespace.

They’re trying to put in some very much-needed changes to the editor, so there will be problems. No person or testing framework can account for everything, hard as we may try.

how did that get past testing, anyway ?

If I was still in the testers group I’d probably not have found this either as I always run my reformat code script which puts put all my code in a working state. I can probably guess at why this wasn’t noticed, but if you want something to help you in the short term, take a look at my reformat code script here, just go through the settings before you use it so it doesn’t make any unwanted changes to your code. All you need to do then is move the cursor up/down the code or cut and paste code chunks and it’ll fix things automatically.

However, if you have lots of errors distributed around a large project, it might just be easier for the time being to rollback to a previous version of the ide.

Judging by the stupid bugs which end up in releases I don’t think Xojo beta’s get much testing these days. Probably hasn’t been helped by Xojo throwing everybody out of the testers group if they don’t have a current license.

Yup after 2 hours of struggling with this in a project with ~20MB of source code, I’ve reverted back to 2021.R1. There are other issues that show up with R2 besides “=”.

After 20 years of RB/Xojo I settle on a rev that works well enough, and not upgrade until absolutely compelled to do so. Often several years.

And I long ceased reporting bugs, it never seemed to make any difference to how long it took for Real/Xojo to fix, and mostly the user community are the beta testers (hasn’t really changed in 20 years).

I just wait for bugs to get fixed… eventually. Sometimes I have to find creative workarounds to avoid a known show-stopper, or ditch Xojo for another environment to get the job done, but hey, c’est la vie.

As I said before… take a look at timers. Something so simple is now a mess of different syntaxes across desktop, web and iOS.

Thanks for sharing it. I’m downloading it right now for checking it. Anyway, just searching and replacing I was able to handle this issue with not reply too much problems

Just in case you missed it, 2021r2.1 has just released with a fix for this issue, I’ve not checked it yet but it might help you keeping with the newer version.

You don’t need to use any of that stuff. I removed it all from my app a couple of years ago. Just stick with the old framework and API2.

In Xojo’s defence, it’s super hard to write unit tests for UI components, especially something as complex as a code editor. I’m not suggesting they don’t try but it’s very hard to do well.