Can't Create a Folder in SpecialFolder.ApplicationData

Even if they are no longer named that way

Because when the User folder is on the Boot Drive the Volume Name is irrelevant. /Users/rowlands/Library/Caches

Thanks for confirming. I’m not even using Big Sur, so wondered. Additionally, I read (perhaps 2 years ago, already), that Apple wanted to get rid of the words “Macintosh” and “Mac” (“Mac OS X” becoming “OS X” and other things), including “Macintosh HD” could default to something else and “About this Mac” could become “About this computer”. But I think I read fake information.

Try with an older version. I think that the bug already has been fixed.

There’s also another way, keeping the current Xojo version (avoids quitting and relaunching). Write “app”, then Return (add a new line), write the remaining on the second line (e.g. “.ExecutableFile”) and then join both lines.
It has to become a habit, because in the beginning, you won’t realise you typed the period by mistake and it’s too late.

The IT person who’s installing Lightwright is using Composer, he is wondering if the owner permissions he’s setting are the problem. My instant reaction was “yeah, that’s probably what is screwing things up”. Here’s a screen shot he sent: 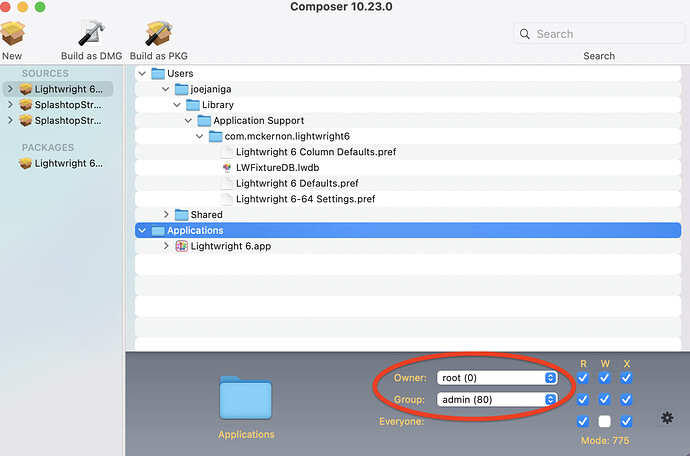 And the problem was, according to the IT person: “The policy was pointing to a folder that doesn’t exist on the lab machines as it was a carry over from my creation machine. The weird thing is that was never an issue on Catalina (and still isn’t) but Big Sur doesn’t like that.”

Which folder, the application support folder?

He didn’t say, though the problem folder was the Application Support folder, Lightwright couldn’t create folders inside it.