Why: because this error is deep inside of web 1.0 API and to correct it you need a new API. That’s why they startet 2.0

I understand you. But I am stubborn :-). Perhaps one can not solve the error itself, but I understood you as such that the app is working in principle. As I am stubborn, I would never give up in asking questions before I’ll move on to one of the alternatives you are mentioning. But I sincerely believe that you might end up in a dead road somewhere with different tools :-(.

But implicitly you are supporting Xojo’s decision to rewrite the whole stack. This is inconvenient for all of us, but definitely for themselves as well. Would Web 2.0 have been the right choice from the beginning? Yes. Was it possible at that time? Nope …

I can only say that I would always try everything to find a workaround for your current problem (even if it will be an “ugly” one) before starting from scratch … But I can’t help you on this, you should pick it up with Xojo or obviously move on :-(.

You are certainly right. It is unlikely that the constantly growing wishes and requirements of customers in their diversity can be covered by the capacities of a single tool. Xojo makes no exception, although it is also for me a very strong and powerful alternative. Originally I started with VB.Net and VBA, and most of the developments were primarily in the area of office automation - that’s why Xojo became interesting for me. In the meantime - after it is known that Redmond will not put any more efforts into the further development of the VB language core, I have become aware of initiatives like the one of “Remobjects”, which with their “VB++” alternative (code word: “Mercury”) aim at the development of a multiplatform capability of VB. Such developments give courage for the future of the “Basic” descendants.

Sorry but thats not what I ment. We are developing with java and b4x, the xojo Webapps I will have to rewrite and thats ist. I have similar Apps written with b4x without Problems like this

In this instance, I would recommend that you write your Canvas using our JavaScript that runs in the browser. Sending Mouse events over the internet is kinda crazy just to draw some lines.

This is not the same position I hold for a WebLabel which acts as a link that preforms some significant yet not rapidly consecutive task like take a user to another part of the app or commit changes to a database.

Web 2.0 is too immature to replace Web 1.0 and cannot be considered an upgrade to it yet.

We can work around the bugs in 2019r3x but not the IDE which goes slooooooow on Linux every half hour and needs a restart. Cut and paste not working properly on Ubuntu (but other apps have problems too). But if Windows cut and paste has probs then the problem could be the IDE.

And So we need back port fixes to 2019r32 IDE please. And Xojo Inc. needs to run up some VMs on their Mac i8s to dog food Linux IDE.

I am currently using 2019r3 while I await more Web 2 features.

Our code uses mouse coordinates too.

And that we do not have in case of the jscript errormessages.

Alot of rant and still not a clue of what errormessages are you talking about. Do you have a sample? A feedback case? At least the text of the message? 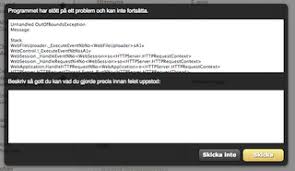 Message like this in different message contents within the same App.

The Text inside variier in the same app from time to time. All apps are Not containing javascript, all Open and all shown Events are clean. The errormessages are totally different. This is known since 2016 and Never Vorrechtes. Users where asking for a production mode where this messages can be disabled. And before questions are Starting: yes all error Catcher are working Proper.

It’s in development. Getting 2020r1 was the priority but we do plan to finish the web-based version of Feedback. We very much wish to migrate bug reporting and feature requests to the web.

To be honest @Thorsten_Stueker, using Xojo WE for graphical stuff was a bad decision from the beginning on. It was never, either with or without bugs, a good environment to build webapplications with a high load of graphics.

Or, you have to implement your own controls, what we did, everytime the build-in controls didn’t gave us what we wanted, like stability.

additionally: you can simply prevent that the dialogs are visible in your app with just a few lines of css code.
If the errors don’t stop your app, then you can just ignore them and turn them invisible.

The Bad decision was to write about HERE. First: Not a high load of graphic. Simple Stufe. And no: ignoring is impossible. I am not byself the User and the Users will Not ignore

Sigh… stop ranting. Seriously. Do you think anyone can remember a discussion from 2016???

You didn’t do any beta testing. You could have had a sensible discussion months ago.

And now you only do ranting. You didn’t even answer my questions.

Sorry for ranting. We have done beta testing. We have this Problem cause of an internal error of xojo witch is coming up from time to time cause App realises an out of sync but it is not out of sync, xojo generates in this moment outside of all error catches an error message. Thats it. And I am ranting because of the fact that there will not be any chance for Updates of 2019r3.2 or 3.x. However, this makes a problem cause I cannot rewrite to Web 2.0 cause it is not ready for use, it is Beta state. We have done testings for the 2.0 but there is one big Problem. The customer is marking in our Webapp the Position of sensor electrodes on a Picture. This works only with Mouse events. There are no mouse events in Web 2.0 at all at the moment. That because the Web2.0 API has no ability at the moment for Mouse events (also not own defined events). So: I have no chance to rewrite in 2.0, no chance for an Update of 2019rx and so I am hangin between Web 1.0 und Web2.0 until…yes, unwil when. And when you wrote about an error like this for long time and sending mails to xojo also for a long time, your mind is getting powered and your bloodpressure climbs. Me and my customers (all of them are manufacturers of medical devices) are paying maintenance and nothing happens for years and after all of this the company decides to stop all developments. For me to mouch for one weekend.

And I had Mail conversation with xojo for long time. Nothing happens. And yes, we have done beta testing with our App. We rewrote the App on this weekend with Java. Runs. Ending for me. And ending for Xojo with my customers. Only way to show whats wrong is not to pay for this. Isn’t it? I mean what shall this be? Not even bakon Solution as Major Release? So, before you teach in that I should have made beta testing let me tell you: the Beta testing was not showing the error, even in usability study there was never this error. But if devices in use thousands of times per day than you get this errors. And if the error is not really an error because it is only showing the error message but app behind isworking correctly you may have a problem. And there is no way out of this message cause: there is no catchable error. As Website I could communicate but not as medical app.

Read WHAT? WHAT BUG??? No one is going to read your mind or guess what that mistical 2016 bug is.