Even with casual use I just found 3 bugs in Feedback:

And the update is mandatory so there is no going back.

For anyone else interested, the file download problem is case 64793 - sorry about the terrible title but it was what Feedback auto generated and I don’t see a way to change it.

The colour of the selected row is almost the same as the background.

A JDonwload 2 developer was hired ?

and btw, the list with case on the left is filled one by one and took very long.
i can see how the list is build. and it was same slow in previous version.

Even with casual use I just found 3 bugs in Feedback:

• It’s not possible to download any file because Feedback crashes.

• The colour of the selected row is almost the same as the background.

This is for the leftmost list. The right one is right (pun intended) and uses the user’s highlight selected colour.

• Preview of attachments is screwed up in more than one way.

One other behaviour I got (in the beginning of testing the ones you mentioned) is when I clicked on “Recently Active” (the list where I wanted to try, hoping to find attachments), a new tab opened in Safari, with an address starting with “documentation.xojo.com”; I didn’t let it finish loading. Feedback was showing “Loading…” and stuck there, until I finally went in another section.

Expected Result:
For non-picture attachments show that there is no preview available.

Ha, got another one. Even the Feedback version is wrong.

Oh, now I get it. When you go from a picture to a non-picture attachment, the picture stays in view (instead of the newly selected item). Confirmed here.

Ha, got another one. Even the Feedback version is wrong.

Don’t show such a big smiley

. When the page loaded, it’s the first thing I saw; I first though you were angry against my answer

A good thing, with previous version Feedback crashed on launch if Xojo wasn’t running (on Windows). Now I can launch FeedBack without launch Xojo previously.
The problem didn’t appear on Mac.

I just test on Windows, FeedBack crash when I click “Save” to save an attachment.

I see the selected row, even if the grey is not very different.

I guess what item is selected in the left list, because the selected color is near white and the contrast is very low.

Also, navigating in that list with the arrow keys launched by default browser on itself…

List on the right ? I do not have one…

Just for fun, I typed n the Subject line:

I get a ton of entries (Closed and not Closed).

I clickedin in Create and the Case type does not shows Bug (easy to do). This kind of assistance is welcome.

If you want to delete all entries in CASE, you have to right-click nth times…

List on the right? I do not have one…

It’s there when you select a section such as “Newest” or “Recently Active”.

Also, navigating in that list with the arrow keys launched by default browser on itself…

Not only with the keyboard.

Do you really want to know?

I deleted my answer because, really, what’s the point …

The five stages of grief are:

Don’t show such a big smiley

I don’t know why I make such big smilies…

I cant even see anything in the left pane, can only search for cases
Win 10 64 bit 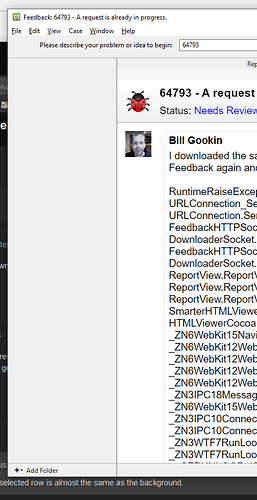 . I’m referring to the overall loading time. I don’t see a change there but that’s my biggest challenge with the FeedbackApp, it is so slow to load and to search for anything a nightmare, that it is really no fun to use it, and one of the reasons I’m creating cases only when I can’t find any alternative.

I acknowledge that such systems are by definition big monsters with tons of tables and data, but I’m still surprised by the performance on the initial load. Most stuff is text-based for the search and even with millions of entries and let’s say 100 concurrent users (which is most likely not the case) this should be easy for any Postgres db for instance. Especially as I assume the feedback case number to be a unique ID and the primary key. A search for a given Feedback Case ID takes at least a minute on my systems, and that doesn’t look “normal”. On the other hand, I don’t think Xojo engineers need a helping hand in designing their databases, so there must be something I do overlook.

The answer is: we do. On Mac, the search/toolbar doesn’t even match the titlebar. The tab issue could have been fixed with a simple declare, and the new icon just screams “I’ve given up.”

It’s clear focus is entirely on the web version.

It’s clear focus is entirely on the web version.

It’s not about focus, it’s about standards and workmanship.

It’s not possible to download any file because Feedback crashes.

It also crashes on Windows:

Who tests Feedback? The same team that test every buggy release of Xojo

• Preview of attachments is screwed up in more than one way.

The colour of the selected row is almost the same as the background.