Im testing some webapp interaction - basically @Greg_O_Lone 's web service examples where one app does a HandleURL and the client sends a GET to 127.0.0.1:8080/endpoint.
I am getting 2 strange things; On Mac, the Request.Path is not showing up in the recieving app’s HandleURL request but it is seemingly valid, and then I have to refresh the recieving app’s page for the event to fire into the debugger. The recieving app’s port is 8080 and the sending app’s is 47932. On Win, I can open either one of the apps and debug but the second always chokes and gives the below message - doesnt matter which one I open first, it works and the second opened one wont 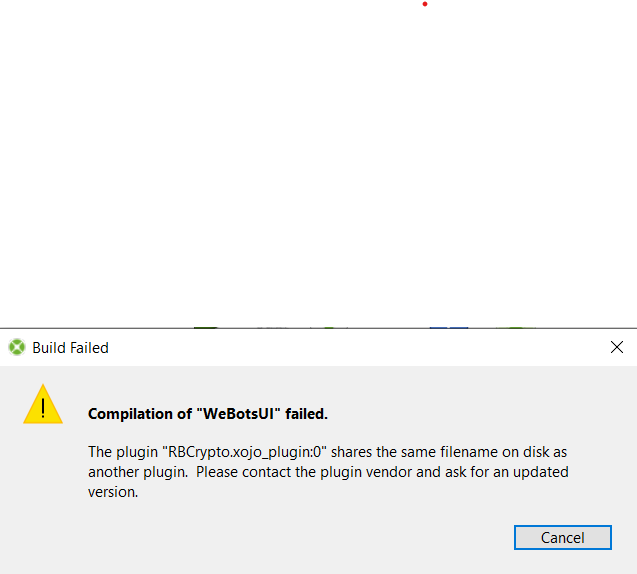 I’ve seen a similar compile error when trying to run more than one application simultaneously in the IDE. Two workarounds:

I’ve also seen this when running a project from a shared folder such as Dropbox, OneDrive, or iCloud, but it is likely because you’re running two projects that are trying to build to the same location for debug (as @Eric_Bloom said).

@Greg_O_Lone has a video (https://youtu.be/vCGNB94y0DU) out showing this working - debugging two applications at once. The video seems to be Web1.0 so maybe this doesnt work with web2? Its kind of hard to debug HandleURL. The problem with building one is it calls the other and they are both localhost. Both applications are in their own folder and so both have their own debug folder so thats not it. I guess I will send it calls from postman or thunderclient…hmmph!

A couple of things:

In Web1.0 you had to set a port that the debug app would run on. Is that still a thing on Web2? I no longer have access. If it is you need to set both to different ports.

@Paul_Lefebvre - sorry, Paul’s nice video! yes, as I said above they are on different ports and live in different folders.

And heres the even stranger thing - On Mac I can debug both at the same time but, the Request.Path is not showing up in the recieving app’s HandleURL request but it is seemingly valid, and then I have to refresh the recieving app’s page for the event to fire into the debugger. It works as expected sending a GET from thunderclient in VScode…but I cant send a session ID etc nor test the commo…grrrr!

so I do see the Request.path in the example app, “API Sample” HandleURL event so Im not sure what I have wrong in my code. It works with the example so