I’m having a problem with a ToolBarButton (Xojo 2019r3.1, Windows 10). One of the buttons is a style DropDownMenu, defined in the design of the ToolBar rather than added at the Open Event. It appears in the IDE properly, with the arrow indicator and icon as defined. The name of the button is ‘OtherButton’ and I’m trying to add the menu to it in the ToolBar’s Open event.

My reading seems that it doesn’t recognise the OtherButton as a DropDownMenu style even though it has been defined that way. 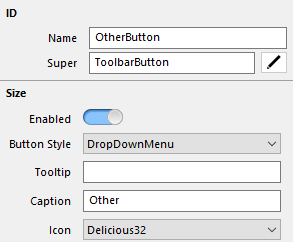 Am I doing something wrong or did I miss a step?

Yeah, it took me a while to figure that out. My corrected code it

which works properly. One thing that threw me off is that ‘Menu’ is not in the autocomplete list. So when I typed

and hit TAB, ‘Menu’ was not listed among the possible choices.