Can anyone tell me what

returns when used in a 32bit Windows build running on Windows ARM?

I think it returns something like “virtual cpu” the last time I looked on it.

I thought TargetWindows 64bit wouldnt run on an ARM machine?

Depends. There are four possible combinations: x86, x86_64/x64, arm, and arm64. So it’s possible for TargetARM and Target64Bit to both be true. Remember that those are compile-time constants that will tell you how your code is running, not necessarily anything about the hardware or operating system.

To nobody’s surprise, Christian is correct about the brand string. Running an x86 version on Windows 11 ARM 64bit in Parallels gives me Virtual CPU @ 3.20GHz. I don’t have true ARM hardware to test with.

Well, I can build 32-bit Intel and 64-bit Intel apps with Xojo and run them both on Windows 11 in emulation on a MacBook M1.

Microsoft does have a 64-bit Intel emulation layer. 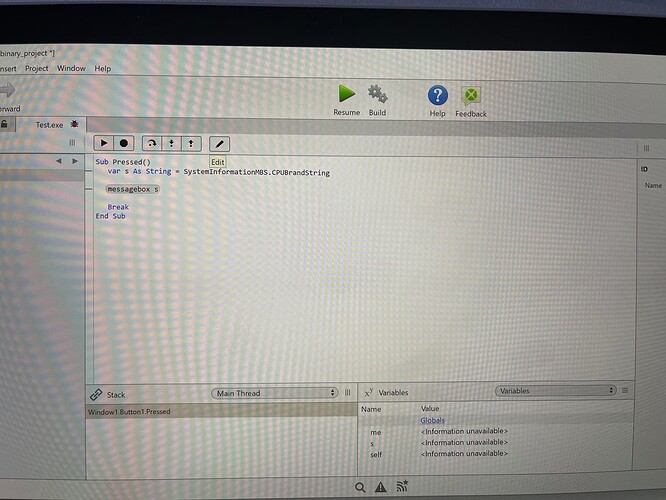 @Valdemar_De_SOUSA I would suggest using a too to do screen shots. The r3esult is much better than using a camera.

This is information. Thank you.

I wasn’t surprised to see the reports of ‘Virtual’ processors.
I wanted to know how many of my users are using actual ARM machines/Windows ARM like the Surface.
I ship as 32bit and so they should run anyway, but I’d like a handle on how many users are running my stuff on real ARM devices.
Most of us here will be trying this in a virtual machine…