Suitability of using 32in or 43in 4K monitors for development?

Can anyone share their experience of using larger 32 in or 43 in 4K monitors for development and general computing?

Are they too big?

Am I better off with two monitors? etc.

Note though, some people at work returned their 40 inch since because glasses they had then with split glass in it they found it hard to use the 40. So not all like it that’s for sure.

can’t the user lower the resolution in the 40" monitor??

Yes of course you can, problem for them was somehow the area they had to focus on which made it difficult for them to look in correct spot in the glasses.

In all fairness then those people maybe also panicked and just did not give it enough chance. Its very different how you use 40 inch screen vs 24 inch.

Note the pricing is in Australia dollars but I was thinking this 43" Smart Monitor M7 UHD | Samsung Australia .

what is this split glasses you are referring to???

I dont know the english word, its glasses where you look at them in different spots and get different lenses. Like if your both near and far sighted.

I think my spec is varifocal… don’t have the line…

And the TV’s energy savings compared to the 27 inch “energy saver” would actually pay for the TV within a year. I’ll never look back. For my purposes, the 40" is better in every way. I often treat is as two side by side 1920 x 2160 monitors with zero bezel between them. And have hotkeys assigned to via Better Touch Tool to instantly move / resize a window to various areas of my 3840x2160 workspace. Less total pixel width than my previous dual 2560 width, but for development purposes I prefer the 50% greater height because I can see so more more at once vertically by the time you lose some top area to toolbars, lower area to search / debug panes, etc. And there is still plenty of horizontal width to show all the windows and floating palettes I want.

At the time I went with 40" instead of 43" even though they were very nearly the same price, because the 40" worked out to nearly exactly the same pixels per inch as my previous 27" monitors. A 50" was barely more money too, but would require more head movement to take in, and I calculated that at my viewing distance, I would be better off with the 40". It’s been great.

I can see where needing bifocals or split glasses or whatever you want to call them could present a serious impediment. So YMMV. But I absolutely love it.

When traveling, I now use a 16" MBP with dual 4k external 15.6" monitors, but all
running a lower resolution than 4k because my aging eyes cannot comfortably read at a 4k resolution anymore. I will second the recommendation for SwitchResX to gain more control over available resolutions, and setup multiple display groups you can hop between via hot keys. Great for resizing for different configurations to see what a window would look like at various user resolutions.

I use my 70 inch 4k TV as one monitor and then I have an Asus zenbook Duo with two monitors on that laptop and I frequently use all three for coding.

I usually have two xojo windows at least opened on the TV and then the docs on one of the laptops monitor and the forums opened on the other, along with maybe some coding music and maybe task manager.

What I’m mainly focusing on is on the iMac , with the others having additional Xojo Windows or reference material., language ref etc.

we have 2 LG monitor that has speaker, height-adjustable and tiltable, with HDR but don’t know how to find out about IPS or VA or TN… very good monitor.

its more interesting for gaming or designer, or just because you like colors. 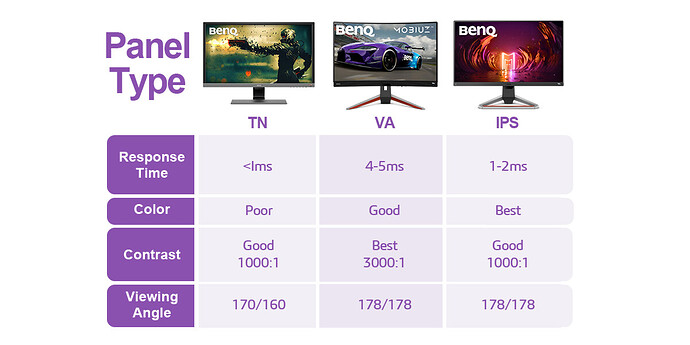 How to Choose Between TN, VA, and IPS Panels for the Games You Play

Choosing between TN, VA, and IPS panel types often confuses lots of people. Each has advantages for particular uses, so let’s take a look the differences in speed, colour, contrast, and more.