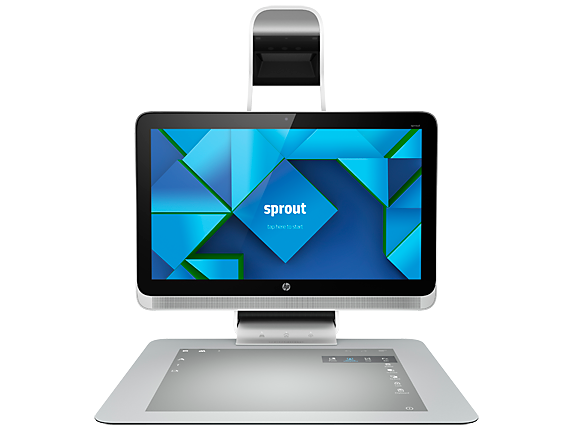 Probably will get the normal WTFs bacause it has no fruit logo on it, but what a great looking machine! Just remember this one when Apple brings out its next ‘innovation’ in a couple of years…

I thought this was a joke, but at least the website exists. They still don’t have any designer worth his name. The touch screen is an invitation for muscle cramps. And the name is the bestest ever. Reminds me of http://www.amazon.de/Sprouts-Wrath-Brentford-Trilogy-English-ebook/dp/B007QDCF16/ref=sr_1_1?ie=UTF8&qid=1414649453&sr=8-1&keywords=sprouts+of+wrath .

Ugly as hell. And I fail to see the “innovation” there

Lol, wasn’t expecting any other reaction from this forum. Indeed touch for the desktop does not work on a standing-up screen, so hence the laying down platform. Grab it from the screen and work on it on the platform. With the build-in 3D camera and manipulation by gestures, it looks very nice for creative people to me. But what do I know,…

A little know fact is that HP was the first to really believe in touch screen technology, back in the 1980’s. I remember how then they touted that as a replacement for the mouse. On cathodic screens, and for whatever reason with a non-glossy surface, it never convinced the public. But that was probably the ancestor of all the touchy thingies people walk around with at the risk to bump into street signs and light poles.

Instead of resistive or capacitive technology, it used an infrared grid so it was adaptable to any screen or surface, and creme de la creme, that was produced by HP France.

I find this new computer concept quite interesting. Anybody who has worked in publishing or design knows about repro stands, and having one always ready is a major innovation. Notwithstanding the designer taste of the thing or the dubious utility of a virtual keyboard on a desktop machine, there are extremely promising ideas there. Of course, this will largely evade anybody who never had any serious graphic design need. Or any serious case of Applemania.

About the name, though, it’s amazing how sometimes the biggest companies seem to have no brains. Sprout ? Why not fart ?

You really are the Wiki of this forum @Michel Bujardet ! Love learning these facts.

About the name, though, it’s amazing how sometimes the biggest companies seem to have no brains. Sprout ?

Maybe it’s because I’m from Belgium I don’t find it such a bad name :). Brussels sprouts with roasted pig and roast patatoes, mmm

[quote=139776:@Alain Bailleul]You really are the Wiki of this forum @Michel Bujardet ! Love learning these facts.

Maybe it’s because I’m from Belgium I don’t find it such a bad name :). Brussels sprouts with roasted pig and roast patatoes, mmm[/quote]

Although I lived in Brussels, and do appreciate it’s traditional cuisine

Or any serious case of Applemania.

Can you maybe stop with your constant putting down of Mac users? It’s annoying.

Looks pretty cool to me.

It’s annoying and getting to the point I rarely come here any more.

Can you maybe stop with your constant putting down of Mac users? It’s annoying.

I am one of the Apple vaccinated ones since 1982 BTW. Maybe you are younger in the faith, and therefore more fanaticized. You know Markus, it is not necessary to pick a fight to be relevant.

Your recent pitiful behavior with Brad should engage you to be a tad more composed.

Your recent pitiful behavior with Brad should engage you to be a tad more composed.

i think you might be mixing things up. Feel free to take this private.

It’s intriguing. But I don’t see any advantage. There is something awesome about the concept of a touch screen iMac laying on the desk at a slight angel. But practically, it’s terrible for more than 2 minutes of use at a time. I see similar problems with this design. I think it would be more practical with a true keyboard, where you could be typing and simply lift your fingers enough to perform a gesture. That way you’re not actually lifting your arms.

This is a step towards something revolutionary, but it’s just not there yet. Of course, I haven’t used one yet.

The touch screen is an invitation for muscle cramps.

Five different ways to work with Windows based software. I’m not sure I want to add a fake touchscreen to the list - especially one that uses a projector?

I agree with touching on a monitor being painfull (have had one myself a couple of years ago, never used the touch functionality). That’s why I think the touch platform laying flat could be a solution for those painfull arms. Although a ‘real’ keyboard will always be better, especially for programming

The 3D camera/Gesture thingy is something I definitely would like to have my hands on. The child in me wants to play with it, and the programmer in me wants to develop cool stuff with it.

I do not think the Sprout is anything of general use. It is far too cumbersome. And indeed a large vertical touch screen is not a very good idea.

But it is probably the best digital repro stand I can think of for the production of digitized material.

Here is what a lot of printers and creation studios are still using today : @Michel Bujardet Well, although looking impressive, that second one is not something I would show-off in my living room.

@Michel Bujardet Well, although looking impressive, that second one is not something I would show-off in my living room.

Some people do buy Hummers

Yet, that is exactly the kind of equipment Sprout replaces. You would be amazed by the backwardness of the whole printing industry in that particular field. Actually, still today, repro stands are the very same technology used since the beginning of photography, only fitted with digital cameras.

The most common is the first one, used by professionals and amateurs alike, basically an enlarger column with an attachment for a camera. But professionals do use the kind of dinosaur on the second picture. I think the Sprout fits in between. One step above the stand, but not yet as elaborate as the second one.

I can see where a keyboard monkey would hate it but my first impression was about how cool it was. If you had to spend most of the time touching the screen that would be an issue but it looks like it is designed that most of the touches are on the desk mat.

If I had the spare funds I would get one in an instant for my daughter who has grown up with touchscreen everything and this would be perfectly natural to her.