Upon completing testing and building on my desktop (iMac), I tried my bridge-scoring application on my wife’s MacBook Pro, and it worked just fine.

However – on the MacBook only – the top left radio button appears to have a blue “selected” circle around it. This circle stays there throughout operation, even if I quit and restart the application.

Is there something I neglected to initialize?

(trying to show screenshot at https://imgur.com/951Wftb ; not sure why it doesn’t show) 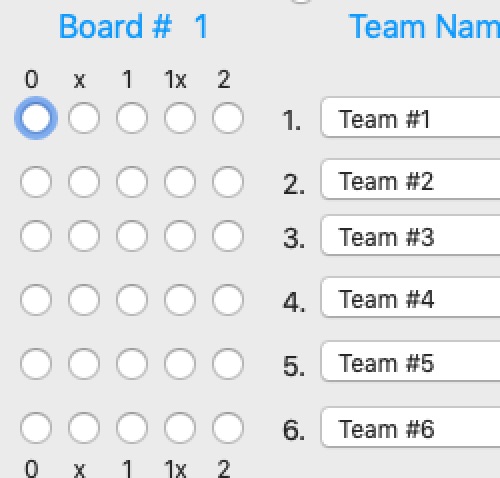 Looks like you enabled keyboard access on that machine. If you type right arrow, or tab, the focus ring should go to the next button, and if you type Enter, it should press it.

I have a temporary solution, but I do not know a definitive answer (Try my solution with Catalina, who jnows):

In the System Preferences (hope this is the correct US name), select the Keyboard control panel, then click in the Short cuts Tab (the third Tab) and press in the Fields and Lists (the top one) RadioButton.

This will disable the Tab navigation on Controls, but this is reverted on the next reboot.

PS: because I know how to activate this bug, I tested it on my nearby Apple Store, reboot the mac I tested that and discovered that this works differently. I asked an employee (without explanation) and he told me that the machines OS are freezed (whatever that means).

that button has focus so you get a focus ring

you could, at the very end of the Windows.Open event just put “clearfocus”

Michele wrote - [quote]If you type right arrow, or tab, the focus ring should go to the next button, and if you type Enter, it should press it.[/quote]Well, the right arrow didn’t advance the focus ring, but Tab did. However, I don’t want the focus ring at all; also, Tabbing and Entering would be a horrible way (at least in this case) to use radio buttons. I don’t think users would discover that odd entry procedure on their own, but in any case, I don’t want them to have to deal with this display anomaly (“focus ring”, I now see that it’s called).

Likewise Emile, it’s good to know how I can disable this kind of navigation (and presumably, the focus ring) temporarily, but this is not something a user should have to fuss with.

Norman – Yes, I do indeed want nothing in the window to have focus. Therefore, ClearFocus is apparently going to be the answer, because when I put it as the last step in any number of Methods called during the program, the focus ring disappears when that method is called. Strangely, though, when I put it at the very end of the Windows.Open event, it has no effect – the ring stays there until either a chunk of the scoring is completed or a previous scoreboard’s Saved data is loaded (both of which events are places that I’ve added the ClearFocus statement).

So at this point, if the user ignores the focus ring and begins entering scores, the ring will eventually be cleared. So far, though, I can’t get it to clear at program load/startup. I’ll keep trying to find the magic spot to add ClearFocus that will solve that issue.

Thanks to all for the quick and helpful responses and suggestions!

Would a segmented control work for you here?

I don’t know; obviously I have to learn more stuff.
Fact is, this program works just fine on my desktop. It’s only on the MacBook that the focus ring shows up – and aside from that, it works fine there, too.
Do segmented controls not show focus? Is that why you think a segmented control might help?

Likewise Emile, it’s good to know how I can disable this kind of navigation (and presumably, the focus ring) temporarily, but this is not something a user should have to fuss with.

Put the blame on Apple.

This is a per machine bug (some may tell feature). So, some have it, some do not have it.

Xojo is not involved in that. Press Cmd-Power (to shut off the MacBook) and look on the dialog: the focus ring appear there too.

This is a per machine bug (some may tell feature). So, some have it, some do not have it.[/quote]
This is absolute nonsense. It’s a user setting.

[quote=461616:@Robert Leedom]However – on the MacBook only – the top left radio button appears to have a blue “selected” circle around it. This circle stays there throughout operation, even if I quit and restart the application.
[/quote]
On the MacBook, go to System Preferences > Keyboard > Shortcuts and ensure that Full Keyboard Access at the bottom is set to Text boxes and lists only. On Catalina, this has been renamed to “Use keyboard navigation to move focus between controls”, so ensure that is not checked.

It’s possible to turn this setting on and off with a keyboard shortcut so it’s likely that it has been accidentally switched on on the MacBook. 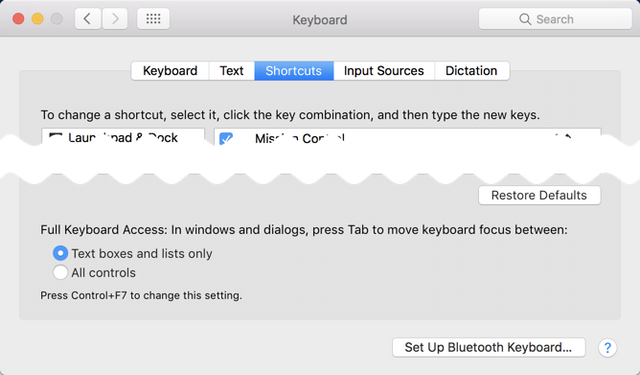 Yes, on my machine with Control+F7 you can change the option.

Yes, the MacBook had the Full Keyboard Access set to “All controls”, and changing this to “Text boxes and lists only” removed the focus circle – but not until the next startup of my program. (Had to do this by clicking in Shortcuts; Control+F7 had no effect.)

I tested this “fix” and it turns out that this setting does not reset upon reboot, and is therefore not “temporary”, as Emile thought it would be. A do-it-once setting change is much more palatable to me.

I suppose I’ll consider the problem solved, because if users question the “blue ring”, I can tell them how to reset it – or point out that it will go away (e.g., after one set of scores is entered). Still, though, seems I just need to find the one special place to insert ClearFocus…

As an app developer, you cannot anticipate what a user may set.

If he wants full keyboard access, your app should enable it.

In this specific case, however, all of us who are members of our six-couple duplicate bridge club are point-and-clickers. None of us would enter our board scores by tab-and-enter – it would take too long. In fact, we always let whoever’s fastest be the one who puts in the scores.

Thanks again for your help.

I waited some days to make this report: Ctrl-F7 works temporarily here. After a reboot the unwanted feature (subject of this thread, but not Xojo related) comes back.

And no, it is not nonsense (from me).