Property in Module isn't seen on other windows

The property gets its value from a selected row in a Listbox/name column and it remembers it correctly as long as it stays on the Window where the value is set, but not on all the other windows, even though the property is part of a Module. Shouldn’t it be remembered throughout the full app?

Ensure that the scope of the property is Global.

So the property should ONLY be declared in the Module to be available though the app you mean? This is what I have.

Good. Now you need to consider the sequence of events that determine when the label text values are set and make sure they happen after the first window sets the property. In particular, in which event do you set the label text value in the second window?

It would be a good idea to set a break point in the event where you set the label text value in the second window and examine the module’s property value.

If ‘the other windows’ are created once (implicit instantiation)
then the open event only happens once
So if you set the label in the open event, any changes wont be seen.
Set the label text in the activate event if it is not already there.

But I didn’t know that I should only have the property declared once in the Module AND I found it being declared again As String on another spot, so maybe it was set to empty again there as well. Thanks for your help, Tim!

So the problem was scope. The closer scope is the one that is used.

The precedence is
Method/Event
Window
Module

The compiler allows same named variables/properties, but sets the one that is closest in scope. The rest remain unchanged.

I was able to solve the label problem, but now I have a similar problem when trying to read the Database Columns into Textfields which are placed inside a Container which is placed on a Second window. I am trying to solve this since 3 days and with all kind of possible paths, but I keep on getting a NilObjectException, so it’s looking for something that doesn’t exist. I am using the same path as when Updating info from the textfield to the DB which works great. However I am not able to get that db Data being SELECTED back into the Textfields.

However it gives me a NilObjectException on the whole line.

ActionAntagonistQuestions is a Global property which is placed in a Module.

anywhere, so I imagine rs is Nil. Have you checked that in the debugger?

Sorry, that was above the code, this is the complete script:

It’s only this line that gives the error: NilObjectException

Then you need to check each thing that could be Nil to see which it is. You have an exception so you drop into the debugger. So check each of these:

to see which it is.

Thanks. It is the Window, ActionAntagonistQuestions (which is in the Module as a Global property), that cannot be reached and is Nil. How do I solve this kind of nil problem? Shouldn’t it be seeing throughout the app because it’s in a Module? I checked if this property maybe was changed somewhere else, but it isn’t.

Perhaps you’re not setting it even though you might think you are. The program compiles, so evidently it looks like the compiler sees it OK. You’re not re-using that name are you?

No, I checked all over with the search field in the debugger. Unless this is seen as a replacement?

I added a message box check:

which gives me this: 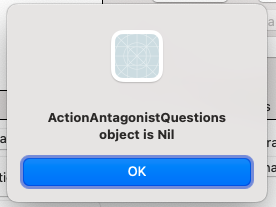 Yes, the window itself is named WinAntagonistActionAntagonistQuestions

Is that window your main window?
Are you sure that window opening event fired before you try to use ActionAntagonistQuestions?