Feedback case 57120 was archived. I had requested reopening on 13th of January. The case still hasn’t been reopened.

The behaviour happens EVERY TIME I edit code in Xojo. It’s really not hard to reproduce.

Today I edited one single class. The result is that 31 classes have been changed: 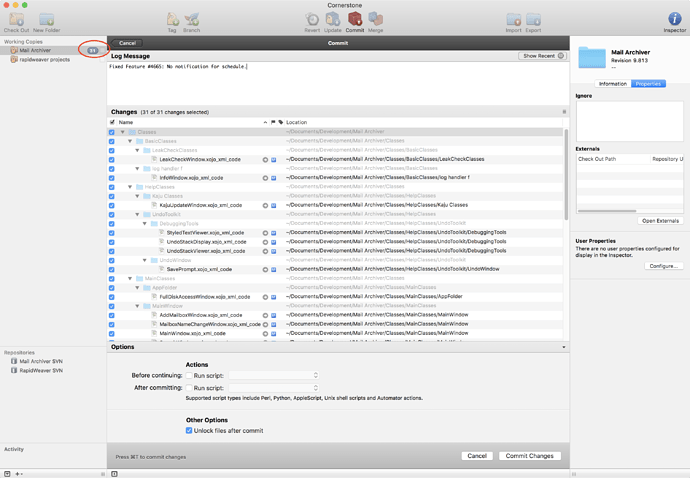 Perhaps your project is saved with a newer Xojo-Version than before?
So there is an update to the way Xojo changes something.
You should have a look to the diffs, but I think this is not a bug.
You should do two chechins. The first with the version changes. Than make the changes to your class and check them in second

Yes, this is a bug and it happens all the time. No, not going to do a diff again. No, no using a different Xojo version. The bug has been reported multiple times for text format and I’m using xml.

I moved some lines out of an if/then/else. No other code should be affected in the screenshot above.

For what should I do 2 checkins?

For what should I do 2 checkins?

To have “clean” checkins, on for the change one for the ide-internal changes

To have “clean” checkins, on for the change one for the ide-internal changes

I don’t have time for that. I just want to have the bug fixed.

I’ve been very vocal about this bug, but 2021r3 is way better in this regard. It’s not perfect, but so much better that it’s almost a non-issue. I have to agree that a fresh re-save is likely the solution, with version control, that would just be a Save As over the existing project. But XML, I’m not certain. It might be the same, but it’s not a format I ever use.

What’s the point of asking here since it should be done in Feedback?

Feedback case 57120 was archived. I had requested reopening on 13th of January. The case still hasn’t been reopened.

Maybe. I personally think it’s a waste of time to ask in the forum. If Xojo hasn’t yet reopened the case, even if it’s an important one, nothing will force them to do that.
Xojo teaches patience

Maybe. I personally think it’s a waste of time to ask in the forum

Maybe. But that’s what this category is for. Otherwise, I’ll just do another Feedback case which probably will also rot.

@Thom_McGrath : I’ve only used 2021r3.1 for testing of API2. But I haven’t noticed any improvement. I’ll need to do more testing.

But that’s what this category is for.

Ah, ok. I thought otherwise but your explanation stands better than the one I had.

I checked on this one and this case is in the process of being reviewed for re-opening. Cases to be re-opened going through an internal review process, they are not just automatically re-opened, and some take longer than others to go through this process.