I’m trying to run an old PowerPC Mac app in a Parallels VM on a modern Intel Mac. I have OSX 10.6 running in the VM. I got the installer for 10.6 from Apple’s developer download section. On 10.6, Rosetta (needed to run PowerPC apps) isn’t installed by default. Rosetta is supposed to download automatically when you first run a PowerPC app but time has been cruel and Apple have clearly pulled the hosted version of Rosetta. Apparently the Rosetta app is on the actual 10.6 install disc (under “Optional Installs”) but I don’t have the install discs. Does anyone have the Rosetta binary they can PM me? Seems bizarre that you can legitimately download 10.6 from Apple as a developer but you can’t get Rosetta.

Before you ask, I tried downloading 10.5 from Apple (a success). Whilst that does contain Rosetta, you can’t install 10.5 in Parallels (at least not in my up-to-date version of Parallels).

I have this disk, at home. I can send it to you in a few hours.

the installer links to a lot of hidden files and it’s better to have all the required !

Apple had a time limited licence for Rosetta (1), you will not be able to get it to work

That’s very kind of you Jean-Yves. Like Christian says so you want to zip the optional install folder and put it in the cloud somewhere? Like dropbox? You cold potential just clone the disk as a DMG and upload it. Otherwise PM me and we can sort out something else.

Apple had a time limited licence for Rosetta (1), you will not be able to get it to work

Are you sure? I thought Apple wrote Rosetta.

well it is available on the net 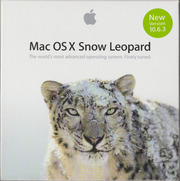 Installation DVD for Mac OS X Snow Leopard. ISO for Boot Camp and DMG for installing on a Mac. Both files were created in Windows 10 and are untested because I...

Before you ask, I tried downloading 10.5 from Apple (a success). Whilst that does contain Rosetta, you can’t install 10.5 in Parallels (at least not in my up-to-date version of Parallels).

All Mac OS versions prior to 10.7 were not legally installable as virtual machines, so Parallels Desktop would prevent installing them. How did you manage to install 10.6?
(I actually tried several times along the last 10 years and every attempt led to either Parallels refusing to start the VM or the VM crashing)

IIRC, Apple allowed Snow Leopard Server (back when they had server versions) to run in a VM. I got that working in VMware Fusion a long time ago. Alas, I just dug up that VM and it will no longer boot in Fusion 11.

You’re right; even 10.4 and 10.5 servers were allowed. The were expensive, also, and I didn’t want to purchase them just for a VM.
Can they be downloaded these days?

I also have not been able to install 10.6 in a VM, but ok with 10.6 server.
also it seems it doesn’t work with virtualbox. ( I did not succeed even if the option is available in the list of possible virtual machines)

Can they be downloaded these days?

I was able to make Snow Leopard Server work in VirtualBox a couple of years ago, but it didn’t seem to handle USB tranparently and it was unable to drive my slide scanner.

Yes, the server version definitively should be supported as a VM, as it’s legal (the key fact for something to be supported…).
In our case (Jean-Yves and me), we were referring to the non-server version, since Garry said he could have installed it as a VM (which stills seems odd).