No way around using a Mac to develop for Mac

for those who haven’t read todays blog from @Geoff_Perlman, see Why building apps for macOS requires a Mac – Xojo Blog

Because of some of Apple’s recent decisions, it is no longer possible to build Xojo projects for Mac from Windows or Linux.

I thought people with llvm were working on creating 64bit apps on Windows/Linux. What the hell happens now regarding Apple ?

Compiling isn’t the only issue.

Apple could care less about the problems it creates with each new decision on their operating systems. Although I am using Catalina, because I have to on my 16" MacBook Pro, all my other computers will stay using Mojave. To drop 32bit support was a very poor decision that borders on rank arrogance and a lack of concern for their users and their software needs. I love using Macs, but I hate Apple for their lack of support for the average user.

I suspect that Apple has excellent data on the demographics of their ecosystem and knows that they can make these changes knowing that the negative impact will be minimal. It makes life more difficult for developers of course but developers in Apple’s eyes have always be in a distant second place to customers. We may not like it but it’s worked well for Apple. What I mean by that is there customer satisfaction scores are extremely high.

Apple have always been as arrogant as hell but, as Geoff points out, their customer satisfaction scores are very, very good. They expect their developers to meet their(Apple’s) standards to ensure the UX is as good as it can be. You have to ask yourself how many hoops you want to jump through for such a small portion of the market but, if Mac users are part of your demographic, you have no choice.

My Mojave VM serves as my museum for some of my favorite 32-bit apps. I keep them for reasons more sentimental than necessary. But we hardly should have been blindsided by the move. This has been coming for the better part of a decade. Now, some of these companies have gone out of business, and some independent developers have sadly left this mortal coil. However, I believe there are a lot of cases where the user cares more about the app than the developer does.

That’s like saying it is arrogant on Apple’s part to drop the keyboard on their phones.

Macs have run 64bit apps since MacOS 10.4 Tiger in 2004, the move to 64bit only was announced long ago, so yes, there is arrogance, but it is not on Apple’s part

With all due respect, Markus, Apple’s decision to drop 32-bit support is a major flaw. True they announced it, but thats like giving a serial killer a light sentence because he announced his intentions beforehand. I have $400 worth of Adobe software I cannot run because it is all 32-bit. And I cannot afford to get the new Adobe software because it requires an annual and outrageous subscription. Feel free to call Adobe arrogant and I will join in.

Removing capabilities from an OS because you warned us is no way to do business.

My 2010 Mac Pro can‘t run Catalina (well, officially) but do you see me crying how unfair Apple is? The move to 64 bit only was announced at least 3 years ago, so if you and Adobe couldn‘t be bothered then that‘s not on Apple.

As for „I have $400 worth of software“: So do I and more (and I‘m pretty sure you have more money than I do), plus SCSI cards and drives, MO drives and disks, jaz drive, Zip drive, bla bla bla - all obsolete. So what if your software doesn‘t run on the latest system? You can still use it, so what are you really complaining about?

One problem is the new M1 based machines can’t run a VM (yet).

I’m also in the camp that used Mojave in my main development machine (a MBP) though I did have Catalina and then BS in a VM. However, getting a new M1 mini which can’t boot below BS (to my knowledge) and can’t yet run a Mojave VM either. I’ll be keeping my MBP for awhile.

I also do/did my initial Windows testing in a VM. Don’t know yet what I will do if M1 mini becomes my main development machine. (That remains to be seen too, but based on Geekbench scores am hoping that will be the case.)

Actually you can run Windows on a M1 Mac using QEMU : 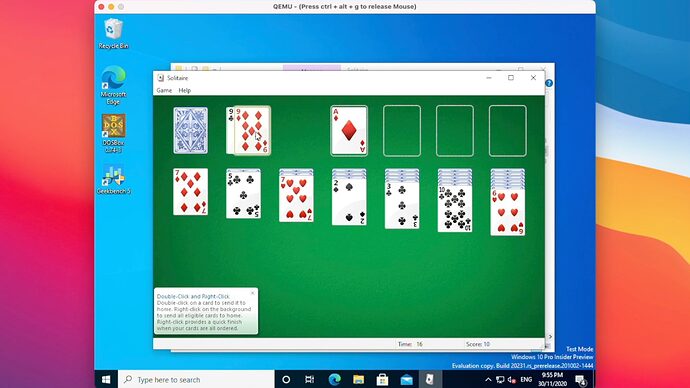 This walkthrough covers how to run ARM Windows on M1 Macs as a virtualization and also includes a look at real-world performance.

Actually you can run Windows on a M1 Mac using QEMU :

Well, even if true that would not let me run Mojave or other earlier macOS versions in a VM.

Also it is unclear from that article that you can actually run Windows x86 executables. It is running an ARM version of Windows. I really don’t care how Solitare runs. And I don’t have a license for ARM Windows anyway. If I can’t run the *.exes that I already own, and *.exes that I create in Xojo than there is no point in an ARM version to me.

I own enough Intel based Macs that I’ll be able to work out a compromise. But my point was to address @Markus_Winter’s claim:

One key phrase here is “if your Mac is young enough” and quite obviously that is NOT true of M1 based machines. At least yet.

Apple Silicon devices needs codesign apps. You cannot do that on Windows.
That’s probably the reason.

Just on an aside to the main discussion have you looked at the Affinity range of products - non subscription award winning alternatives to Adobe. I don’t know your use case for Adobe but I have several creative friends who have successfully moved across their businesses to these products.

One problem is the new M1 based machines can’t run a VM (yet).

Who says you only have to use one Mac? Many have older Macs around because they just keep running, but need a newer faster machine.

You do the same, thereby immediately negating your argument. That surely is one puzzling strategy to get your point across …

My take away from the blog was that the language on the Buy page should change from “Apple requires macOS apps to be built on a Mac.” to something else as it would seem from what is said in the blog that this isn’t the case. Might as well nip it in the bud before someone kicks off a thread about xojo not telling the truth again.

What Geoff writes in the blog has been true for a while. Sure, Xojo has worked its magic to provide Mac executable in an archives form, so when it arrives on the Mac all the characteristics of the Mac file system get there.

But that is hardly enough to sell apps.

Executables should be signed with a valid certificate, coming from Apple servers, for programmers having a current developer program subscription. But that is not enough. Now executables must be notarized, meaning uploaded to Apple servers, where they are blessed by the fruit to be able to run on Catalina and Big Sur.

So, indeed, if one is serious about providing programs for Mac, there is no other way. That said, on eBay or even Amazon, used Macs are very affordable.

I’m sure Xojo has good figures as well on how many people are really trying to compile for macOS from solely Windows or Linux. As sad as it is, that it doesn’t work any longer, I don’t expect that too many users have a need for it and I concur that no resources should be wasted on this “feature”.

On a side note: I would not want to install an app on macOS which hasn’t been thoroughly tested on macOS, besides the fact that such a developer could always use a Mac in the cloud or will find a mac user who could do the necessary final steps.

It is sad for Xojo (and as such for us supporters too), because it is a good “selling/marketing” argument for cross-platform tools if you can argue that it will compile on every platform for every platform - but in real life it has never been wise doing so.

My take away from the blog was that the language on the Buy page should change from “Apple requires macOS apps to be built on a Mac.” to something else as it would seem from what is said in the blog that this isn’t the case. Might as well nip it in the bud before someone kicks off a thread about xojo not telling the truth again.

The blog entry is very vague. Is LLVM too much work? We know that for signing a Mac is needed anyways.

Not sure, the blog entry says (paraphrase) “we could do it but don’t want to spend time on it as we would rather push for new features” (which is fair) vs the Buy page which says “Apple require macos apps to be build on a mac” which from what is said in the blog doesn’t seem true. Clear as mud.