Minimum Rect to enclose a String

Which DOES actually give the correct results in CARBON
but in COCOA the linespacing seems to be greater, thereby cutting off the bottom of the last line of text

Anyone else have this issue? Fixes? Workarounds? or file yet another bug report?

Isn’t there another property textheight. I seem to remember having these issues some time ago on cocoa. Can’t remember my fix I’ll have a look when I’m at my desktop

Anyone else have this issue? Fixes? Workarounds? or file yet another bug report?

Can you post the link to the bug report?

Text Height IS being calculated the same for both Carbon and Cocoa…
As a matter of fact ALL the metrics (StringHeight, StringWidth, TextHeight etc) seem to be the same.
What is DIFFERENT, is the LINESPACING when the text is actually drawn

I wonder if this is related to feedback://showreport?report_id=30154 ?

Sorry to necro this thread, but it’s now nearly four years later, and I’ve just tripped over the same issue… StringHeight returned correct results in Carbon, but appears to return incorrect results in Cocoa, in ways I don’t see how to easily work around. It’s not just the line spacing; the return value is too short even for a single line of text (though it gets increasingly more wrong the more lines you have).

Has anybody found a suitable workaround for this?

however.
I just used this as a test
paint event of a canvas

and the results looked correct to me,

I seem to recall that the problem occurs if the bottom line contains characters with descenders, eg. g, j, p, q, y.

Are you drawing something that uses a framing rect ?
It might be possible to use a label / text view, set the text, call a declare into sizeToFit and then ask the label /text view for its frame rect instead of using a graphics object
That way your measuring is done by the same layout engine

No, this one has nothing to do with NSTextView and NSLabel (though I’m sure there are other issues there). This is just a matter of getting g.StringHeight to match g.DrawString.

In some fonts (e.g. Arial), they do match; but in some common fonts like Helvetica and Times, they do not. If you try to use the StringWidth to draw a box around text drawn with DrawString in these fonts, it looks like this: 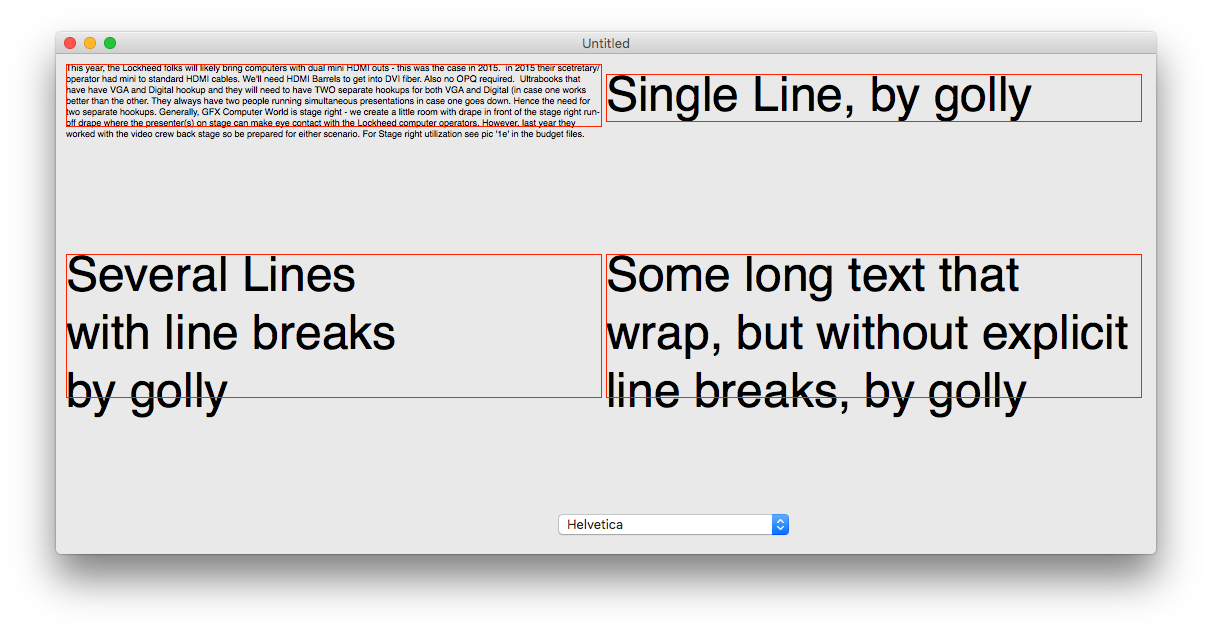 This makes it really hard to do things like lay out reports. I found it reported as feedback://showreport?report_id=42768 from early 2016.