And my own SSD might not be in an M1 Mac, but the Smart data read out is still wrong. That is not an assumption, that is a fact.

Again, the current behavior people found on those M1 machines seems not present on previous models. So, comparing bananas and oranges won’t give us a match. If your model has another problem (wrong SMART info

, I will give you the benefit of the doubt, I’ll accept it like a defective SSD), its another problem.

Maybe a bit less hype and trolling would be advisable.

Here you completely lost the argument.

That would mean that the Mac Mini was turned on and off more than once an hour on average in this case. That is not impossible, but hardly likely in a practical scenario.

Doesn’t the Mac power off the drive whenever it can to conserve power? I think the SMART power cycles refer to the drive’s power cycles, not the computer? Powering down the drive at least once an hour to save power seems entirely possible to me.

(I ran into that problem on an old Mac that had a spinning drive, Mac OS was so aggressive at turning off the drive whenever it could that the drives were burning through their maximum power cycles and I was chewing through drives. I ultimately solved it with a system command at boot that always left the internal drive powered on.)

Markus, I’ve been a fan of and steady user of Apple computers since the Apple II. I owned one of the first Macs in 1984, and I’ve been a Mac user ever since. I still own a working Powerbook 100 (remember those?), a working Powerbook 165c, and a working Titanium Powerbook G4. Only their batteries have failed. And, when they failed, they just stopped taking a charge. The didn’t bulge to the point of deforming the case, and they didn’t catch fire. But then, things started to change. I also have a 2008 15" MBP which had a logic board failure after 6 years and was told by Apple service that it was unrepairable due to unavailable parts. My current 2015 15" MBP has a flickering display problem and a bulging battery, making it unusable until I can get it in for service. I’ve also had two iPhones with bulging batteries.

You can call what I said in my earlier “Apple bashing” if you wish, but I think I’ve earned the credentials to do it. And I felt that my comment was a fair preamble for the statement that followed regarding Apple’s projected product lifespan.

When I read the first sentence of the linked article:
“If you have a new Mac, you probably think it’s going to last for years and years, but some new troubling data suggests that might not be the case.”
It seemed to be stating what is completely obvious to many of us: The expected lifespan of Apple products has been steadily decreasing over the years. I believe they have a goal of about 2-3 years, except maybe for their high end desktop units. So, an SSD that fails after 2 years is irrelevant, because by that time, the owner is expected to replace their entire computer with something new.

That the average life span goes down with increasing thinness and integration aka a worse repairability is a given, no argument there. However

what is completely obvious to many of us: The expected lifespan of Apple products has been steadily decreasing over the years. I believe they have a goal of about 2-3 years,

THAT is what puts you into trolling territory. So let’s have a look at your “obvious” and “2-3 years” claims:

And 6 years is what Apple officially supports for repairs (keeping replacement parts).

Assuming your 2015 MBP was the replacement for your 2008 MBP that one failed after 7 years.

Btw, going for a motherboard replacement on such an old machine? It would have been MUCH cheaper to buy the same or a newer MBP second-hand and sell the old one off for parts.

My 2010 MBP failed in 2018 after 8 years - do you hear me complaining? How long do you think these things last? Laptops aren’t desktops where you can mix and match components - they are highly integrated machines walking a tight-rope between performance and power consumption aka overheating. And with Intel CPUs getting worse and worse (and don’t mention GPUs - have you looked at the power consumption of the latest ones?) it simply could not go on - and I think Apple is doing the right thing with the M1.

The 2015 MBP is a model name, not the year it way made. They started making it in 2015 and continued making at least into 2016. I bought mine in late 2016, and my problems started when it was barely over 4 years old. Following the current trend of continuously decreasing lifespan, I’ll stand by my 2-3 year prediction for this year’s products. We can revisit this in 2-3 years, and if I’m wrong, I’ll be happy to admit I’m wrong.

Meanwhile, this is an interesting development which may have some interesting implications: 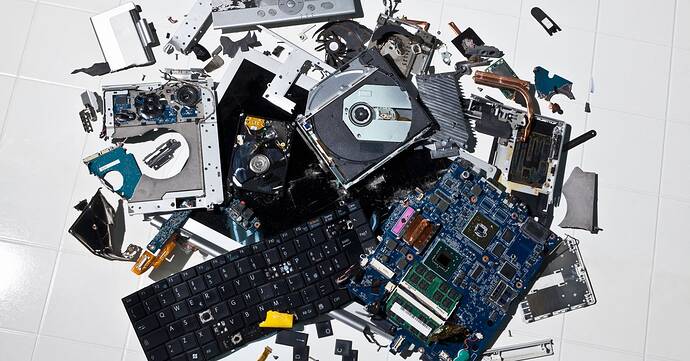 Why France’s New Tech ‘Repairability Index’ Is a Big Deal

my problems started when it was barely over 4 years old

Not what one would wish for but batteries are fickle and are considered consumables - so having to replace a battery after 4 years is not uncommon (so you are supposed to keep an eye on them, and the Mac usually tells you when it is time to replace it). I had replaced the battery in my 2010 MBP twice (and both times noted the swelling by the trackpad starting to behave erratically.

I would again say that your expectations of technology are unreasonable. A laptop is not the same as a desktop, and you fail to take the highly integrated nature and temperature problems into account. I would say 6 years is normal (for a Mac laptop), 4 years is unlucky (though if you haven’t kept an eye on the battery bulging then that might have caused other problems, so it could also be self-inflicted), and 8+ years is exceptional.

As for the flickering screen: likely the graphics card (probably not worth repairing) but could be the cable (goes through the hinge) - try with an external monitor. Or see if wiggling the screen into another position has an influence.

You can call what I said in my earlier “Apple bashing” if you wish, but I think I’ve earned the credentials to do it.

Following the current trend of continuously decreasing lifespan, I’ll stand by my 2-3 year prediction for this year’s products. We can revisit this in 2-3 years, and if I’m wrong, I’ll be happy to admit I’m wrong.

No. I bought my 2008 MBP, new, in late 2009. As stated previously, the year in the model name isn’t necessarily the year when it was made. And I didn’t actually complain that I got only six years out of it. My complaint is about the decreasing trend.

And as for who’s being a troll here, I won’t bother getting into that.