Hello again,
I am back with one more question on desktop app / Windows / German language.
I try to have my MenuItems with the german “Strg” instead of “Ctrl”, but can not find the way…
Was reading through the UserGuide Localization and also found some helpful articles here in the forum, but maybe I do not see “the wood because of the trees”…?

This works and shows in the menu as “Beenden Ctrl+Q”.
But if I need “Strg” instead of “Ctrl”, where do I have to set it? Or isn’t it possible?

Do shortcuts use the Windows language setting?

Hi Carsten,
yes, I use the Windows language settings (I guess…).
If it runs with these settings, on a german Windows it shows up with “Beenden Ctrl+Q”, no matter if I set the ShortCut setting to language “Default” or language “German”.
Any idea? 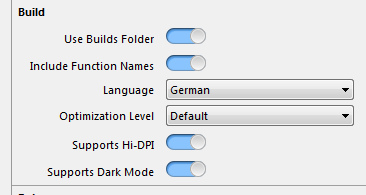 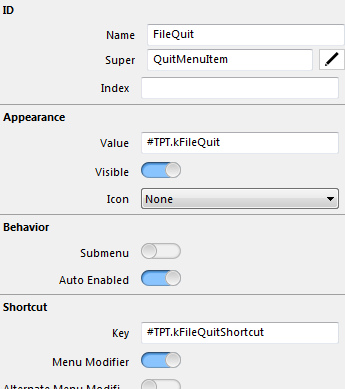 …where “TPT” is the app name…
Thanks for watching/assisting!
Regards. Thomas

Is German Windows 10 use Strg-Q (or any other shortcut) instead of Ctrl-Q ?

Oh, I see, you have to localize the shortcuts yourself.

Set Windows-Default-Strg+Q to Windows-German-…
I always use „Default“ for English language and localize the others.

Is German Windows 10 use Strg-Q (or any other shortcut) instead of Ctrl-Q ?

No idea about, since I never used Windows (the operating system) on a daily base.

But I’ve heard, the “Control” key on keyboards in Germany is labelled as “Strg”, which means “Steuerung”.

Exactly! But I often heard german guys say „String“ instead of „Steuerung“.

@Emile and Detlef: Yes, you’re both right… also right that many people call it “String” which is definately wrong. It’s to be called “Steuerung” which is the german word for “Control”.

Also all “standard apps” (like Editors or Adobe or MS Office etc) on Win10 and Win7 use “Strg + XX” for the menues.

When I want to do something and I do not know how to do it, I check with the OS (or other applications) to decide what to do. thus my question.

For Keyboard Shortcuts, I have mixed feelings because sometimes the developer use a Key that is available in its own keyboard, not not mine (Ctrl-[ or Ctrl-] for examples).

Also, the esc key on my Tastatur (Keyboard) have esc, but this is not what the Keyboard shortcut display in the Menu (the last time I checked, so many things have changed: check by yourself with the latest OSes).

Thomas: OK for Applications, but what about the OS by itself ?

But if it is usual to have Ctrl in the German Windows 10 / macOS, Linux continue to use that; else use your own.

@Carsten_Belling: I tried to use English as Default now. And I changed the german shortcut to “Strg + B” and left the english (default) to “Ctrl + Q”.
The app (on german Windows) then shows “Beenden Ctrl+B”…?
So the app uses the german localized “String” but still uses “Ctrl” instead of “Strg” as shortcut

@Emile_Schwarz: thank you for the input… I also make my thoughts about the OS. But I thought it should be easier, because in this case the “File > Quit” is a standard menu item in every application.
And also Xojo puts this as standard in the menu bar…
I am still thinking about, if Xojo (as an English API) on a german Windows causes this…?

@Carsten_Belling and all… I will report this.
Thank you all for your input. If there is a solution, I will post it here…

Which seems odd to me, as I don’t expect an API to be available to change this part of a menu item…

Is it perhaps because another API is used to create the item?